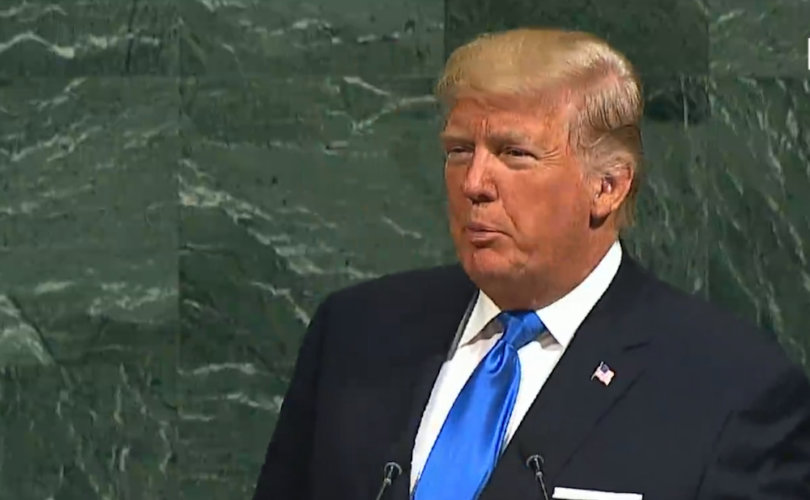 President Trump delivers an address to the United Nations.

NEW YORK CITY, September 24, 2019 (LifeSiteNews) – During his Tuesday address to the United Nations General Assembly, President Donald Trump called out “global bureaucrats” for trying to impose abortion on demand on nations that respect the right to life.

During remarks that came late in his wide-ranging speech, the president declared that Americans would “never tire of defending innocent life.”

“We are aware that many United Nations projects have attempted to assert a global right to taxpayer-funded abortion on demand, right up until the moment of delivery,” he said. “Global bureaucrats have absolutely no business attacking the sovereignty of nations that wish to protect innocent life. Like many nations here today we in America believe that every child, born and unborn, is a sacred gift from God.”

The day before, U.S. Secretary of Health and Human Services Alex Azar delivered a joint statement to the UN on behalf of 19 countries declaring there is “no international right to an abortion,” and condemning the use of “ambiguous terms and expressions, such as sexual and reproductive health and rights in UN documents, because they can undermine the critical role of the family and promote practices, like abortion.”

Azar affirmed the family as the “foundational institution of society,” and called on the international community to “join us in focusing on the important work of expanding health and opportunities for all people, and especially those in situations of risk and/or vulnerability,” and to concentrate “on topics that unite rather than divide on the critical issues surrounding access to health care.”

Last fall, the UN Human Rights Commission called on governments around the world to lift their restrictions on abortion in the name of “fundamental rights” and “gender equality.” In May, UN human rights spokeswoman Ravina Shamdasani declared that the international body is “very concerned” about pro-life laws sweeping across America.

The Trump administration has consistently worked to defend life and oppose abortion at the UN, from resisting pro-abortion agenda items and resolution language to affirming that abortion isn’t a human right and promoting abstinence education.

Trump’s latest remarks come a day after hosting a UN summit on religious freedom, where he observed that “too often, people in positions of power preach diversity while silencing, shunning, or censoring the faithful.”

“The Trump administration’s strong pro-life leadership on the world stage is no secret,” said Marjorie Dannenfelser, president of the Susan B. Anthony List. “From day one, President Trump has worked to restore respect for life as a foundational American value not only in our domestic policies, but in our international relations as well. Secretaries Pompeo and Azar have played key roles in advancing the president’s pro-life agenda and deserve credit for their efforts.”