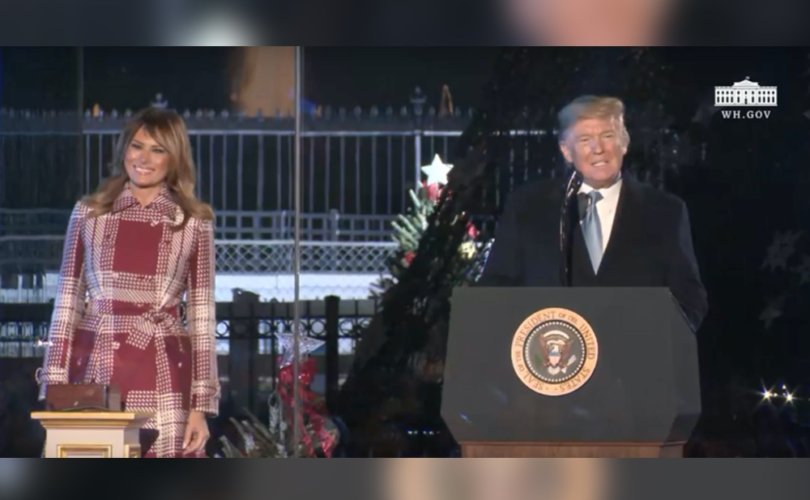 WASHINGTON, D.C., December 6, 2019 (LifeSiteNews) — As President Donald Trump, joined by First Lady Melania Trump, addressed a large crowd gathered on the Ellipse for the lighting of the National Christmas Tree, the president drew a connection between Christ’s humble birth and his cross.

“In 1923, President Calvin Coolidge lit the first National Christmas tree,” began President Trump. “Later that night, African-American community centers held an outdoor worship service on these grounds, and during that service the Washington Monument was illuminated with a beautiful cross, a powerful reminder of the meaning of Christmas.”

“More than two thousand years ago, a brilliant star shown in the east. Wise men traveled far and they came and they stood under the star where they found the Holy Family, in Bethlehem,” he continued. “As the Bible tells us, when the wise men had come into the house, they saw the young child with Mary His mother, and fell down and worshipped Him.”

“Christians give thanks that the Son of God came into the world to save humanity,” he said. “Jesus Christ inspires us to love one another with hearts full of generosity and grace.”

At Christmas we remember this eternal truth:  Every person is a beloved child of God. As one grateful nation we praise the joy of family, the blessings of freedom, and the miracle of Christmas.

On behalf of Melania and our entire family, Merry Christmas, and God bless you all.