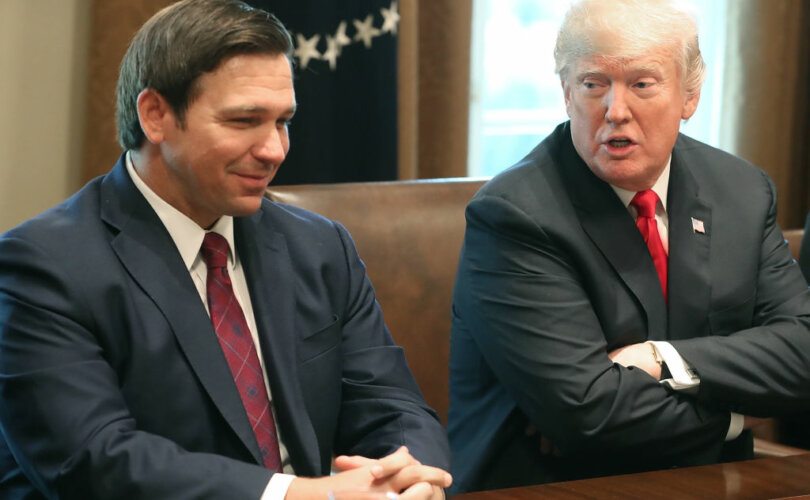 Florida Gov. Ron DeSantis (R) sits next to former President Donald Trump during a meeting in the Cabinet Room at the White House on December 13, 2018, in Washington, D.C.Photo by Mark Wilson/Getty Images

(LifeSiteNews) — Former President Donald Trump issued a strange warning to Florida Republican Gov. Ron DeSantis in an interview published Tuesday, threatening to release unflattering information about DeSantis if he runs against Trump for the GOP presidential nomination in two years.

Speaking to Fox News Digital, the 45th president denied he was in a “tiff” with the popular governor, whom he called a “fine guy.” But then he said that if DeSantis ran for president, “he could hurt himself very badly […] I think the base would not like it — I don’t think it would be good for the party.”

Trump added that if DeSantis runs, “I would tell you things about him that won’t be very flattering — I know more about him than anybody — other than, perhaps, his wife.”

Relatively few on social media were impressed by Trump’s threat, dismissing the possibility that Trump has damaging information on the family man and Navy veteran, and instead seeing the claim — and its timing — as petty, divisive, and indicative of fear for a potential DeSantis challenge.

That's how a frightened older man talks about a younger, stronger man he's afraid is going to pass him by.

Zero humility. His base is loyal but eroding continually. He would probably have my vote if he was the candidate but I think that’s a sure loss in 2024 if that’s the case.

How can anyone who calls themself a Conservative or Republican not abandon ⁦@POTUS45⁩ after this threat? His detractors were right. Trump thinks only of himself. “I’ll Release ‘Things About Him That Won’t Be Very Flattering’ If He Runs in 2024 https://t.co/RpIXgSCOjx

Apparently–and this is just too wild to believe–but apparently DeSantis used to be a Democrat, and even wrote a syrupy congratulatory note to Nancy Pelosi, and even–even!–invited the Clintons to his wedding to his third wife

Does he think this is going to intimidate DeSantis? That he’s going to shudder in fear?

As I said, Trump is barking up the wrong tree, here. This crap isn’t going to work on RD — who is enormously popular with the base.

Bring it on, old man. https://t.co/ae0QpsLedO

The fact that Trump attacked DeSantis the day before election day and ON election day says it all. He is a total narcissist and I’m over it. I’m not getting paid to say any of this like everyone else in your feed, I’m just so sick of this garbage.

The swipe comes days after Trump referred to DeSantis as “Ron DeSanctimonious” out of the blue at a Pennsylvania rally for his failed U.S. Senate endorsee, Dr. Mehmet Oz. The reaction to that attack was also largely negative.

Neither man has formally announced plans to run for president in 2024, but Trump has heavily hinted at it ever since losing his 2020 reelection bid and has teased a “big announcement” that most expect to make it official for November 15.

DeSantis, meanwhile, has refused to answer whether he’ll serve the entirety of his next four-year term as governor, and during last night’s victory speech for his landslide gubernatorial reelection was met with conspicuous chants of “two more years,” indicating that many of his most loyal supporters in the Sunshine State are willing to lose him as their governor for the sake of putting him in the White House.