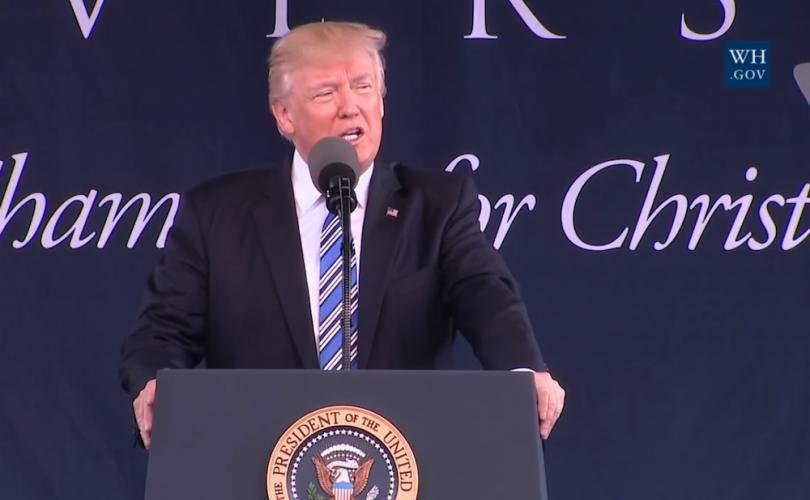 WASHINGTON, D.C., May 15, 2018 (LifeSiteNews) — The pro-life Susan B. Anthony List has announced that President Donald Trump will deliver the keynote address at its 11th annual Campaign for Life Gala next week, an honor that underscores the unconventional twists and turns American politics have taken over the past few years.

“President Donald Trump is governing as the most pro-life president in our nation’s history and Susan B. Anthony List is honored to receive him at our annual Campaign for Life Gala,” SBA List president Marjorie Dannenfelser said in the press release. “President Trump has diligently and successfully gone about fulfilling his promises to the pro-life voters who worked so hard to elect him, and it has been a privilege to stand with him to defend the innocent unborn.”

“We must reclaim the pro-life Senate majority to protect the gains made under President Trump and his administration and ensure that his pro-life agenda can continue unobstructed,” she continued. “Unborn children, their mothers, and pro-life taxpayers could not have a stronger ally in the White House than President Trump, and we look forward to the many victories we can achieve together.”

The president intends to take the opportunity to “discuss the many actions he has taken to protect the lives of the unborn and defend religious liberty,” according to White House principal deputy press secretary Raj Shah.

“Kellyanne’s presence on the Trump campaign was an indication that Donald Trump took the pro-life issue very seriously,” Dannenfelser explained. “Now serving as counselor to the president, Kellyanne plays a key role in helping President Trump to fulfill the four major promises he made to the pro-life movement during the campaign.”

A pollster and political strategist before joining the Trump campaign, Conway has been a longtime pro-life advocate. She addressed the March for Life in 2017 and reportedly made the case to Trump for cutting Planned Parenthood out of the Title X family planning program in a recent meeting.

Trump’s invitation to such a prestigious pro-life event is one of the most striking demonstrations of how unconventional the 2016 election was, and how dramatically Trump has defied expectations.

Many pro-life leaders, including Dannenfelser, vehemently opposed his candidacy in the Republican primary, citing his self-described “very pro-choice” past, including support for partial-birth abortion. Trump said he became pro-life in 2011, but distrust persisted throughout the 2016 presidential campaign, with a few pro-life commentators who identified with the “NeverTrump” movement urging their readers not to vote for him as late as November 2016.

But once Trump won the GOP nomination, most committed to working with him to secure firm pro-life promises and defeat his radically pro-abortion opponent, Democrat Hillary Clinton. Trump’s campaign brought in numerous pro-life leaders, including Dannenfelser, to advise him on life issues and demonstrate his commitment to keeping his promises.

Last month, just-retired Planned Parenthood CEO Cecile Richards called the Trump administration the “worst for women that I've seen in my lifetime,” a backhanded affirmation that he has more proactively opposed abortion-on-demand than his predecessors.