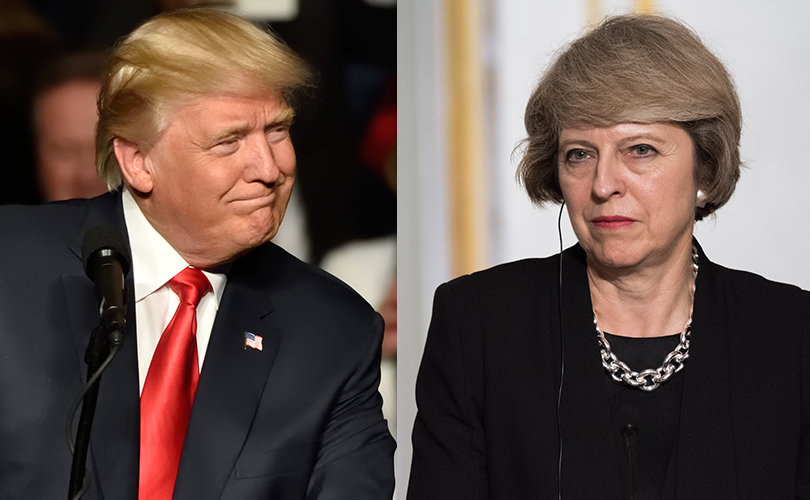 HAMBURG, Germany, July 7, 2017 (LifeSiteNews) – Multiple European media outlets are reporting that President Trump will have a private meeting with UK Prime Minister Theresa May about the fate of Charlie Gard, the baby ordered off life support against his wishes.

Trump and May are at the G20 summit, which is yesterday and today. The Daily Mail reported that the White House requested a one-on-one meeting between May and Trump. May is “braced for a grilling…on saving Charlie Gard” on Thursday, according to the Daily Mail. The Independent wrote that Trump is “reportedly planning to confront Theresa May.”

May said she's “confident” that the hospital fighting in court to remove the 11-month-old's life support is taking his “well-being” into consideration.

Trump, citing Pope Francis, said the U.S. would be “delighted” to help Charlie.

Thirty-seven members of European Parliament signed an open letter to May demanding Charlie be allowed to receive care.

Removing Charlie from life support against his parents' wishes “infringes Europe’s most fundamental values, particularly the right to life, the right to human dignity and personal integrity,” they wrote.

The Daily Mail reported that the White House has spoken to UK Health Minister Jeremy Hunt, to whom the open letter was also addressed.

Pro-lifers have protested the fate courts handed Charlie at Buckingham Palace and as of last night, the British embassy in Washington, D.C. Today several major American pro-life groups held a press conference to pray for and offer support to Charlie.

“The idea that a government may override and block parents’ decisions about the care for a child is horrifying,” leaders of the Susan B. Anthony List, March for Life, Concerned Women for America, Americans United for Life, and Students for Life of America said in a joint statement. “It is chilling that the UK court is allowing the London hospital to deny the family this option, or even the option to bring Charlie to spend his last hours at home. Our two nations have a proud and enduring history of protecting individual rights and respecting home and family.”

“We strongly support the offer of our government to assist Charlie and his parents in this exercise of their natural rights,” they said.

International activist Rev. Patrick Mahoney, anti-euthanasia advocate Bobby Schindler, and pro-life lawyer Catherine Glenn Foster are in London to try to help Charlie's family. Schindler is the brother of Terri Schiavo, who a judge ordered to be starved and dehydrated to death in 2005.