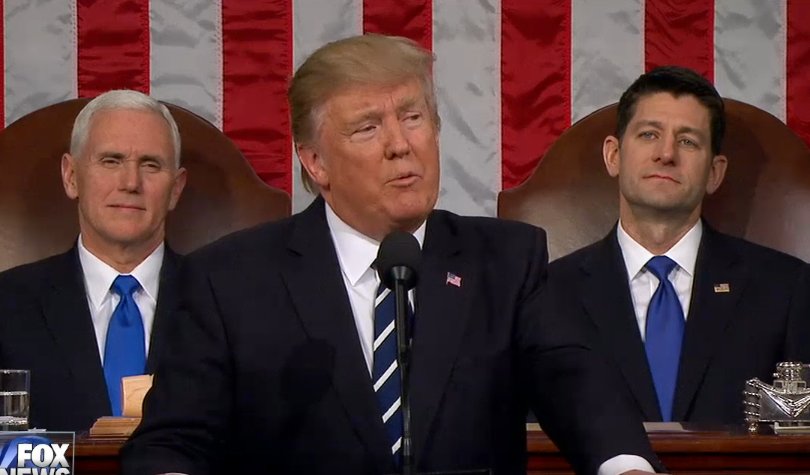 His speech didn't directly mention life, marriage, or religious liberty at all.

He asked the Senate to “swiftly approve” Judge Neil Gorsuch's nomination to the Supreme Court.

“I have kept my promise to appoint a justice to the United States Supreme Court from my list of…judges who will defend our Constitution,” said Trump. He said he was “greatly honored” that the late Justice Antonin Scalia's widow Maureen was in the audience.

“Her late, great husband Antonin Scalia will forever be a symbol of American justice,” he remarked.

The only reference that might be seen related to abortion was Trump's statement that we must “invest in women’s health and…promote clean air and clean water.”

“Women's health” is a euphemism often used by Democrats to mean abortion. Recently, pro-lifers have adopted the term in their calls to redirect funding from abortion business Planned Parenthood to federally qualified community health centers.

“I am hopeful that tonight's speech will provide new momentum toward fulfilling the GOP's promise of dismantling the disastrous Obamacare law and ending the forced partnership between taxpayers and organizations like Planned Parenthood,” said Tony Perkins, President of the Family Research Council. “We are committed to assisting the president and Congressional leaders in repealing and replacing Obamacare with a program that is patient-centered and respects the principle that federal funding and subsidies do not go to health care plans which include abortion.”

If we can “slash the restraints” on getting people with rare diseases life-saving drugs, “our children will grow up in a nation of miracles,” said Trump. At the end of his speech, he said, “we all are made by the same God.”

Trump also quoted John 15:13 when honoring U.S. Navy SEAL Ryan Owens. “For as the Bible teaches us,” he said, “there is no greater act of love than to lay down one’s life for one’s friends.”

Democrats booed Trump throughout his speech, but stood and clapped at some parts. At least several Democrats wore blue American Civil Liberties Union pins like Hollywood celebrities did at the Oscars. Some Democrat women wore all white in honor of the suffragette movement. (Many early feminists were against abortion, something that is apparently lost on them.)

Trump concluded, “We all are made by the same God…join me in dreaming big and bold and daring things for our country. Thank you, God bless you, and God bless the United States!”

Chris Wallace, a frequent Fox News critic of Trump, said Tuesday night's address was by far the best speech Trump has ever given and the best Joint Session presidential address that he has ever seen by any president. Trump emphasized many of the issues he ran on, like national security and curbing illegal immigration. He also called for unity and decried recent threats against Jewish community centers.

A full text of Trump's remarks is available here.