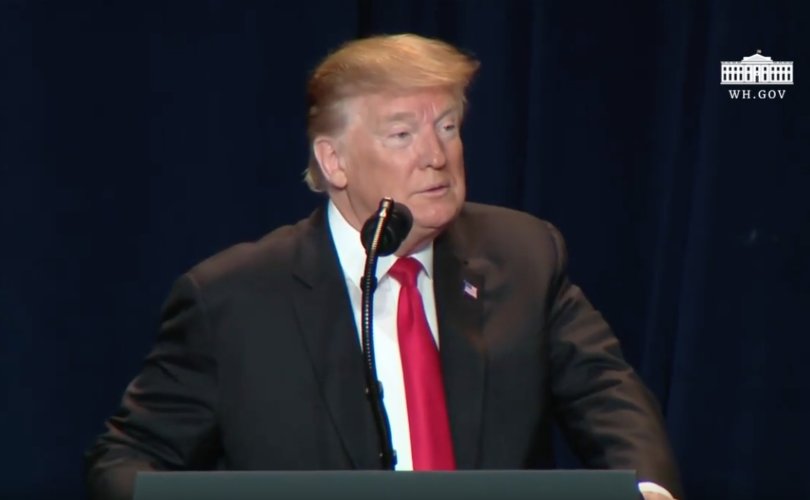 “I will never let you down,” Trump promised as he took the podium, before thanking the event’s organizers and highlighting other public officials in attendance, including Vice President Mike Pence and his wife Karen. The president then reiterated several of the themes from his State of the Union address earlier this week.

“Since the founding of our nation many of our greatest strides, from gaining our independence to abolition [to] civil rights, to extending the vote to women, have been led by people of faith and started in prayer. When we open our hearts to faith, we fill our hearts with love,” he said. “Many of the people in this room lead and support the charities and faith-based institutions that bring hope to the lives of our citizens, comfort to those in despair, and solace to those in grief, aid to those in need, and a helping hand to the struggling people all around the world, of which there are so many.”

“As president I will always cherish, honor, and protect the believers who uplift our communities and sustain our nation,” he promised. “To ensure that people of faith can always contribute to our society, my administration has taken historic action to protect religious liberty.”

The president then highlighted Melissa and Chad Buck, a Michigan couple and the parents of five adopted children through Catholic Charities, which is now locked in a court battle over its insistence on placing children with a mother and a father.

“My administration is working to ensure that faith-based adoption agencies are able to help vulnerable children find their forever families, while following their deeply-held beliefs,” he said.

“My administration is also speaking out against religious persecution around the world, including against religious minorities, Christians, and the Jewish community,” Trump continued, as well as “continuing to fight for American hostages who have been imprisoned overseas for their religious beliefs.” He cited the case of Andrew Brunson, the Protestant pastor who spent almost two years in a Turkish prison until his release last year. Brunson was also attending the breakfast.

“As part of our commitment to building a just and loving society, we must build a culture that cherishes the dignity and sanctity of innocent human life,” Trump continued. “All children, born and unborn, are made in the holy image of God. Every life is sacred, and every soul is a precious gift from heaven. As the Lord says in Jeremiah, ‘Before I formed you in the womb, I knew you. Before you were born, I set you apart.’”

He then highlighted two more guests, Nikki and Tyler Watkinson, whose baby Grayson was born at 24 weeks in their car during a blizzard-swept trek to the hospital.

On Tuesday, Trump called on Congress to ban abortions past 20 weeks, a proposal the modern Democrat Party opposes. During his State of the Union, he singled out Democrats in New York and Virginia for promoting legislation effectively allowing abortion until birth.

“We are blessed to live in a land of faith where all things are possible. Our only limits are those we place on ourselves,” the president concluded. “Let us pray for a future where every child has a warm, safe, and loving home […] and let us always give thanks for the miracle of life, the majesty of creation, and the grace of Almighty God.”