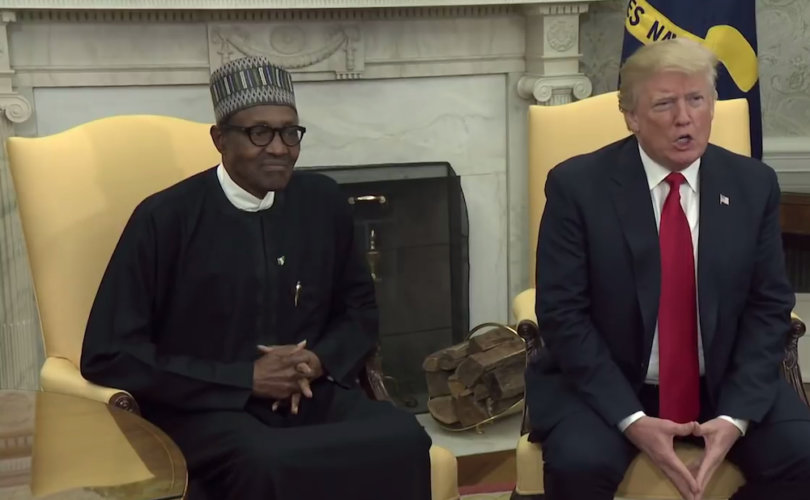 The comments came during a joint press conference with Nigerian President Muhammadu Buhari at the White House. The two privately discussed a range of issues, according to CBS News, including trade, immigration laws, and working together to combat terrorism.

“We’ve had very serious problems with Christians who have been murdered, killed in Nigeria,” Trump said. “We’re gonna be working on that problem, and working on that problem very, very hard, because we can’t allow that to happen.” According to the International Society for Civil Liberties & the Rule of Law, almost 16,000 Christians have been murdered in Nigeria since 2015.

Buhari responded by expressing gratitude to the United States for military assistance and vowed to work to combat groups such as Boko Haram.

However, Open Doors USA president and CEO David Curry argued Sunday in USA Today that Buhani himself deserves a share of the blame for the bloodshed.

“In the past year alone, Open Doors received reports from its in-country sources of at least 611 deaths in the latest spike of militant Fulani unrest,” Curry wrote. “These attacks played out in more than 50 incidents, where churches and homes were burned and residents were violently murdered, raped and kidnapped.”

However, he suggested that Fulani herdsmen’s crimes have largely gotten a pass while Boko Haram’s have not, partially because Buhari has Fulani ancestry.

“Victims have told Open Doors they believe the Fulani are being helped by other forces — and that the Nigerian government is turning a blind eye to the violence,” Curry continued. “Some victims of the attacks contend weaponry used in the violence suggests external assistance, and the growing consensus is that Buhari’s government is doing little to nothing to stop the violence.”

Specifically, Curry called on Trump to insist that Buhari guarantee equal protection to Nigerians of every ethnicity and religion, accept investigations to ensure the laws are enforce impartially, expand joint American-Nigerian violence prevention and law-enforcement training initiatives, and ramp up distribution of humanitarian aid.