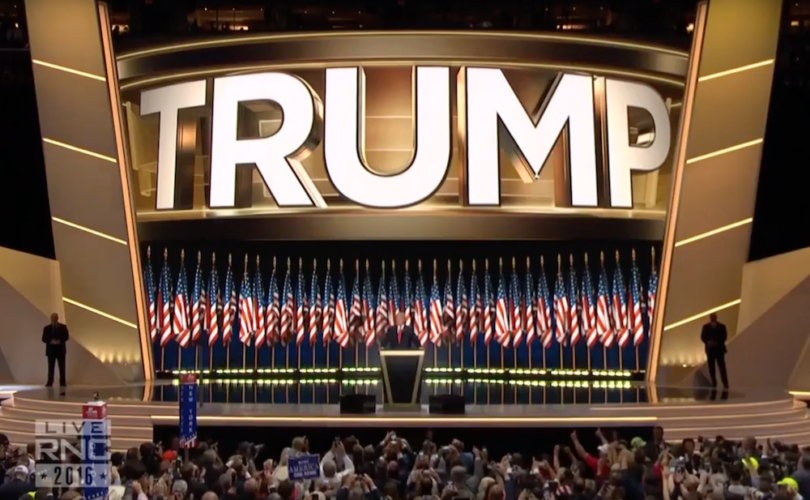 CLEVELAND, July 22, 2016 (LifeSiteNews) – If elected president, Donald Trump said he will push for the repeal of a law that pro-life and pro-family leaders say stops them from communicating their message, effectively changing the nation, and fully serving as leaders in the pulpit.

He told GOP delegates on Thursday night that “the evangelical and religious community” has “so much to contribute to our politics, yet our laws prevent you from speaking your minds from your own pulpits. An amendment, pushed by Lyndon Johnson, many years ago, threatens religious institutions with a loss of their tax-exempt status if they openly advocate their political views.”

“Their voice has been taken away,” Mr. Trump said. “I am going to work very hard to repeal that language and to protect free speech for all Americans.”

President Johnson pushed Congress to pass the Johnson Amendment during his fierce primary battle against Dudley Dougherty. The IRS explains that the rule means that religious institutions that receive a tax-exempt status may not “participate in, or intervene in (including the publishing or distributing of statements), any political campaign on behalf of (or in opposition to) any candidate for public office.”

Together with a pledge to appoint originalist justices to the Supreme Court, the IRS measure was one of the few appeals made to conservative Christians during his 75-minute-long presidential acceptance speech. He did not mention the sanctity of life, but did invoke “the LGBTQ community” and appealed for support from Democratic Socialist Bernie Sanders’ supporters.

Over the years, thousands of pastors have participated in the Alliance Defending Freedom’s call to ignore the rule and publicly support the candidate most aligned with their conscience on “Pulpit Freedom Sunday.”

“America’s founders would have agreed, a pastor is the one who should determine what he says from the pulpit, not the federal government—and that is as it should be,” said Erik Stanley, who headed the ADF’s Pulpit Initiative, in 2012.

Trump’s opposition to the Johnson Amendment won him support within the social conservative movement, including some speakers at last night’s GOP convention.

Jerry Falwell Jr. of Liberty University, one of the first high-profile evangelicals to endorse Donald Trump, said that repealing this Eisenhower-era IRS restriction will create a “revolution for conservative Christians” that will be “huge.”

Family Research Council President Tony Perkins, speaking privately and not in his capacity as the leader of any nonprofit, said he would be “voting for Donald Trump in November, and I will urge my fellow Americans to do the same.” “Our freedom to appeal to and unite under God has been under steady assault,” he said. “Donald Trump has committed to upholding and protecting this first freedom and therefore our ability as citizens to unite our nation once again under God.”

Like vice presidential nominee Mike Pence, Trump attacked his Democratic rival for her foreign policy record while serving in the Obama administration, especially for her role in the Benghazi affair. “This is the legacy of Hillary Clinton: death, destruction, terrorism, and weakness,” he said. “But Hillary Clinton’s legacy does not have to be America’s legacy.” Like Gov. Pence’s speech and others during the 2016 RNC, the keynote speech was interrupted by a Code Pink protester, this time the group’s co-founder Medea Benjamin. Trump paused briefly during the commotion, then thanked law enforcement for doing their duty, as Republican delegates chanted “USA!”

As the speech continued, he supported school choice, a pause on immigration “from any nation that has been compromised by terrorism until such time as proven vetting mechanisms have been put in place,” and transforming free trade agreements into “great trade agreements.”

After the speech, he was joined by Gov. Pence and members of his family as fireworks exploded and falling confetti blanketed cheering delegates.

He smiled as the arena's speakers played the strains of the Rolling Stones song, “You Can't Always Get What You Want.”

Obama wants your pastor to promote ObamaCare from the pulpit