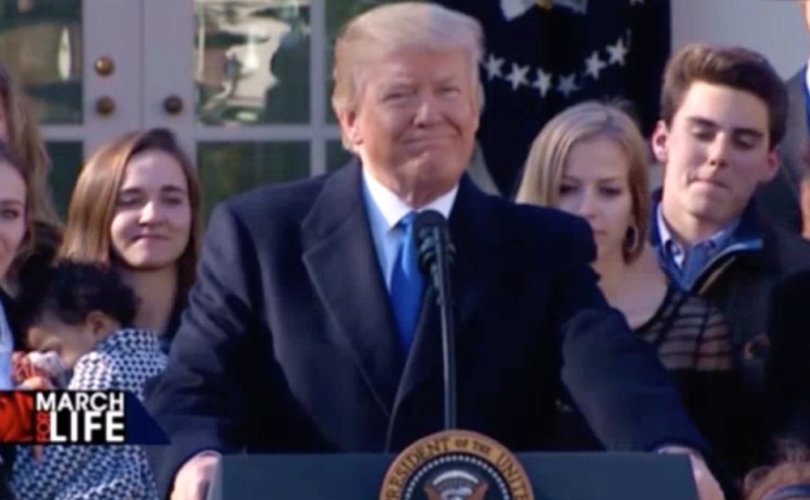 “Had a great call with Catholic Leaders and Educators earlier today,” tweeted the president on Saturday.

“I will be online tomorrow at 10:15 A.M. (Eastern) for Sunday Mass celebrated by Cardinal Dolan at St. Patrick’s Cathedral in New York City,” he added, and then encouraged his followers, “Join me: https://saintpatrickscathedral.org/live.”

Had a great call with Catholic Leaders and Educators earlier today. I will be online tomorrow at 10:15 A.M. (Eastern) for Sunday Mass celebrated by @CardinalDolan at St. Patrick’s Cathedral (@StPatsNYC) in New York City. Join me: https://t.co/pTZMmBF9hb pic.twitter.com/iQy5iH5Lk6

On Sunday afternoon, the president again took to Twitter: “Cardinal Dolan, Thank you for a great call yesterday with Catholic Leaders, and a great Service today from St. Pats NYC!”

.@CardinalDolan Thank you for a great call yesterday with Catholic Leaders, and a great Service today from @StPatsNYC!

During Saturday’s conference call with over 600 Catholic leaders and educators, President Trump addressed their concerns about the future of Catholic schools affected by coronavirus pandemic lockdowns across the country.

“This is ‘tough times’ for all churches,” declared Dolan, who said that like most families, parishes and dioceses live from paycheck to paycheck. “Our ordinary sources of income aren’t coming in.”

“Who do people go to in times of trial?” asked Dolan. “Most often they’re knocking on the rectory door or calling their pastors and saying, ‘We’re having trouble making rent,’ or ‘We need some help with groceries.’”

“While the income is less, the demands are even greater,” said Dolan, who explained that this is a “delicate topic. I always hesitate to bring it up because we’re concerned about a lot more than money.”

“This is a tough financial time for the churches,” he reiterated.

Cardinal Dolan said that while his archdiocesan schools can cover their fiscal obligations for the remainder of this academic year, he’s concerned about next year. Because of the impact the coronavirus lockdowns have had on the jobs and incomes of Catholic families, they won’t be able to include Catholic school tuitions in their budgets for next year.

“In addition to the many other things I’m praying for — the sick, those heroic people tending to them,” said Dolan, “I’m also  beseeching the Lord for a return to financial stability for His Church.”

During the call, the president also took the opportunity to repeatedly emphasize his support for the pro-life movement and school choice, according to Crux, which had obtained a recording of the call.

Trump: If a Democrat wins the White House in November, ‘you’re going to have a very different Catholic Church’

Crux characterized President Trump’s comments as “attempting to paint a stark contrast between his administration and what a Democratic presidency could mean for Catholics.”

[T]he president’s most frequented theme in his opening remarks was that of his commitment to pro-life cause, saying that it has “been at a level that no other president has seen before, according to everybody.”

“I’m just saying what everybody is saying,” he said, citing the fact that he was first sitting president to address the March for Life in person in January, the annual event in protest of the legalization of abortion by the Supreme Court in 1973. …

[The president said] Democrats “want abortion and they want it now and they want it to go up to the end of the ninth month and beyond,” and referenced the comments of Virginia Democratic Governor Ralph Northam who faced backlash last year for his support of third trimester abortion. …

“I hope that everyone gets out and votes and does what they have to do,” he then said of the November election. “You’re going to have a very different Catholic Church,” he warned if he is defeated.

In addition to Cardinal Dolan, also on the call were Boston’s Cardinal Séan O’Malley; Los Angeles archbishop José Gomez. who serves as president of the United States Conference of Catholic Bishops (USCCB); and Bishop Michael C. Barber of Oakland, chair of the USCCB committee of Catholic Education, according to Crux.

Joining the president on the White House’s end of the phone line were secretary of education Betsy DeVos and secretary of housing and urban development Ben Carson.