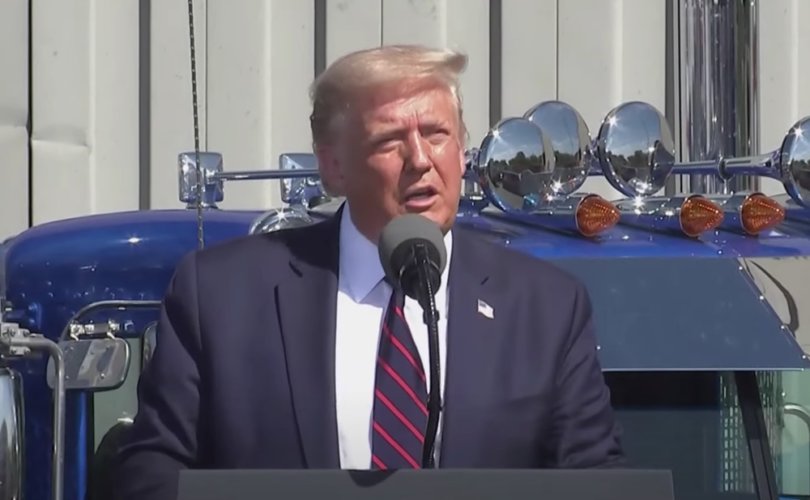 “They want to cancel you, totally cancel you, take your jobs, turn your family against you for speaking your mind while they indoctrinate your children with twisted, twisted world views that nobody ever thought possible,” he said.

The American president held a campaign rally in the small borough last Thursday. Five miles from Scranton, the birthplace of Democrat presidential nominee Joe Biden, Old Forge is home to just under 8,000 people. The closed rally at Marriott Building Products included 200 workers, but thousands more waited outside and lined Trump’s route to the venue.

Trump’s hour-long speech, delivered shortly before Biden’s speech in Delaware officially accepting his party’s nomination for president, mocked his rival as “Slow Joe” and “Sleepy Joe” and attacked him as the choice of “the radical left.”

“Joe Biden is a puppet of the radical left movement that seeks to destroy the American way of life they don’t understand,” he said.

The president stated that Biden had pledged to raise taxes by $4 trillion and would squander it on the “Green New Deal.” He also suggested that a Democrat administration would “eviscerate” the Second Amendment, give free healthcare to illegal immigrants, expand so-called sanctuary cities, force taxpayers to pay for late-term abortions, and shut down the “energy fields” of Pennsylvania.

He also stated that the Democrats had plans to abolish the police, Immigration and Customs Enforcement (ICE), and prisons.

“The only thing they’re not abolishing is our taxes,” Trump quipped, “because your taxes are going up at a level you’ve never heard of before.”

More than once Trump addressed the recent mob violence across the nation and said that America’s survival is at stake in November’s election.

“If you want a vision of your life under [the] Biden presidency, think of the smoldering ruins in Minneapolis, the violent anarchy in Portland, the bloodstained sidewalks of Chicago, and imagine the mayhem coming to your town and to every single town in America,” he said.

“There’s only one thing standing between your family and the radical left-wing mob, and that’s your vote this November.”

The president said that the Democrat-controlled cities stricken by lawlessness could appeal to Washington, and his administration would put an end to the problems. He stated that his policies had already put a stop to one form of vandalism.

“You’ll notice they’re not knocking down statues and monuments any more,” he said.

“[It’s] because I took an old law and I signed a nice new executive order. And then I explained, ‘Ten years if you knock down a federal statue or monument.’”

He believes that this measure stopped a march on Washington, D.C. and plans to destroy more monuments there.

Trump also compared the luxurious security in which rich liberals live to the precarious situation of most American people.

“A lot of people got rich and got powerful at your expense,” he told the crowd.

“Now these same liberal hypocrites want to open our borders and let violent mobs rule the streets while they live in Waldorf compounds and communities,” he continued.

“They want to defund police while hiring private security. They wanted to let rioters burn churches while jailing you for praying in your church [during lockdown]. They want to abolish school choice while sending their children to the best private schools in the land. They want to cancel you.”

Trump stressed that he had a good relationship with North Korea and said that there would have been “a hell of a war” had Obama stayed in office or Hillary Clinton won in 2016. He also underscored the strength of the economy before the “China virus” hit and his support of American manufacturing jobs against “China’s rampant cheating, plunder, and theft.” The president also said he had signed “four historic directives” to lower the cost of prescription medication, angering drug companies. He also promised to end reliance on China and other countries for essential drugs.

Regarding the coronavirus, the president called for the “opening up” of more states and said that Biden wanted to impose a “permanent lockdown combined with a socialist takeover of the U.S. economy.” He suggested that, despite “the plague,” the economy is improving. He also stated that “everybody knows that the only way that [the Democrats] are going to win is by a rigged election.”

New York Times bestselling author and political commentator Dan Bongino posted a montage of quotes of this speech to his Facebook page, saying this speech was very important.

“Remember when I told you the fight was coming to your front door?” he asked supporters.

“President Trump understands this. He knows what's at stake.”