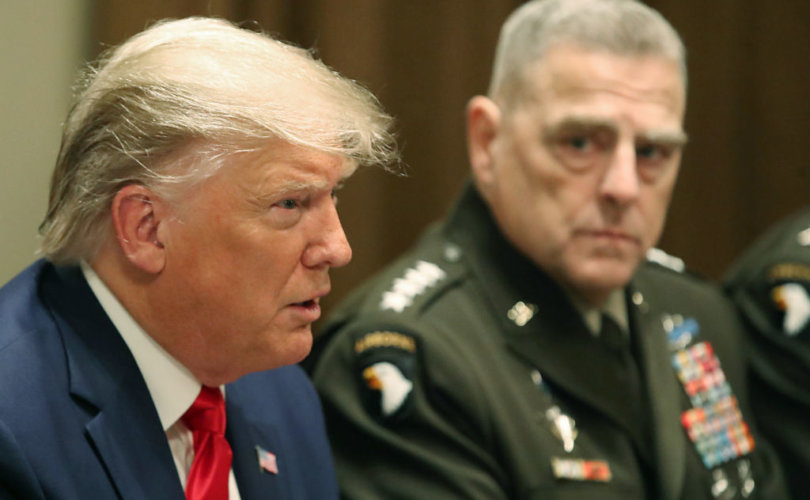 LONDON (LifeSiteNews) — A major British newspaper published an article that challenged the legitimacy of Joe Biden’s election to the U.S. presidency in November, calling it a “fraud” and claiming that “Trump was right.”

The article was published by journalist Rod Liddle in the Sunday Times on September 26 under the headline: “So Trump was right: the election was rigged. And our next one will be too.” It endorsed Trump’s allegations that Biden did not win the last U.S. presidential election fairly, and warns that the same thing could happen in the U.K.

Liddle began his article by contrasting Biden’s promise to “undo the moral and national shame of the previous administration” with his actual presidential record so far, pointing out that the 78-year-old Democrat seems to be getting a free pass for his mismanagement of the border crisis. Liddle argues that, had this happened under Trump, “Hollywood and the partisan coastal media would have imploded in a plasma of outrage,” whereas Biden appears to have “largely escaped their censure.”

“I’m not sure, either, that the little old business in Afghanistan entirely banished America’s moral and national shame,” Liddle continued, in reference to Biden’s appalling mishandling of the withdrawal of troops from Afghanistan, and added “nor Biden’s inability to remember where the hell he is or who he is talking to; nor his geopolitical pig ignorance or his tendency to doze off at crucial moment.”

Liddle also wrote that “if that election had taken place in any other country, it would have been called ‘unfree,’’ before expressing concerns that the same thing could happen in the U.K.

“As more and more evidence emerges, it terrifies me that the same thing could happen here,” he said.

The censorship that Trump faced in the mainstream media and on social media platforms in the runup to the election was a sign, according to Liddle, that the candidates were not treated on equal terms.

“We already knew, even as Biden was declaring victory, that Facebook and Twitter had cut off Donald Trump’s access to the electorate,” Liddle wrote, before arguing that Trump was “deliberately rendered voiceless” while stories that surfaced about Biden and his son were labeled as “fake news.”

Liddle also referred to another article published in Time magazine in February entitled “The Secret History of the Shadow Campaign That Saved the 2020 Election,” which, notwithstanding claims that Trump was “assaulting democracy,” also contains indications that “there actually was a conspiracy — a secret coalition of chief executives, labor unions, left-wing pressure groups, and media companies — to manage what information was available to the voting public.”

“Its aim, as The Wall Street Journal put it, was to ‘suppress unwanted elements of U.S. political conversation,’” wrote Liddle, who commented, “what a wonderful phrase.”

Liddle continued his analysis by mentioning recent revelations that Gen. Mark Milley, the Joint Chief of Staff Chairman, worked behind Trump’s back during his term to undermine him, even going as far as conspiring with China, which many see as an act of treason.

“Twice Milley called Chinese diplomats to let them know that he would countermand any order from Trump to attack China — which seems to a lot of U.S. conservatives to be an act of pure treason,” Liddle wrote. Milley also went behind the president’s back to connive with leading House Democrat Nancy Pelosi.

The Sunday Times columnist, who is no fan of Trump, attributes the efforts to undermine the former president, even with complete disregard for democracy, to the idea propagated in the media before the election that Trump was “unhinged”

Liddle goes on, asking,“Was he? I don’t know. He didn’t seem terribly hinged to me, but then Americans rarely do. But more unhinged than your average American — or Joe Biden?”

Liddle concluded by expressing concerns that few on the left seem able to admit that there were abnormalities during the election.

“What worries me most is that so few liberal commentators seem capable of understanding that this was a grotesque manipulation of democracy,” he stated, “and yet surely, they must see it, no matter how appalling Trump seemed to them (and indeed, quite often, to me).”

He pointed out the irony that those who claim to protect democracy are the ones attacking it.  “Instead, those very acts that subverted democracy are depicted as valorous.”