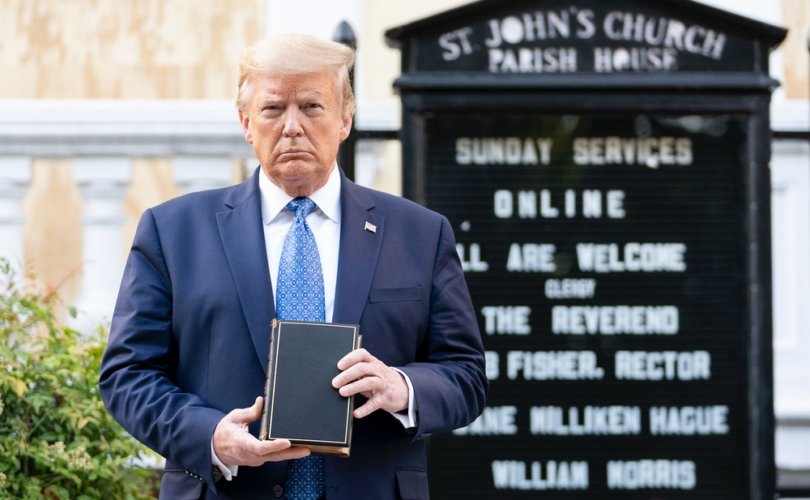 WASHINGTON, June 11, 2021 (LifeSiteNews) — U.S. Capitol Police’s use of gas to disperse protestors in the historic Lafayette Park area of the nation’s capitol was unrelated to former President Donald Trump’s plans to visit St. John’s Church last summer, according to a newly-released inspector general’s report from the U.S. Department of the Interior.

Trump walked from the White House to St. John’s Church on June 1 of last summer as a show of support after the historic complex was set on fire by protesters the night before. The act, which critics assailed as a mere photo opportunity, became even more controversial thanks to confrontation between protesters in the area and Capitol police turned violent prior to the walk.

Democrats, the mainstream media, and their “NeverTrump conservative” allies such as The Dispatch senior editor David French accused Trump of using violence against peaceful protesters for mere self-promotion, despite the fact that on-the-ground reporting from the Washington Examiner’s Jay Caruso and Tim Carney (who have been highly critical of Trump) suggested that the use of tear gas came after the “peaceful” protesters started throwing eggs at officers, not before. Further, D.C. Police have not conceded that the gas used was tear gas.

Nevertheless, the talking point persisted for the following year, which saw Trump lose reelection due to a variety of factors, including claims that he was an authoritarian willing to use violence against peaceful protesters.

This week, however, months after Trump’s ouster from the White House, Interior Department Inspector General Mark Lee Greenblatt released a report concluding that U.S. Park Police “cleared the park to allow a contractor to safely install antiscale fencing in response to destruction of Federal property and injury to officers that occurred on May 30 and May 31,” and that “USPP officials had made those decisions and had begun implementing the operational plan several hours before they knew of a potential Presidential visit to the park, which occurred later that day.”

While the report offers no conclusions as to whether the force used was appropriate, it concludes that “the evidence did not support a finding that the USPP cleared the park on June 1, 2020, so that then President Trump could enter the park.” In fact, it concluded that Park Police’s failure to clearly communicate its plans to the Secret Service and other law enforcement entities “may have contributed to confusion during the operation and the use of tactics that appeared inconsistent with the incident commander’s operational plan.”

“This was obviously a particularly a tumultuous event in a tumultuous time,” Interior Dept. Inspector General Greenblatt says. https://t.co/E9YPpDV2U5 pic.twitter.com/lydxZqdxyC

“Thank you to the Department of the Interior Inspector General for Completely and Totally exonerating me in the clearing of Lafayette Park!” Trump said in response to the report. “As we have said all along, and it was backed up in today’s highly detailed and professionally written report, our fine Park Police made the decision to clear the park to allow a contractor to safely install antiscale fencing to protect from Antifa rioters, radical BLM protestors, and other violent demonstrators who are causing chaos and death to our cities. In this instance, they tried burning down the church the day before the clearing. Fortunately, we were there to stop the fire from spreading beyond the basement — and it was our great honor and privilege to do so.”

Many who pushed claims that peaceful protesters were gassed on Trump’s behalf, such as French, have yet to publicly retract or apologize for their false statements as of the time of this writing.