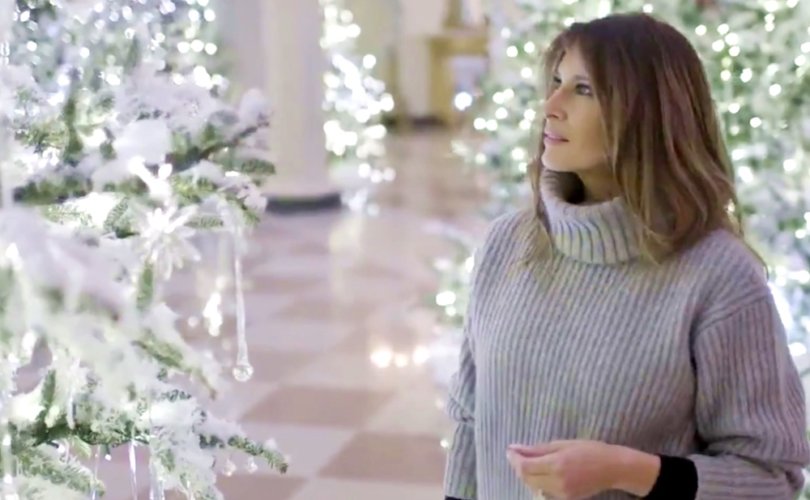 WASHINGTON, D.C., November 27, 2017 (LifeSiteNews) – A new video of the White House’s Christmas decorations shows a beautiful traditional nativity set with a baby Jesus in a manger.

The video zooms in on the Blessed Virgin Mary, St. Joseph, and baby Jesus of the White House nativity set. Baby Jesus is crowned.

The decorations are up! @WhiteHouse is ready to celebrate! Wishing you a Merry Christmas & joyous holiday season! pic.twitter.com/d6ZuyeFvrw

It’s also customary for a giant gingerbread version of the White House to be created and displayed. This year’s version seems to make an appearance in the First Lady’s promotional video. It is largely white with red wreaths in the windows. Later in the video, the actual White House is shown to have very similar decorations.

When Melania first came out to greet some children working on the Christmas decorations some of them kept repeating that she looked like an angel.

“Are you the first lady?!” a boy asked as he embraced Melania Trump during a White House Christmas event.

“She seriously looks like an angel,” another child said https://t.co/mRDUlWZ3kl

Trump’s first official Christmas card hasn’t been released yet. The Obamas’ Christmas cards over the years referred to the “holidays.”