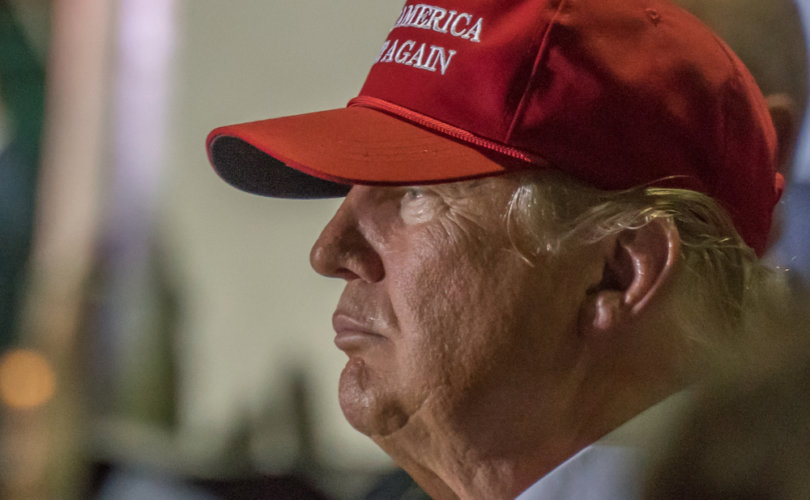 'It's a new issue, and right now I just don't have an opinion,' Trump said on Friday.Windover Way Photography / Shutterstock.com

WASHINGTON, D.C., May 17, 2016 (LifeSiteNews) – Donald Trump said on Monday that he would repeal President Obama's federal guidelines requiring all public schools to open their showers, restrooms, and locker rooms to members of the opposite biological sex.

But when asked if the issue of transgender people being able to use the restroom of their choice is “overblown,” he replied, “I don't think so, because you've got to protect all people.”

“I don’t view it as civil rights or not civil rights,” he said in an interview with The Washington Post inside Trump Tower. “I think it’s something where we have to help people, and hopefully the states will make the right decisions.”

States “should come up with a policy that’s going to work for everybody and protect people,” he said.

He added that, as far as he knew, he had never had any contact with a transgender person, but “it's an issue that I'm studying very closely.”

The presumptive Republican presidential nominee has nuanced his position somewhat since the issue came roaring into public consciousness.

On last Friday's “Fox and Friends,” Brian Kilmeade asked if boys should use the “bathroom of the gender they were born with.”

“It's a new issue, and right now I just don't have an opinion,” Trump responded.

“As the presumptive Republican nominee, shouldn’t Trump have a more solid opinion on this polarizing issue?” asked Phil Silver at Conservative Review.

Mr. Trump did express stronger views on the “Today” show on April 21, when he said North Carolina had been wrong to enact H.B. 2.

“Leave it the way it is,” he said. “People go, they use the bathroom that they feel is appropriate. There has been so little trouble.”

He said that Bruce Jenner, who has legally changed his name to Caitlyn, would be free to use the female restroom at Trump Tower. Jenner later posted a viral video of himself doing just that.

That evening, the Trump campaign pivoted to a more traditionally Republican position that states should determine their own policies, a view he has since studiously maintained.

On Monday's “Good Morning America,” George Stephanopoulos asked if the billionaire believes transgender restroom use is a matter of “civil rights.”

Even weeks after the presidential primaries have come to an end, Mr. Trump's views continue to clash with those of Senator Ted Cruz, who made some of his first public statements since suspending his campaign earlier this month. While Sen. Cruz believes the matter should be left to state and local governments, he said the notion violates common sense.

“We have entered the world of politically correct lunacy,” Sen. Cruz said on Saturday at the 2016 Texas State Republican Convention. “There is nothing in the Constitution that gives the president the power to be the bathroom police for this country. This is an embodiment of just how off track we’ve gotten.”