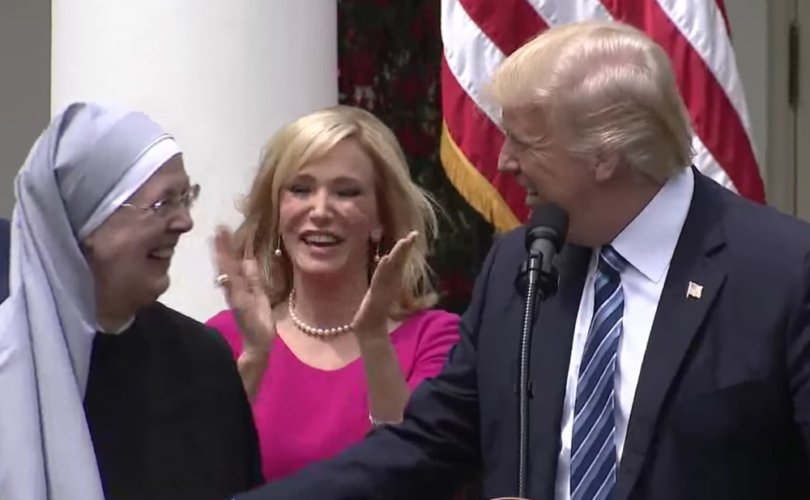 "Come on up here sister,” Trump says, inviting Little Sisters of the Poor to the podium to shake his hand. May 4, 2017.

“At a very high level, this appears to be a common-sense, balanced rule and a great step forward for religious liberty,” Mark Rienzi, senior counsel at Becket (formerly the Becket Fund for Religious Liberty) and lead attorney for the Little Sisters of the Poor, told reporters on a call.

“The rule is great, at least what I can glean of it in the first hour,” said Riezni.

But “given what the government is admitting in this document,” it seems unlikely the Trump Department of Justice will continue fighting groups like the Little Sisters of the Poor, said Rienzi. Hopefully, he said, a final court order will be issued applying the new guidelines, and the issue will be put to rest.

Rienzi explained that with this new rule, the federal government admitted it broke the law by trying to place an undue burden on the free exercise of religion.

“This was always a big, unnecessary, and divisive culture war fight,” he said, noting there are many ways for people to access contraception without forcing Catholic nuns to participate.

Rienzi explained that the new rules don’t exempt all employers from the requirement that they provide contraception to their employees – just ones with religious or moral objections.

“What [Trump's HHS department] did was they added a real and true religious exemption,” he said.

In May 2016, the Supreme Court ordered the government and the Little Sisters to work together to find a way for all women to have free contraception, abortifacients, and sterilizations without religious employers being forced to participate.

The Obama administration had admitted to the Supreme Court that there are many ways in which contraception is accessible.

“What we see today is really the resolution of that process,” said Rienzi.

“The religious objectors were already protected by (court) injunctions, so everyone who was getting contraceptives through their employer will still keep getting them,” explained Rienzi, countering the liberal myth that suddenly now many corporations will try to scrap their birth control coverage.

The new rule exempts from the contraceptive mandate a “small subset of people who sued who already had” protection from it as the court cases were underway, he said. He noted the vast majority of employers in U.S. have no religious or moral objection to contraception. In order for them to be able to be exempt under the new rules, they would have to suddenly say that their pro-contraception beliefs of the past five years have been wrong and that they have a religious or moral objection.

Rienzi said this is extremely unlikely.

“The companies who had objections to it were known,” he said.

“We just need a final (court) order resolving this five-year saga,” and then the Little Sisters of the Poor won’t spend the rest of their lives with their eyes on the federal register “worrying about when next mandate will come out,” said Rienzi.

Mandate was an attempt to ‘directly confront the Catholic Church’

“Today’s action is more than regulatory relief for people of faith, it is a ray of sunshine signaling to faithful Americans that they need not fear government bullying like that endured by the Little Sisters of the Poor,” said Maureen Ferguson, senior policy adviser with The Catholic Association. “After years of Obama era encroachment on religious liberty, we are finally seeing a welcome shift in government policy that once again respects the rights of conscience. Our country is made better when people of faith participate in the public square and contribute to the needs of our nation, running charities, hospitals, and schools.”

“Let’s not forget that the origin of this mandate was an Obama election-driven strategy to directly confront the Catholic Church,” said Andrea Picciotti-Bayer, legal advisor to The Catholic Association. “This new rule honors the freedom to act consistent with one's beliefs.”

Kristan Hawkins, president of Students for Life of America, said the pro-life generation she represents is grateful to Trump “for following through on his promises to address the injustice created by the mandates in Obamacare.”

Hawkins also praised the Trump administration for another action it took today addressing “the stealth abortion coverage in some of the qualified health plans by separating abortion, which is not healthcare, from the core list of things covered.”

“Now, Americans will be informed if a plan they choose has abortion coverage in it, and they will need to pay separately for that coverage,” she explained. “Tax dollars will not be spent providing abortion coverage that people may not even know that they have in their plan.”

The Trump administration’s “attacks can feel never(-)ending,” Planned Parenthood President Cecile Richards wrote in a furious email to supporters after the news broke.

“Women’s bodies and healthcare should not be subject to the opinion of their employer,” Eleanor Smeal of the misleadingly-named Feminist Majority Foundation wrote in an email defending the subjection of employers to contraception users’ opinions. “For right-wing, self-righteous politicians to even suggest so is misogynistic, patronizing lunacy.”

Americans United for Separation of Church and State has already announced its plans to sue the Trump administration, arguing it’s “discrimination” for religious employers (whose employees chose to work for them) to not fund contraception.