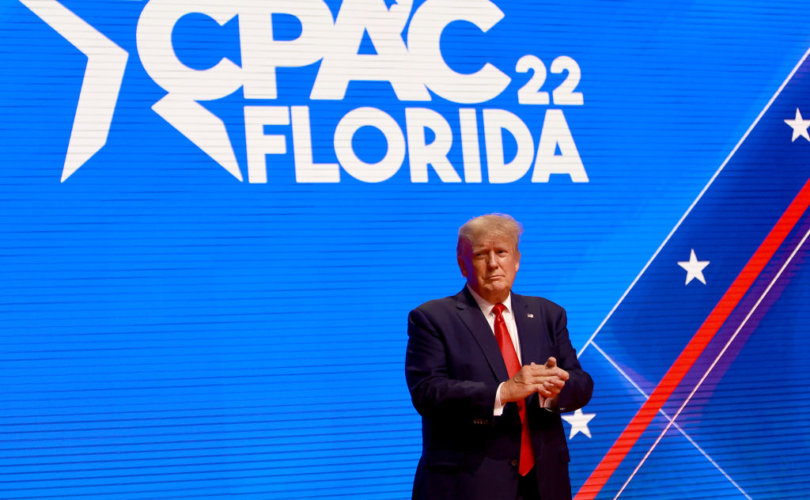 ORLANDO, Florida (LifeSiteNews) — Former President Donald J. Trump kicked off his speech at the Conservative Political Action Conference (CPAC) on Saturday night by promising to retake the White House in 2024 in order to rid the government of the “power-hungry ruling class” and America of “left-wing tyranny.”

“We did it twice, and we’ll do it again,” promised the former president. “We will defend the Constitution, the right to life, and the right to keep and bear arms [and] we will charge China billions of dollars for unleashing the virus upon the world.”

During a wide-ranging one-and-a-half-hour speech that was frequently punctuated with cheers and applause, Trump launched into a litany of the harms that powerful leftist elites are inflicting on those who resist them:

When we win, we will defeat this corrupt political establishment … The Washington swamp knows that we are coming to break its grip on power forever.

“You can take the five worst presidents in American history and put them together, and they would not have done the damage that Joe Biden and his administration have done in just a very short 13 months,” he said.

“Under Bush, Russia invaded Georgia. Under Obama, Russia took Crimea. Under Biden, Russia invaded Ukraine,” noted Trump. “I stand as the only president of the 21st century on whose watch Russia did not invade another country.”

“Putin is playing Biden like a drum,” he added, “and it’s not a pretty thing to watch.”

“We’re going to kick the Biden crime family out of the White House in 2024,” he predicted.

‘You’re either with the peaceful truckers, or you’re with the left-wing fascists’

“The tyranny we have witnessed in Canada in recent weeks should shock and dismay people all over the world. In an advanced western democracy, the peaceful movement of patriotic truckers, workers, and families protesting for their most basic rights and liberties have been violently put down,” said Trump.

“Their assets and life savings have been frozen. They have been slandered as Nazis, racists, and terrorists. They’ve been arrested and charged with phony crimes, they’ve been falsely accused with loyalty to foreign powers,” he noted. “They’re being hunted down like enemies of their own government.”

“You are either with the peaceful truckers, or you are with the left-wing fascists,” said Trump. “We stand with the truckers and the Canadian people and their noble quest to reclaim their freedom.”

‘Time to declare independence from every last COVID mandate’

“It’s time to declare independence from every last COVID mandate,” he declared. “The emergency is over, and we will submit to this left-wing tyranny no longer.”

“The people who are masking our children … we will never forget what they did,” he said. “We will hold them accountable at the ballot box this November.”

“The COVID mandates are just one part of a much larger crisis. The radical left is trying to replace American democracy with woke tyranny. They want to do the same thing to America that Trudeau has been doing to Canada,” said Trump.

“Our mission in 2022 and in 2024 is to take on this radical and power-hungry ruling class and to deliver them an electoral defeat so resounding that they are exiled into political oblivion never to return again.”

The former president indicated how insane it is that mothers and fathers now have to find themselves having to fight to maintain “parental rights” as they combat the left’s extreme woke ideologies — including transgenderism and critical race theory — which have overtaken many school systems.

“We have to defend parent’s rights against these lunatics and maniacs,” said Trump. America’s moms and dads should get a veto over anyone teaching far-left gender ideologies to their children without parental consent.”

“Any parent who objects to the radical indoctrination in their children’s classroom should be able to take their share of taxpayer dollars and spend it at the public, private, charter, or religious school of their choice.”

“The days of Big Tech censoring the voices of the American people are numbered” said Trump, adding that a future Republican-controlled Congress should launch an investigation to “get to the bottom of Big Tech’s 2020 election interference.”

“Let’s find out who made the decision to censor the Joe and Hunter Biden corruption bombshell,” which Trump said amounted to about a 15-point swing in Joe Biden’s direction on election day. He called it “the largest illegal campaign contribution in American history.

“Let’s do a full forensic audit of the $417 million given by Mark Zuckerberg, spent to take over local election offices in key Democrat counties,” he added. “We need a full accounting of all of the illegitimate turnout efforts — illegal drop boxes and ballot harvesting — that’s taken place.”