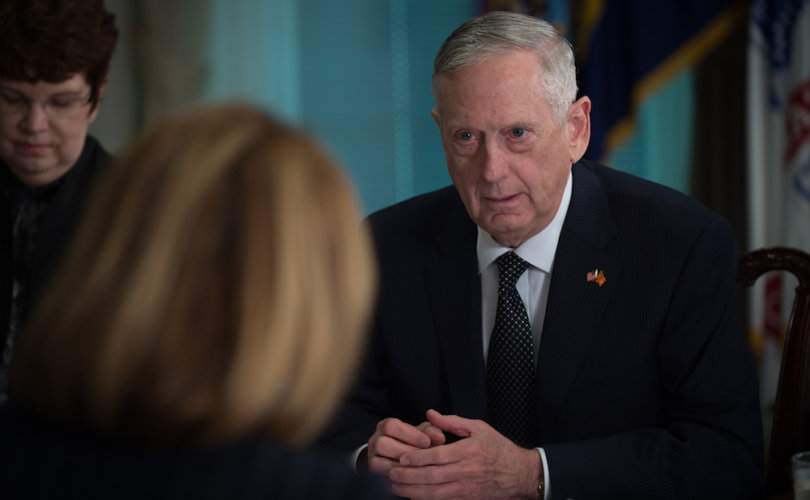 Mattis declared that “current policy with respect to currently serving members will remain in place,” which some conservatives said defies Trump’s tweeted declaration July 25 announcing the reversal of Obama’s pro-transgender policy. It read in part: “Please be advised that the United States Government will not accept or allow transgender individuals to serve in any capacity in the U.S. Military.“

Last week, the President issued formal guidance for his new policy, which overturns the 2016 pro-“transgender” order from the Obama administration, but he gave Mattis wide latitude in implementing it. The Trump directive, slated to go into effect Jan. 1, 2018, bans DoD funding for grotesque and expensive transsexual “sex reassignment” surgeries, but it leaves it up to Mattis to “determine how to address transgender individuals currently serving in the United States military.”

The following statement was issued yesterday by  Mattis on implementing the new policy:

“The Department of Defense has received the Presidential Memorandum, dated August 25, 2017, entitled “Military Service by Transgender Individuals.” The department will carry out the president’s policy direction, in consultation with the Department of Homeland Security. As directed, we will develop a study and implementation plan, which will contain the steps that will promote military readiness, lethality, and unit cohesion, with due regard for budgetary constraints and consistent with applicable law. The soon arriving senior civilian leadership of DOD will play an important role in this effort. The implementation plan will address accessions of transgender individuals and transgender individuals currently serving in the United States military.

“Our focus must always be on what is best for the military’s combat effectiveness leading to victory on the battlefield. To that end, I will establish a panel of experts serving within the Departments of Defense and Homeland Security to provide advice and recommendations on the implementation of the president’s direction. Panel members will bring mature experience, most notably in combat and deployed operations, and seasoned judgment to this task. The panel will assemble and thoroughly analyze all pertinent data, quantifiable and non-quantifiable. Further information on the panel will be forthcoming.

“Once the panel reports its recommendations and following my consultation with the secretary of Homeland Security, I will provide my advice to the president concerning implementation of his policy direction.  In the interim, current policy with respect to currently serving members will remain in place. I expect to issue interim guidance to the force concerning the president’s direction, including any necessary interim adjustments to procedures, to ensure the continued combat readiness of the force until our final policy on this subject is issued.”

In a series of three tweets on July 26, President Trump announced, “After consultation with my Generals and military experts, please be advised that the United States Government will not accept or allow transgender individuals to serve in any capacity in the U.S. Military. Our military must be focused on decisive and overwhelming victory and cannot be burdened with the tremendous medical costs and disruption that transgender in the military would entail.”

Since then, open rebellion to the Trump “transgender” reversal has surfaced in the Washington bureaucracy, even at the highest levels of the military, as LGBTQ groups moved to sue Trump to block his ban. Coast Guard Commandant Paul Zukunft seemingly defied his Commander-in-Chief by saying he would “not break faith” with “transgender” members serving in the Coast Guard.

Meanwhile, conservative experts on military matters like Elaine Donnelly, founder and president of the Center for Military Readiness (CMR), question why Mattis and the Trump administration are moving so slowly to reverse the most controversial elements surrounding Obama’s pro-“transgender” and pro-LGBT military policies. For example, a U.S. Army tolerance program tells women soldiers that they need to accept gender-confused, biological men in their showers, bathrooms, and barracks as part of a controversial policy to build “dignity and respect” for “transgender Soldiers.”

“The Trump administration has a mandate to restore the strength of our military and to put an end to political correctness in the Pentagon,” states a July CMR special report urging the President and military chiefs to “Revoke Problematic Transgender Policy Directives and Instructions. ”

On hearing Mattis’ implementation directive, social conservative leaders signaled immediately that any effort by the DoD brass to water down or jettison Trump’s policy barring “transgender” service will be met with fierce opposition.

“If Secretary Mattis undermines the president’s efforts to protect the privacy and safety of our troops from this radical transgender social experiment, I fear he’d alienate the president from his entire Christian and conservative base,” Matt Barber, a constitutional attorney and founder and editor-in-chief of Barbwire.com, told LifeSiteNews.

He called on Trump to follow through and end Obama’s politically correct policies in the Armed Forces.

“What happened to the military under President Obama was a travesty,” Starnes said on his radio show today, “turning our military into a social engineering petri dish.”