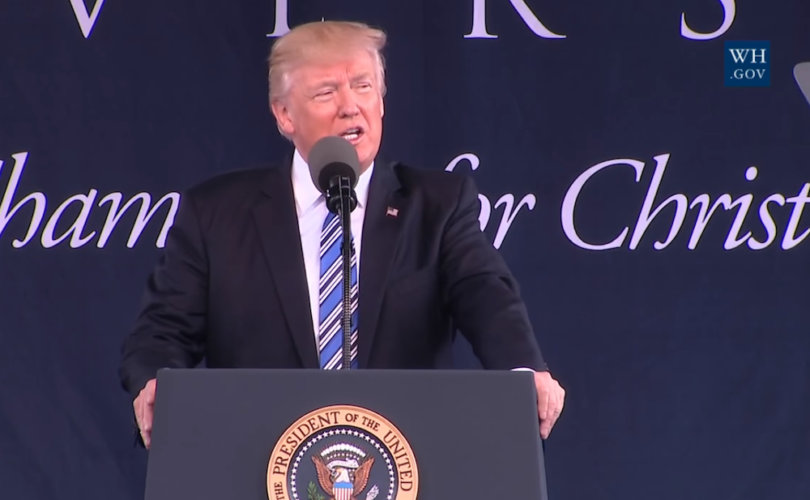 May 15, 2017 (LifeSiteNews) — President Trump celebrated Mother’s Day with a White House proclamation bereft of LGBTQ references in a departure from predecessor Barack Obama, who previously used the mom-honoring day to promote homosexuality and gender-confusion, including biological men claiming to be women.

“Today and every day, we honor the incredible women whose influence on the world is beyond measure. They brighten America's future by shaping the character of each new generation,” states the Trump proclamation. “They lead us through our deepest lessons about perseverance and hard work, preparing us for life's responsibilities.”

Compare that to Obama’s final Mother’s Day proclamation in 2016 in which he wrote: “Regardless of sexual orientation, gender identity, or marital status, mothers have always moved our Nation forward and remained steadfast in their pursuit of a better and brighter future for their children.”

As LifeSiteNews reported at the time, Obama’s 2016 reference to “transgender” “mothers” was the “first-ever explicit reference to biological males acting as mothers in the history of the annual presidential message.”

“With Obama, everything is political – employed to advance his perversely transformative agenda,” even Mother's Day, Kupelian said.

The year before that, in 2015, Obama again insinuated LGBTQ politics into the wholesome day honoring moms, hailing all mothers “[w]hether married or single, LGBT or straight, biological, adoptive, or foster.” Obama’s “usage appeared to highlight the mother's sexual orientation, not their underlying biology,” LifeSiteNews reported.

In 2014, Obama still went political but did not bring up homosexuality or transgenderism, declaring, “My administration is proud to fight alongside women as they push to close the gender pay gap, shatter glass ceilings, and implement workplace policies that do not force any parent to choose between their jobs and their kids.”

More than any president in U.S. history, Obama cheered on the “gay” and “transgender” sexual revolution, whether it was a pro-homosexual “marriage” light show turning the White House into the “rainbow flag,” or going out of his way to promote homosexual-led families at the White House Easter Egg Roll.

Trump has for the most part not used his bully pulpit in this manner, although he did disappoint social conservatives as president-elect by declaring the issue of homosexual “marriage” “settled law.”

“It’s so refreshing to have a president who doesn’t speak in special interest code, as Obama did. Thank you, President Trump, for appreciating the genuine role of mothers, not phony special interest agenda-driven rhetoric,” Linda Harvey, president of Mission America, told LifeSiteNews. “Our former president believed transgender 'mothers’ were really moms, when they are men posing as women.”

Harvey, who has two children and two grandkids herself, said, “Motherhood is a distinct biological reality, and for those moms who have adoptive children, being a female is still essential to authentic motherhood.”

“Our deep appreciation for the strength and spirit of mothers and their resolve to do what is right for their children and families cannot be overstated.  They are often the first to lend a hand during hard times and the first to celebrate our proudest victories. The boundless energy of our mothers inspires us to be people of action, people who strive relentlessly toward our goals. Above all, they teach us the power and joy of unconditional love.”

A liberal site slammed Trump’s statement as “light on substance.” But Harvey, whose Christian group opposes LGBTQ activism, called the Trump approach a return to honoring “normalcy” and the “natural family,” i.e., a mom, a dad and their children.

“We need to return to a place where we honor normalcy and sanity in the natural family, and stop pretending that sexual immorality and deviance are OK,” she said. “No, kids are not OK with moms who proudly proclaim lesbianism or who deliberately exclude the presence of a father in a child’s life.”

“Kids are not OK with fathers who pretend to be second mothers, or with a mom who deserts that role to pose as Father No. 2,” Harvey continued. “No wonder so many young people are seriously troubled.”

Trump also tweeted Sunday: “Wishing @FLOTUS Melania and all of the great mothers out there a wonderful day ahead with family and friends! Happy #MothersDay”

Congress designated the second Sunday in May each year as “Mother’s Day” in 1914.

Meanwhile, Media Research Center’s NewsBusters blog reported that “Liberals are putting their loathing of Donald Trump into everything,” including Mother’s Day. It reported on an article in the liberal Huffington Post by Sarah Ruiz-Grossman headlined: “Resist Trump With These Mother’s Day Cards For Muslim And Immigrant Moms: And they’re made by queer and transgender artists of color.”

MRC writer Melissa Mullins responded to the HuffPo article: “Leave it to the left-wing Huffington Post to take a day where mothers across America can get some recognition and gratitude, and turn it into just another occasion to denounce American bigotry and closed-mindedness, which they would surely argue includes millions of bigoted mothers.”