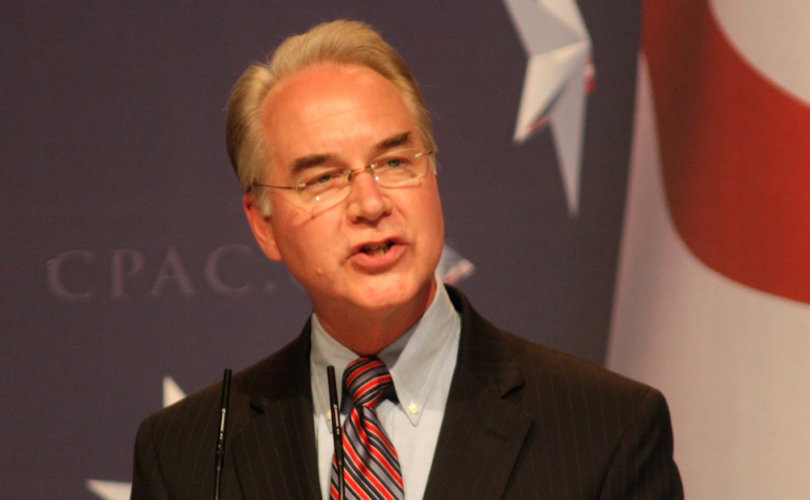 Price is an orthopedic surgeon and the Chairman of the House Budget Committee. He has said “there’s nothing more precious or more worth defending than the sanctity of life” in a video made to commemorate the 43rd anniversary of Roe v. Wade.

“Now, more than ever, the American people and the lives of countless Americans not yet born need folks who will stand up for life,” said Price. In this video, he defended the Hyde Amendment, which prevents taxpayer funding of Medicaid abortions.

“There is nothing more fundamental to our humanity than to defend life,” Price commented on the 2011 March for Life. “The March for Life movement has for nearly four decades given a voice to those who have no voice. It is a privilege to stand together with thousands of Americans in solidarity and faithful commitment to our solemn duty to protect and defend the lives of the most innocent among us.”

Price reacted to Obergefell v. Hodges, the Supreme Court decision redefining marriage in all 50 states, by decrying the use of the Court system as “a systematic springboard to enact agendas outside the democratic and legislative structures of government.”

“Thirty States have held statewide ballots banning gay marriage since the year 2000, and yet legislating from the bench has superseded both public approval and our elected representatives,” said Price. “This is not only a sad day for marriage, but a further judicial destruction of our entire system of checks and balances.”

“Anyone who has not viewed the disturbing videos recently released should do so,” he said. “It is only with that knowledge that one can know, in horrific detail, the barbaric practices being committed with federal taxpayer dollars. These actions cross a moral line beyond comprehension. The revealing picture is of a supported routine for abortion practices that result in the harvesting and sale of baby parts, some of which are secured in barbaric process. This, if seen, will shake anyone's conscience. Today, I voted to end taxpayer funding for the organization responsible and add criminal penalties in the event of born alive abortions.”

“Chairman Price, a renowned physician, has earned a reputation for being a tireless problem solver and the go-to expert on healthcare policy, making him the ideal choice to serve in this capacity,” said President-elect Trump. “He is exceptionally qualified to shepherd our commitment to repeal and replace Obamacare and bring affordable and accessible healthcare to every American. I am proud to nominate him as Secretary of Health and Human Services.”

Marjorie Dannenfelser, the President of the pro-life political group the Susan B. Anthony List, said Price is an “excellent choice” for HHS secretary.

“He has an 100 percent pro-life record and is well positioned to champion truly comprehensive health care,” said Dannenfelser. “He helped lead the charge to defund Planned Parenthood through budget reconciliation, setting the stage for President-elect Trump and a pro-life Congress to reallocate those funds to support comprehensive women's healthcare. As HHS Secretary, he will play a key role in developing a robust health care reform proposal that protects life and consciences, while promoting options for low-income individuals and families.”

Price has a zero percent rating from Planned Parenthood. The Human Rights Campaign, a homosexual lobby group, also gives him a score of zero.

Planned Parenthood President Cecile Richards said Price’s nomination “poses a grave threat to women’s health” because he “could take women back decades” and “millions of women could be cut off from Planned Parenthood’s preventive health services.” Planned Parenthood is America’s largest abortion provider and aborts over 300,000 babies annually.

“It is an honor to be nominated to serve our nation as Secretary of Health and Human Services. Thanks to President-elect Trump and Vice President-elect Pence for their confidence,” said Rep. Price. “I am humbled by the incredible challenges that lay ahead and enthusiastic for the opportunity to be a part of solving them on behalf of the American people. There is much work to be done to ensure we have a healthcare system that works for patients, families, and doctors; that leads the world in the cure and prevention of illness; and that is based on sensible rules to protect the well-being of the country while embracing its innovative spirit.”

As HHS Secretary, Price will have enormous influence on American healthcare policy. The department oversees Medicare, Medicaid, the Food and Drug Administration, and the Centers for Disease Control and Prevention.