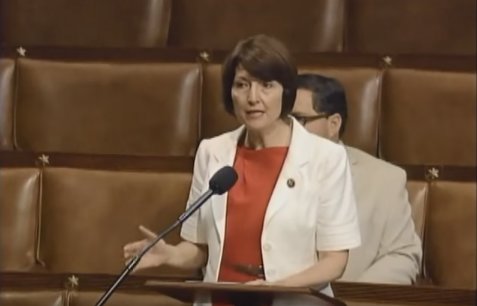 Update December 15, 2016 at 10:39 a.m.: President-elect Donald Trump just announced he intends to nominate Rep. Ryan Zinke, R-MT, as Secretary of the Interior. Zinke has a pro-life voting record with National Right to Life and is strongly opposed by EMILY's List, a pro-abortion political group. He has voted to defund Planned Parenthood five times.

McMorris Rodgers is a Susan B. Anthony List-endorsed pro-life woman who has used her time in office to raise awareness about the sanctity of life. Her firstborn son has Down Syndrome, and he is a “gift from God” she isn't shy of discussing.

…what has recently been uncovered through the videos featuring senior level Planned Parenthood officials admitting to unethical, potentially illegal procedures is really unthinkable to most of us.

Unthinkable not just because of their cold, nonchalant attitude towards…'crunchy' procedures, but because these videos highlight that we’ve allowed the debate on women’s health to get horribly skewed.

Anyone watching these videos can say, ‘The American people must have answers.’ This isn’t women’s health. This is an agenda. It’s an agenda that’s driven by monetary gain, not the best interest of women. Abortion providers should not get to hide behind the foil of healthcare to get away with unspeakable acts.

The practices described in these videos are despicable, and Planned Parenthood must be held accountable. If a hospital were even allegedly involved in any kind of illegal activity, we wouldn’t hesitate for a second to haul them before a committee. Abortion providers should be no different.

Policy makers that are serious about protecting women and families should be invested in getting to the bottom of these statements made by Planned Parenthood. I applaud our committees for launching inquiries into Planned Parenthood practices and procedures. The American people must have answers.

As Secretary of the Interior, McMorris Rodgers will likely not deal directly with abortion policy. She will oversee the management and conservation of most federal land and natural resources, such as the National Park Service. The Department of the Interior “uses sound science to manage and sustain America’s lands, water, wildlife, and energy resources, honors our nation’s responsibilities to tribal nations, and advocates for America’s island communities,” the department's website explains.