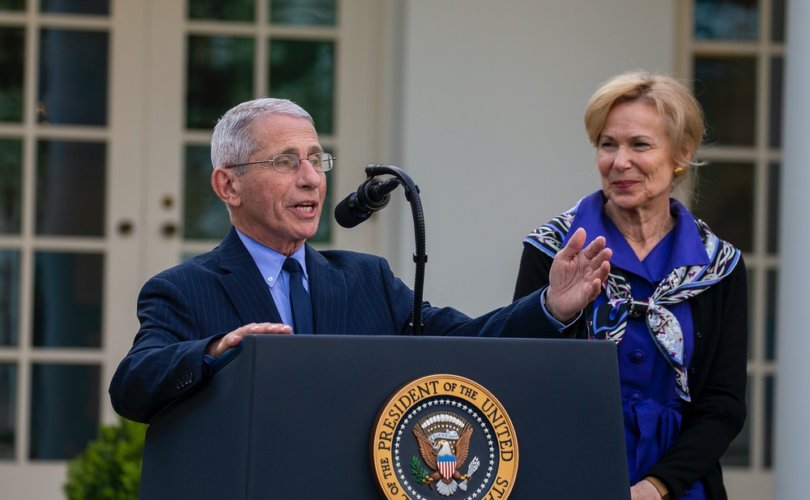 April 21, 2020 (LifeSiteNews) – The Trump administration’s top advisor on the COVID-19 crisis fielded a question about the health risks of casual sexual encounters during a wide-ranging interview last week, offering a strikingly more lax answer than he did on the far-less intimate act of shaking hands.

Dr. Anthony Fauci, director of the National Institute of Allergy and Infectious Diseases, was interviewed last week for the Snapchat program Good Luck America. The interview was released in segments on the social media platform, but the full transcript has been published by Vanity Fair.

At one point, the interviewer asks: “If you’re swiping on a dating app like Tinder, or Bumble, or Grindr, and you match with someone that you think is hot, and you’re just kind of like, ‘Maybe it’s fine if this one stranger comes over.’ What do you say to that person?”

Fauci, who has been largely supportive of imposing drastic changes on Americans’ daily lives in the name of halting COVID-19’s spread, responded that the question was “tough” because it involves “relative risk.”

“If you’re willing to take a risk—and you know, everybody has their own tolerance for risks—you could figure out if you want to meet somebody,” he said. “And it depends on the level of the interaction that you want to have. If you’re looking for a friend, sit in a room and put a mask on, and you know, chat a bit. If you want to go a little bit more intimate, well, then that’s your choice regarding a risk.”

“The one thing you don’t want to do is make sure the person is feeling well,” Fauci continued. “Even though there’s a lot of asymptomatic infections, that’s one of the things that’s really troublesome. That if everybody transmitted would only transmit when they’re sick, that would be much easier. But what we’re seeing, which becomes really problematic, is that there’s a considerable amount of transmission from an asymptomatic person. And we’ve got well-documented now, you know, that situation on the nuclear carrier, the Roosevelt, USS Roosevelt, where hundreds of sailors have gotten infected from people that were not sick. That’s tough.”

Fauci’s apparent comfort with people judging their own health risks of sexual encounters with near-total strangers stands in stark contrast with comments he made earlier this month on a different type of human interaction.

“I don’t think we should ever shake hands ever again, to be honest with you,” he said on the Wall Street Journal podcast. “Not only would it be good to prevent coronavirus disease, it probably would decrease instances of influenza dramatically in this country.”

“As a society, just forget about shaking hands,” he repeated in a Sinclair Broadcast group interview. “We don’t need to shake hands. We’ve got to break that custom. Because as a matter of fact, that is really one of the major ways that you can transmit a respiratory illness.”

Fauci did walk back those comments somewhat in the Snapchat interview, acknowledging that “people will go back to handshaking, but we should probably be a little bit reserved in how we do that unless it’s in a social situation where it’s necessary.” Even so, he also lamented the “problem with human nature” being that “what will happen is that we will get over this. There’ll be new generations. They won’t have a corporate memory of it, and we’ll probably be acting the same way as we act all along.”

During Fauci’s tenure advising President Donald Trump, critics have raised concerns over several of his public comments, from suggesting the possibility of requiring Americans to carry “certificates” documenting their immunity to COVID-19, to implying that the public might have to wait for a vaccine to be developed, tested, and released before regaining their freedoms.