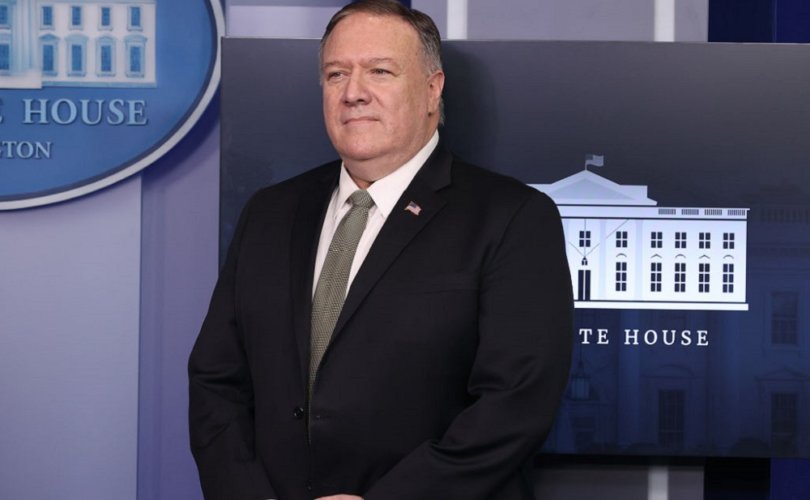 PHILADELPHIA, July 17, 2020 (C-Fam) — “Our rights tradition is under assault,” Secretary of State Mike Pompeo warned solemnly at the unveiling of a report of the U.S. Commission on Unalienable Rights he founded over one year ago.

“The vital 20th century human rights project has come unmoored, and it needs a re-grounding,” Pompeo said Thursday in a rousing speech defending the exceptional character of the founding of America and the U.S. Constitution.

The Commission’s report will provide U.S. diplomats with “advice on human rights grounded in our nation’s founding principles and the principles of the 1948 Universal Declaration of Human Rights,” he explained.

“It’s important for every American, for every American diplomat, to recognize how our founders understood unalienable rights,” Pompeo said. He described being “spellbound” by the founding of America and the U.S. Constitution as a cadet at West Point.

“Without this grounding our efforts to protect and promote human rights is unmoored and, therefore, destined to fail,” he explained.

Pompeo, specifically pointed to how the founders of America professed that “each human being has inherent worth, just by virtue of his or her own humanity,” calling it “a deeply Biblical idea.”

“It is clear — and this report makes it even more so — it is clear that unalienable rights are central to who we are as Americans. But here’s where I come in as Secretary of State. They have to underpin our foreign policy,” he explained.

Pompeo said the report was “very timely,” in light of the debates about the founding of America that have ensued following the Black Lives Matter protesters across the nations during the COVID-19 pandemic.

“Today, the very core of what it means to be an American, indeed the American way of life itself, is under attack. Instead of seeking to improve America, too many leading voices promulgate hatred of our founding principles,” Pompeo decried.

He specifically mentioned “rioters pulling down statues” and the New York Times 1619 project — a revisionist history project that is highly critical of the U.S. founding.

Pompeo announced that the Times had turned down an article by Mary Ann Glendon, the chair of the U.S. Commission on Unalienable Rights, explaining the report of the Commission.

“They want you to believe that Marxist ideology that America is only the oppressors and the oppressed,” he explained.

“This is a dark vision of America’s birth. I reject it. It’s a disturbed reading of history. It is a slander on our great people. Nothing could be further from the truth of our founding and the rights about which this report speaks,” he exclaimed.

“If we truly believe — if we truly believe that rights are unalienable, inviolate, enduring, indeed, universal, just as the founders did, then defending them ought to be the bedrock of our every diplomatic endeavor,” Pompeo said.

He explained this might not mean interventions to “to tackle all human rights violations everywhere and at all times,” but that U.S. diplomats are “forced to grapple with the tough choices about which rights to promote and how to think about this.”

He described the report of the commission as “a framework through which to ask the right questions and a basis for thoughtful, rational debate.”

“I established this commission because America, uniquely among nations, has the capacity to champion human rights and the dignity of every human being made in the image of God, no matter their nation,” Pompeo said.

“But to do so effectively, we must insist on the rightness and the relevance of America’s founding principles. Surely, if America loses them, she loses her soul and our capacity to do good around the world. If we adhere to them, we will replenish that capacity,” he underlined.