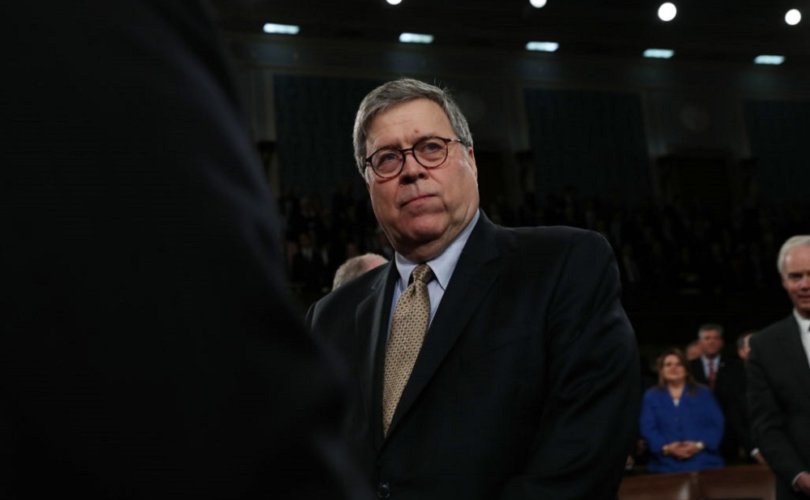 WASHINGTON, D.C., June 22, 2020 (LifeSiteNews) ― The U.S. Justice Department is backing Idaho’s Fairness in Women’s Sports Act against a legal challenge made on behalf of male athletes who call themselves female and want to compete against women.

On Friday, June 19, the Department of Justice filed a statement of interest in Idaho federal court supporting the state’s legislation.

The act has been challenged by the American Civil Liberties Union (ACLU) and Legal Voice, who are representing a consortium including Lindsay Hecox, a boy at Boise State University who wants to compete in athletics against girls.

According to the ACLU, Hecox, 19, “wants to run on the track team so she [sic] can form friendships with other girls [sic].”

“I just want to be one of them,” the broad-shouldered Hecox said in a P.R. video, sporting mascara and curls. “I am one of them.”

According to an article Hecox wrote for Teen Vogue, the athlete began presenting as a woman only after graduating from high school. Hecox ran for his high school track and field team for three years and for the cross-country team for three.

Critics of the Fairness Act say it violates the Equal Protection Clause in the 14th Amendment to the U.S. Constitution. The Justice Department does not agree.

“Under the Constitution, the Equal Protection Clause allows Idaho to recognize the physiological differences between the biological sexes in athletics,” he continued.

“Because of these differences, the Fairness Act’s limiting of certain athletic teams to biological females provides equal protection.”

Barr underscored that women’s sports teams were founded in the first place to ensure that women — i.e., “biological females” — are able to compete in sports. He indicated that limiting participation in women’s sports to females does the same.

“This limitation is based on the same exact interest that allows the creation of sex-specific athletic teams in the first place — namely, the goal of ensuring that biological females have equal athletic opportunities,” Barr said.

“Single-sex athletics is rooted in the reality of biological differences between the sexes and should stay rooted in objective biological fact.”

Republican Governor Brad Little signed Idaho’s Fairness in Women’s Sports Act (Fairness Act) on March 30 this year, and it should go into effect in July 2020. Lawyers for the ACLU and Legal Voice filed a lawsuit in April in an attempt to stop the bill from becoming law.

A statement by the U.S. Department of Justice says that “the Equal Protection Clause of the Constitution does not require States to abandon their efforts to provide biological women with equal opportunity to compete for, and enjoy the life-long benefits that flow from, participation in school athletics in order to accommodate the team preferences of transgender athletes.”

The “legislative findings” and “purpose” in House Bill 500 underscore that there are biological differences between females and males. These differences, especially as they relate “to natural levels of testosterone … have life-long effects, including those more important for success in sport: categorically different strength, speed and endurance.”

The bill also cited research showing that “the benefits that natural testosterone provides to male athletes is not diminished through the use of puberty blockers and cross-sex hormones.”

“A recent study on the impact of such treatments found that even ‘after 12 month of hormonal therapy,’ a man who identifies as a woman and is taking cross-sex hormones ‘had an absolute advantage’ over female athletes and ‘will still likely have performance benefits’ over women,” it states.

It argues that allowing women to compete only against other women furthers women’s equality in the United States.

“Sex-specific teams accomplish this by providing opportunities for female athletes to demonstrate their skill, strength, and athletic abilities while also providing them with opportunities to obtain recognition and accolades, college scholarships, and the numerous other long-term benefits that flow from success in athletic endeavors.”

Idaho is the first state to pass a bill protecting the right of women not to have to compete against males in sports. The Fairness Act does not prohibit females from participating in men’s sports.