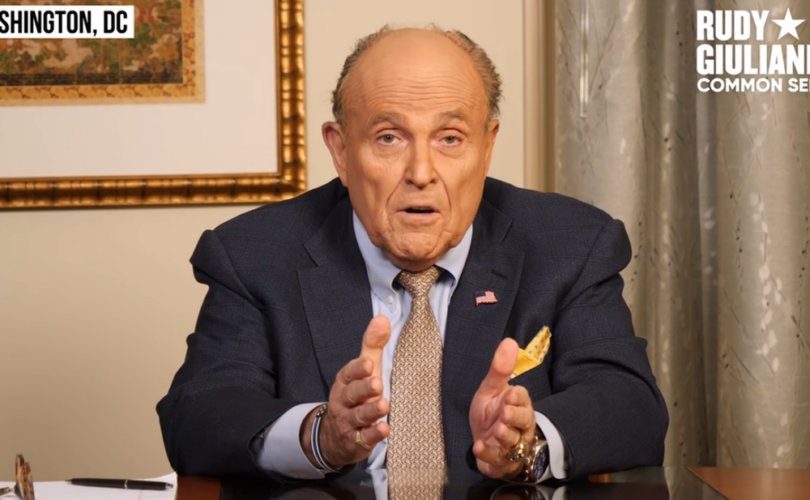 November 19, 2020 (LifeSiteNews) – In a Nov. 18 video posted to YouTube, President Donald Trump’s personal lawyer and former mayor of New York City Rudy Giuliani detailed several anomalies in this year’s election that he says constitutes evidence of widespread voter fraud, including the shady background of the voting machine software used to calculate votes and the problems with huge numbers of mail-in ballots.

Speaking first about the Dominion software employed in many voting districts to calculate votes, Giuliani expressed shock that the actual counting does not take place in the United States. “There have been many surprises, but I was absolutely shocked to learn that many, many, if not all our ballots are calculated outside of the United States of America,” he said.

He then went on to discuss the history of Dominion Voting systems, saying, “When I tell you their real history, I think you’ll be quite shocked that we use them at all for elections.”

He explained that Dominion uses a company called Smartmatic that has locations overseas where the votes are actually counted, noting that the machines used are “extremely vulnerable to hacking.”

He also outlined the origins of Smartmatic, saying it was founded 15 years ago by two Venezuelans with close ties to dictator Hugo Chavez, “and it was founded for the specific purpose of being able to fix elections.”

Urging viewers to check out his claims themselves, he said Smartmatic and its subsidiary Sequoia “were founded for the specific purpose of making sure that Chavez was elected and re-elected, and then also used in Argentina in order to make sure that the election was fixed in the way that Chavez wanted it fixed.”

“This all was exposed during the 2007 election in Chicago in which a company named Sequoia was counting the ballots in Chicago. There was a tremendous amount of confusion, the result of the election was delayed, and there was a great deal of concern with the voting machines,” he continued.

“When they did the investigation, they found this whole history of Smartmatic, that Sequoia was really a front for Smartmatic the way Dominion is a front for Smartmatic.” He also said a lot of Michigan used Dominion’s software in this year’s election without looking at its history “as a company that has been, number one, extremely ineffective, a lot of mistakes, but number two, suspected of directly interfering elections because that was the whole purpose for their origin.”

He then detailed what tipped off the Trump team on the problematic software while explaining what the software does to fix elections, both by subtly switching votes and by warning those in on the game when the opponent is in the lead.

“We found out about it because they apparently made a big mistake,” he said, referring to the 6,000 vote swing in Antrim County, Michigan.

“Usually, according to the evidence that we have so far … the way Smartmatic fixes an election is to very subtly change votes. So there isn’t some big change in any one particular voting place … they use an algorithm in which they spread it out across the city so they can get you a two or three percent difference over your opponent,” he said, pointing out that this technique was used in both Venezuela and Argentina.

“We’re using a system that originates from a dictatorship, maybe one of the worst in the world, as the core of our vote calculation, and a company whose expertise is subtle changes in votes so they’re not noticed, so there are not too many anomalies in the vote return,” he continued.

Guiliani then pointed out that the software does not always operate perfectly, and so rather than making subtle changes to the vote count in Antrim County, one machine switched 6,000 votes. A smaller difference would have been hard to catch, but this one led them to investigate more widely.

He admitted that they would be unlikely to find large amounts of vote switching due to the software because the companies make the switches “in a way that’s very, very careful.”

He then said that another way the software works is to “warn you when you’re falling too far behind when the count is going on.” As a result, it becomes possible to stop the count. He then pointed out the large leading margin Trump had on election night in many crucial election districts that would normally have been cause for the media to call those states for the incumbent.

This led him to discuss other sources of fraud made possible in part by the warning feature of the Dominion software, namely, the large number of mail-in ballots that were delivered in the middle of the night and the lack of scrutiny by Republican inspectors.

He considers that an inspection of the many absentee ballots “that were not inspected at all by Republicans” could have overturned the result. However, it is now impossible to verify the legitimacy of many mail-in ballots because when these ballots are separated from their envelopes, it is not possible to verify them properly. Consequently, the recounts that include these ballots become “meaningless.”

Exclaiming that it is “outrageous” that Republicans had no chance to verify the “hundreds of thousands, and now it goes over a million, absentee ballots” that “were counted by just one side,” he said, “In many of these states, that number (of ballots) far exceeds Biden’s small margin of victory. Those ballots should be declared null and void. They should be taken out of the count. And if that happens, and I believe it will, you’re going to see at least three or four of the states, if not all of them, flip because the number of illegal ballots far exceeds the small lead that Biden has.”

Giuliani expressed confidence that ongoing statistical analysis will uncover more fraud carried out by Dominion. He noted that in some of Michigan’s heavily Democrat districts, statistical analysis has found that more votes were cast than voters. “There’s even one where 300 percent of the people in the district voted. What does that mean? That means they’re not real people … it means they’re either from some other district, or they’re completely phony ballots,” he said.

“When you look at Michigan, that number alone can wipe out all of the Biden lead and turn it around to a Trump victory.”

He also complained that in Democrat-controlled cities, mail ballots were added to the count without any Republican monitors checking them, which violates the constitutional right to due process and equal protection. “Why would you do that?” he asked. “Why would you just uniformly exclude Republicans and why would you do it in every one of those? Like every single one of them had that idea by themselves?”

“That had to come from some central source,” he alleged.

In summing up his case, Giuliani said that “if you put together those two things … all the ballots that were put in secretly without Republican inspectors … those ballots violate both the due process and the equal protection clause of the United States Constitution, the numbers are much greater than the margin and they have to be thrown out.”

Further, referring back to the way Dominion calculates votes overseas, he insisted that “What has to emerge from it is never ever again should our votes be counted outside the United States of America … to make sure there aren’t formulas that used to switch the vote by two or three percent or formulas that are used to warn you if you should put in illegal ballots.”

Saying they have much more evidence that he is leaving unsaid whether due to time constraints or to the sensitive nature of it, Giuliani emphasized that in “every one of the states where they utilized a crooked Democrat city to carry out the voter fraud, there are more than enough fraudulent ballots that have now been discovered to overturn the vote in that crooked city and to change the result in the state, based on legitimate votes, from Biden to Trump.”