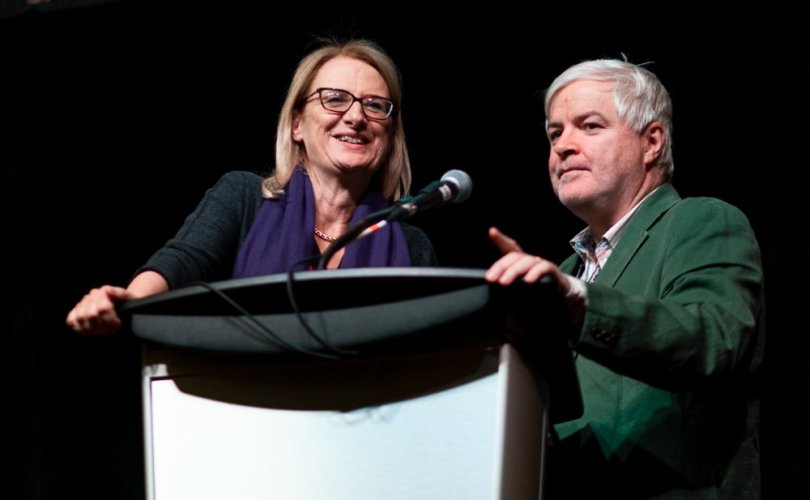 Phelim McAleer and Ann McElhinney, producers of Gosnell, speak at the Rose Dinner at the Canadian March for Life in Ottawa on May 9, 2019.Courtesy of Campaign Life Coalition

OTTAWA, May 9, 2019 (LifeSiteNews) — The producers of Gosnell: The Trial of America’s Biggest Serial Killer told Canada’s March for Life they made the movie to capture on film an abortionist’s sworn testimony of what really happens in an abortion.

“We had to tell this story,” Ann McElhinney told the crowd of some 5,000 gathered on Parliament Hill on a cold, windy Thursday for the 22nd annual March for Life, which marked 50 years of legal abortion in Canada.

There have been 4 million babies aborted in Canada since abortion was legalized in 1969, and there are now roughly 100,000 abortions every year.

McElhinney’s husband Phelim McAleer described how he stumbled on the horrifying tale of Kermit Gosnell when, compelled by a journalist’s curiosity and on a day off from promoting his pro-fracking documentary FrackNation, he attended a trial in Philadelphia about a “crazy doctor.”

Abortionist Gosnell had been charged with multiple counts of homicide for snipping the spinal cords of babies who survived abortion — something he reportedly did hundreds of times in 30 years at his filthy, blood-spattered abortion facility, while officials and media looked the other way.

Gosnell, now 78, was ultimately convicted of three counts of homicide for the deaths of three babies, and one of involuntary manslaughter for the death of mother Karnamaya Mongar. He is now serving a life sentence with no possibility of parole.

McAleer walked into the trial as a witness was giving evidence, and there were massive photographs of Gosnell’s victims on the courtroom walls, he told the crowd.

“I’d never heard evidence like it in my life,” he said. “I’d never seen such photographs of that in my life. But the most shocking thing was behind me, was the row after row of empty press benches.”

He returned to California convinced he had to take this on as his next project, but McElhinney and their business partner, Magdalena Segieda, wanted nothing to do with abortion.

That changed when they read the transcripts of testimonies from the day McAleer attended the trial.

Those transcripts are what’s “amazing about this story,” McElhinney told the crowd.

Feisullin testified how babies are aborted up to 23 weeks and six days gestation, which, according to AbortionDocs.com, is the legal limit for abortion in Pennsylvania.

“They asked her on the stand, what happens then? Do you pull out an arm and a leg? Yeah, that’s what you do. They asked her that. She’s not a pro-life activist, believe me, and that’s how she described it: you suction out the brains, that’s how the head comes out,” the filmmaker said, her voice intense with emotion.

“It’s the only reason we made the movie, was that that testimony would be in a movie and people would have to watch it, and anyone that watched it and said it was propaganda is a liar,” McElhinney said.

“It’s a lie, because the truth is ugly and barbaric.”

Feisullin also testified under oath that when a baby survives abortion, “we keep it comfortable, we apply comfort care, eventually it will pass,” she said.

A policeman who questioned an abortionist who did not take the stand in connection with the Gosnell case repeatedly asked her what happened to babies born alive after an abortion.

The abortionist insisted this never happened, but when the policeman “kept pushing, she started crying. She said, ‘I never thought of it,’ and you know more than she does, because it happens,” McElhinney said.

“And we all know it happens now because of Governor [Ralph] Northam in West Virginia [sic: Northam is the governor of Virginia –ed.], who told us what happens when a baby is born alive.”

Northam was defending the recent New York bill that allows abortion up until birth.

“This why the media don’t cover abortion,” McElhinney said.

“Because when people find out, decent people don’t like it. Never let them shut you up.”

As well as addressing the rally before Thursday’s March for Life, the two producers of Gosnell are speakers at the Rose banquet.

Other speakers at the March include Abby Johnson, author of Unplanned, Steve Karlen of 40 Days for Life, Cardinal Thomas Collins of Toronto, Angelina Steenstra of Silent No More, M.P. David Anderson, and Shalyn McGuin of Save the 1.

The March for Life continues tomorrow with an all-day youth conference.