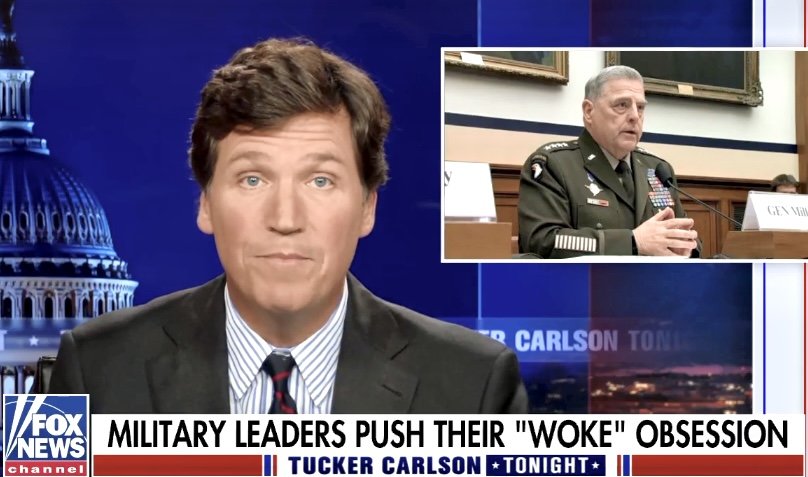 WASHINGTON, D.C., June 28, 2021 (LifeSiteNews) – Fox News prime-time host Tucker Carlson excoriated Mark Milley, Chairman of the Joint Chiefs of Staff for the U.S. Department of Defense, in a recent monologue over recent testimony during which the nation’s highest-ranking military officer took offense to the suggestion that social-justice ideology had infected America’s armed forces while simultaneously touting the need to understand so-called “white rage” as a present-day social ill.

“I do think it's important, actually, for those of us in uniform to be open-minded and be widely read, and the United States Military Academy is a university, and it is important that we train and we understand,” Milley said last week in testimony before the House Armed Services Committee. “And I want to understand white rage, and I'm white, and I want to understand it. So, what is it that caused thousands of people to assault this building and try to overturn the Constitution of the United States of America? What caused that? I want to find that out.”

“I've read Mao Zedong. I've read Karl Marx. I've read Lenin. That doesn't make me a communist,” added Milley. “So, what is wrong with understanding, having some situational understanding about the country for which we are here to defend? And I personally find it offensive that we are accusing the United States military, our general officers, our commissioned and our noncommissioned officers, of being quote, ‘woke.’”

“Hard to believe that man wears a uniform. He's that unimpressive,” Carlson remarked. “He is not just a pig, he is stupid.”

The “question that we should be meditating on day in and day out,” Carlson went on, “is how do we get out of this vortex, this cycle, before it's too late? How do we save the country before we become Rwanda? What should we be teaching our children so that they can live in a country that you want to live in? A country full of many different kinds of people, many different, but who actually like each other, who are happy to work together, who are united ultimately by the core fact, which is they are all Americans?”

The steady rise of political correctness within the military, which has persisted since the Clinton years despite the presidencies of Trump and former President George W. Bush, has — if anything — been intensified by President Joe Biden, who quickly moved to open the military to recruits suffering from gender dysphoria.

Upon taking office, Biden Defense Secretary Lloyd Austin ordered a force-wide stand down “requiring all units to discuss the threat of extremism within 60 days,” as the first step in “a concerted effort to better educate ourselves and our people about the scope of this problem and to develop sustainable ways to eliminate the corrosive effects that extremist ideology and conduct have on the workforce.”

As part of this review, the Pentagon produced training materials identifying pro-life Americans and government critics as potential “extremists” and is soliciting input from far-left groups such as the American Civil Liberties Union (ACLU), Southern Poverty Law Center (SPLC). Lt. Col. Matthew Lohmeier, who was recently removed from command of the 11th Space Warning Squadron at Buckley Air Force Base over his criticism of “woke” ideology in the military, says that videos presenting Americans and whites as “evil” were “sent out to every base (and) service member,” who “were asked to watch (them) in preparation for” the extremism stand down.