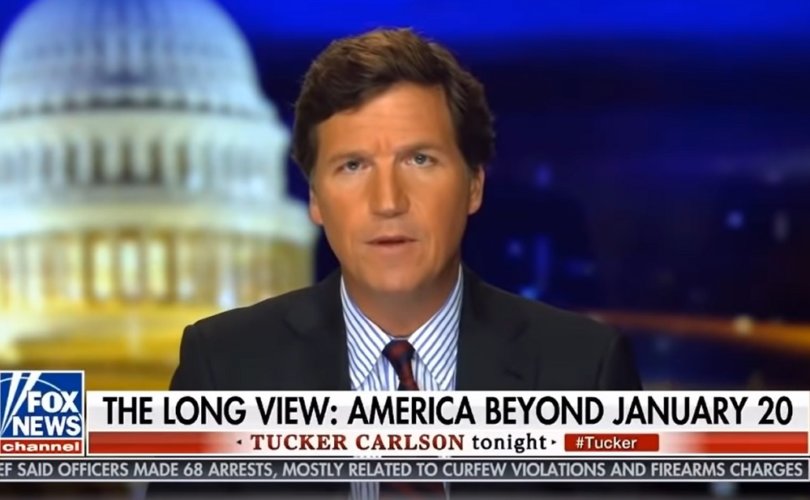 January 9, 2021 (LifeSiteNews) — Democrats, social media giants, and CEOs have seized upon Wednesday’s Washington, D.C. protest as a blanket excuse to crack down on the freedoms of anyone who supports President Donald Trump.

“The Trump protest at the Capitol yesterday is already being used as a pretext for an unprecedented crackdown on civil liberties. Just in the last several hours we have heard people in positions of power and authority demand that those who support Donald Trump should no longer be allowed to publish books or use the internet or fly on airplanes.”

“Driving cars, holding jobs, staying in hotels — those will certainly be next, and we’re barely exaggerating. In fact, we’re predicting it,” Tucker Carlson said during his show Thursday evening.

“To justify mind-bending, terrifyingly un-American demands like these, they are as usual relying on lies and hysteria,” Carlson continued.

A leading House Democrat, the Homeland Security chairman, Rep. Bennie Thompson, has called for those who entered the Capitol building on Wednesday to be placed on the federal No-Fly list by the TSA and the FBI, citing a “heinous domestic terrorist attack on the U.S. Capitol.”

His characterization of the events echoes that of Joe Biden, who described Trump-supporters as “domestic terrorists” in a tweet yesterday.

Sara Nelson, president of the Association of Flight Attendants, likewise called for the banning of certain Trump-supporters from flying, although she was not clear in specifying who should be banned beyond those who “participated” in what she described as an “insurrection at the Capitol.”

“Some of the people who traveled in our planes yesterday participated in the insurrection at the Capitol today. Their violent and seditious actions at the Capitol today create further concern about their departure from the DC area,” she wrote in a statement on Wednesday.

“Acts against our democracy, our government and the freedom we claim as Americans must disqualify these individuals from the freedom of flight,” said Nelson, who together with the union supported Joe Biden in the 2020 election.

— Article continues below Petition —
PETITION: Dump Twitter and Big Tech for threatening our democracy and freedom of speech!
Show Petition Text
15585 have signed the petition.
Let's get to 17500!
Thank you for signing this petition!
Add your signature:
Show Petition Text

Numerous Trump-supporters have been fired after their employers learned through social media that they had breached the Capitol, according to Business Insider. One woman was fired after posting a pictures of pro-Trump protesters and a glass of champagne with the caption, “After storming the capital [sic] a good glass of champagne is needed!”

Wednesday’s events are also being used as an excuse to remove posts and videos from major social media platforms. In some cases, there is no apparent reason other than the questioning of the legitimacy of the election, or even the expression of dissatisfaction with the Democratic party.

YouTube has just announced that, in response to Wednesday’s events at the Capitol, it will crack down on claims of voter fraud by blocking users from YouTube for a week without a first-strike warning, which was its previous policy.

“Due to the disturbing events that transpired yesterday, and given that the election results have now been certified, starting today *any* channels posting new videos with false claims in violation of our policies will now receive a strike,” YouTube tweeted yesterday.

YouTube has already admitted to censoring “thousands of videos” claiming that fraud affected the 2020 election, and was quoted by USA Today as stating, “Over the last month, we have removed thousands of videos spreading misinformation and claiming widespread voter fraud changed the outcome of the 2020 election, including several videos President Trump posted to his channel.”

Brandon Straka, openly homosexual founder of the #WalkAway campaign movement, which “encourages and supports those on the Left to walk away from the divisive tenets” of today’s Democratic Party, shared on Twitter today that Facebook had banned his #WalkAway campaign page, which Straka noted contained “hundreds of thousands of testimonial videos” of people explaining why they left the Democratic Party.

Facebook and Instagram banned Donald Trump from their platforms indefinitely. Twitter announced Friday night it is banning Trump — the leader of the free world — from its platform permanently. The Chinese communist government is still allowed to use Twitter, as is Iran’s ayatollah.

Reddit has also banned a Donald Trump discussion forum “after pro-Trump supporters were found to have organized online,” reported Axios. The forum was banned “due to a violation of Reddit’s rules against inciting violence,” according to Reddit.

“We have also taken action to ban the community r/donaldtrump given repeated policy violations in recent days regarding the violence at the US Capitol,” a Reddit spokesperson said.

.@HawleyMO responds to @JoeBiden and does not hold back pic.twitter.com/IjwcUyRDuC

Untangling the accounts of what happened at the Capitol on Jan. 6, and some perspective

LifeSite is asking for any tips, videos of Capitol protests