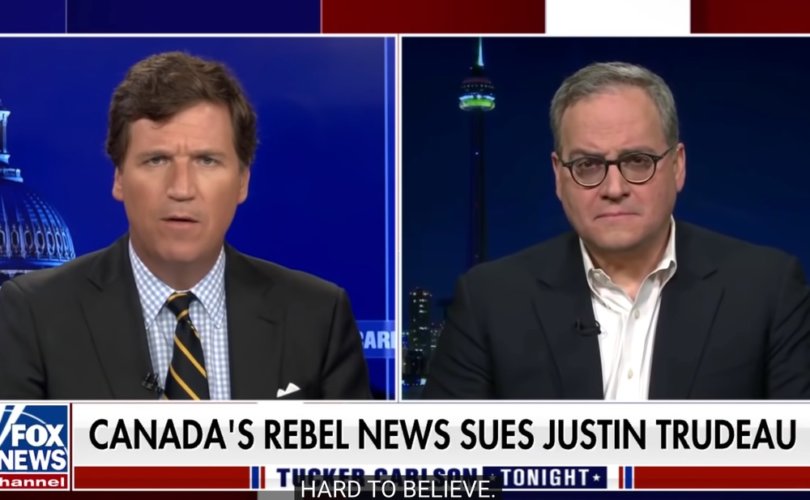 “Well, it’s not yet illegal to do journalism without that license, it’s a government license called the qualified Canadian journalism organization [QCJO] license,” Levant told Carlson, referring to a letter Rebel News received from Canada Revenue Agency informing them that after a review of Rebel’s content, they would not be given a QCJO license as they were not considered a “real” news outlet by the government.

“[The CRA] spent one year reviewing Rebel News, looking through more than one hundred of our stories, a panel of five people in secret – we don’t even know what they said or did … and they claimed only one percent of our stories are news, so we don’t get the license,” Levant told Carlson, adding that while the Rebel News is “not outlawed,” they will be barred from official government events and will not receive the income tax credit given to the state-approved outlets.

The attack on independent media does not stop with being prevented from covering official government events, Levant continued, noting that Trudeau is also seeking to push through legislation that would “compel Facebook and Google” to “downrank non-licensed journalists” and “boost his trusted, friendly journalists.”

As referenced by Levant, Bill C-18, which is currently being debated in the House of Commons and was proposed by Liberal Minister of Canadian Heritage Pablo Rodriguez, seeks to involve Big Tech platforms in the regulation of internet content in Canada.

According to the bill’s text, news outlets to which the government grants a “qualified Canadian journalism organization” license will be given favorable “ranking” on Big Tech platforms, and will also be given “fair compensation” when their content is shared through the giant “intermediary” social platforms.

Referring to the large government subsidies given to mainstream journalists, Levant informed Carlson that with Bill C-18, not only are these outlets already “dependent on Trudeau,” but they may soon also be dependent on “Google and Facebook” for a “huge chunk of their revenues.”

Getting into the specifics of the collusion between government and media, Levant mentioned the 61 million dollars the Trudeau government paid out to over 1,000 media companies prior to his election last year under the label of “emergency relief,” stating that “since [the media] is in on it, they can’t very well report it, and they certainly can’t very well object to it.”

As reported by LifeSiteNews, Bill C-18 is only one of the Trudeau government’s latest attempts to expand censorship of news media through the regulation of the internet.

Trudeau’s Heritage Minister has also proposed the controversial Bill C-11, which seeks to use the Canadian Radio-television and Telecommunication Commission (CRTC) to monitor and regulate online content.

Dr. Michael Geist, a law professor at the University of Ottawa and Canada Research Chair in Internet and E-commerce Law, commented that Bill C-11 will allow for CRTC to have a “virtually limitless reach” in what is deemed acceptable or not for programming.

Conservative MP and lawyer Leslyn Lewis has also decried Bill C-11, warning Canadians that such legislation could even be used to suppress opposing political views, particularly considering Trudeau’s willingness to levy malicious accusations towards unvaccinated Canadians and those who have protested his government, most notably his treatment of the anti-COVID mandate “Freedom Convoy” demonstrators earlier this year.

“Neither the Liberals nor any government, regardless of your political stripe, can be trusted to be neutral referees of what is preferred speech and preferred content,” Lewis said during a Bill C-11 debate in the House of Commons.

“[Trudeau’s refusal to] listen to legitimate concerns of fellow Canadians, even when those who trucked from clear across the country came to just have a conversation,” shows he cannot be trusted when it comes to Bill C-11, stated Lewis.

Lewis continued by reminding people that instead of engaging in conservation with political opponents, Trudeau instead labeled such “people as racist, misogynist, [and] anti-science people with unacceptable views” in “order to silence and cancel their voices.”

In one instance, Trudeau even questioned whether or not Canadian society should “tolerate” those who have decided against receiving an experimental COVID-19 injection.

“A prime minister who can hardly tolerate differences of opinions within his own cabinet and party cannot be trusted to respect the different opinions and preferences of Canadians,” Lewis said.