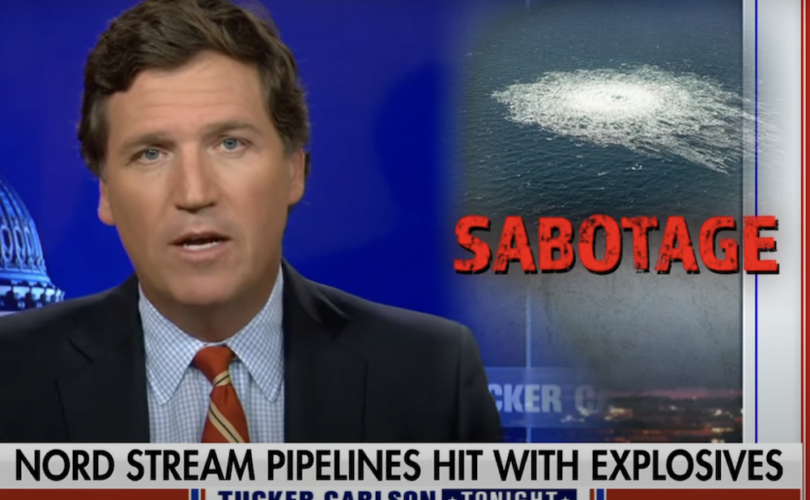 (LifeSiteNews) – Tucker Carlson strongly insinuated on his show on Tuesday that the Biden administration may be responsible for blowing up the Nord Stream pipeline in the Baltic Sea and that this would lead to war between the U.S. and Russia.

“If they did this, it would be one of the craziest, most destructive things any American administration has ever done, but it would also be totally consistent with what they do,” and this would mean that “the United States is directly at war with the largest nuclear power in the world,” according to Carlson.

Detonations in the Baltic Sea on Monday, September 27, caused massive damage to the two major gas pipelines between Russia and Germany called Nord Stream 1 and Nord Stream 2. Most experts believe that this was a deliberate, targeted attack on the pipelines.

He ridiculed the mainstream media for speculating that Russian President Vladimir Putin is responsible for the attack and said “Vladimir Putin may be evil […] but is he stupid? Probably isn’t stupid.”

Elaborating on his point that Russia would be an unlikely perpetrator, Carlson said that “If you are Vladimir Putin, you would have to be a suicidal moron to blow up your own energy pipelines,” and “Natural gas pipelines are the main source of your power and your wealth and most critically your leverage over other countries.”

Carlson went on to say that while blowing up Nord Stream does not help Vladimir Putin, other countries would have considered destroying the pipelines, citing President Joe Biden’s statements from this February.

RELATED: US gov’t suspected of sabotaging major European gas pipeline after Biden threatened to ‘end’ it

Pres. Biden: "If Russia invades…then there will be no longer a Nord Stream 2. We will bring an end to it."

Reporter: "But how will you do that, exactly, since…the project is in Germany's control?"

Biden: "I promise you, we will be able to do that." https://t.co/uruQ4F4zM9 pic.twitter.com/4ksDaaU0YC

“If Russia invades [Ukraine] […] then there will be no longer a Nord Stream 2. We will bring an end to it,” Biden said on camera in February. A reporter then asked the president how he would do that since the pipeline is under Germany’s control. Biden responded by saying: “I promise you we’ll be able to do it.”

“And yet those watching, including us, didn’t take Biden seriously,” Carlson commented. “This is the president who declared climate change the most pressing emergency in the history of the world. […] Would that guy blow up a methane pipeline in the middle of the Baltic Sea? […] That would be an unimaginably reckless act. That would be the kind of thing that you would do if you wanted to start a nuclear war.”

“And yet,” the Fox News host continued, “in retrospect, it’s obvious they were thinking about this,” since U.S. Under Secretary of State for Political Affairs Victoria Nuland said “pretty much the same thing.” Nuland also “helped to engineer the coup that overthrew the Ukrainian government some years ago,” according to Carlson.

Nuland made her remarks about Nord Stream 2 in January 2022: “If Russia invades Ukraine, one way or another, Nord Stream 2 will not move forward.”

RELATED: ‘Monumental provocation’: How US and international policy-makers deliberately baited Putin to war

Carlson called Nuland’s statements “chilling” when looking back at them now.

Even if “we don’t know for sure” that the U.S. government is responsible for this act, “we can tell you that close allies of the Biden White House believe they certainly did do it,” the Fox News host also said.

He referred to a now-deleted tweet posted by Radek Sikorski, a former Polish Defense Minister and current member of the European Parliament. Sikorski had posted a picture of the water surface above the gas leaks writing, “Thank you, USA.”

The Polish MEP added in another since deleted tweet, “As we say in Polish, a small thing, but so much joy. #Nordstream,” expressing his delight over the destruction of the pipelines. In addition, he retweeted Biden’s comments from this February about bringing an end to Nord Stream 2, later deleting the post.

“He [Sikorski] is chairman of the EU-US delegation in the European Parliament, he’s connected. He is also the husband of the regime’s stenographer, Anne Applebaum of the Atlantic magazine. He is so close to Joe Biden that he got a picture of the two of them in his Twitter profile,” Carlson asserted.

The Fox News host continued by stating that the new “Baltic Pipe” gas pipeline between Denmark and Poland was inaugurated on the same day that the Nord Stream incident occurred. Polish President Andrzej Duda said that the project would end the country’s dependence on Russian gas.

“It is likely to do very well since now it has less competition. Making sense?” Carlson asked the audience regarding the Baltic Pipe.

“If they did this, it would be one of the craziest, most destructive things any American administration has ever done, but it would also be totally consistent with what they do,” Carlson stated. “What do they do? They destroy, these people build nothing […] instead they destroy, they desecrate, from historic statues, to the Constitution, to energy infrastructure.”

Moreover, Carlson cited a $35 million spending bill advanced in the Senate the night of the incident which is meant “to prepare for and respond to potential nuclear and radiological incidents in Ukraine,” a further sign that the U.S. government may expect an escalation following the attack on the pipelines, according to the Fox News host.

Carlson explained that, if the U.S. were in fact responsible for the attack on the Nord Stream pipelines, that would mean direct war between the U.S. and Russia:

Every action has a reaction, equal and opposite. Blow up the Nord Stream pipelines? Okay, we’ve entered a new phase. One in which the United States is directly at war with the largest nuclear power in the world [Russia].

Carlson stated in his segment that “one of the great environmental catastrophes of our time is unfolding tonight off the coast of Denmark. […] Nord Stream 1 and 2 are pouring millions of cubic meters of natural gas into the Baltic Sea.”

The Fox News anchor went on to talk about the possible impacts on the environment:

You can only guess how many marine mammals are being killed right now. Countless! But the lasting damage may be to the atmosphere. Natural gas is comprised of up to 90% methane. […] So, if you are worried about climate change, what just happened to the Nord Stream pipelines is as close to the apocalypse as we have ever come.

At the same time, White House press secretary Karine Jean-Pierre claimed that the incident at the pipelines actually provides an opportunity for “moving to clean energy economy.” The Fox News anchor reacted to this by blasting the Biden administration for its blatant hypocrisy:

Oh, “moving to clean energy” say the people who very well may be responsible for letting methane into the Baltic Sea and into the atmosphere at a scale that most people can’t imagine. People lecturing you about your SUV may have blown up a natural gas pipeline and created one of the great catastrophes of our time.

Carlson closed the segment by drawing a grim picture of the possible fallout of the pipeline attacks:

If we blow up the Nord Stream pipeline, why wouldn’t Russia sever undersea internet cables? What would happen if banks in London could not communicate with banks in New York for one day […] What would the economic effect of that be? […] We could have an actual collapse. We could wind up very quickly in third-world conditions. Those are the stakes. Have the people behind this, the geniuses, like Victoria Nuland considered the effects? Maybe they have. Maybe that was the point.