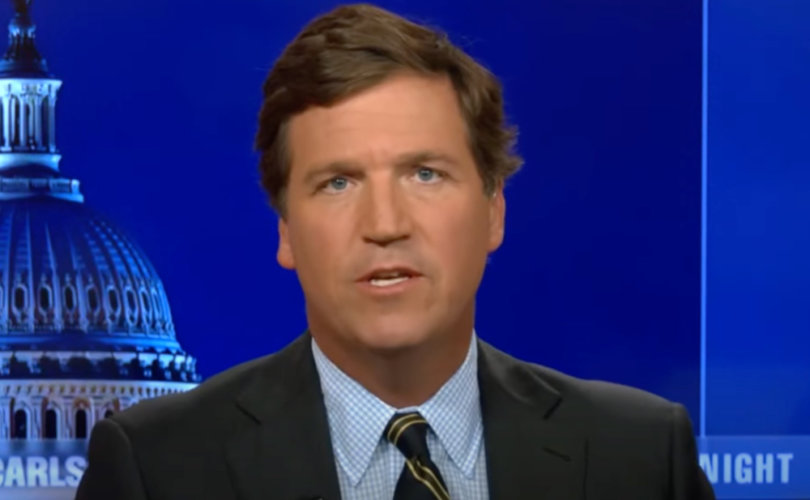 WASHINGTON, D.C (LifeSiteNews) The Biden administration’s maligning of conservatives as “semi-fascists” and “threats” to “our democracy” is meant to “suppress political dissent,” according to Fox News host Tucker Carlson.

Carlson analyzed recent actions by the Department of Justice and comments by President Joe Biden and Vice President Kamala Harris on his show September 12.

“What we’re seeing now is the beginning or the death knell of an extreme MAGA philosophy. It’s not just Trump, it’s the entire philosophy that underpins the — I’m going to say something, it’s like semi-fascism,” Biden said in late August. He and his team has also used the term “MAGA Republican” or “ultra-MAGA” to describe pro-lifers, supporters of Biblical marriage and fiscal conservatives, whom his administration has dubbed an “extremist threat to our democracy.”

“The Biden administration’s message [on the anniversary of 9/11]… was that anyone who disapproves of Joe Biden’s performance is a terrorist,” Carlson said. Vice President Harris agreed with NBC’s Chuck Todd that the threat from within the country, including critics of the integrity of the 2020 election, is worse than what the country faced on September 11, 2001.

President Biden has regularly pushed this “terrifying” theme, Carlson said on his show, with reference to the September 1 “enemies of the state” speech in Philadelphia by the president.

He warned about the “war” Biden is launching against Republicans.

The next day after the speech, Carlson noted, the FBI came to visit a Trump supporter at her home after law enforcement received an “anonymous tip” that the woman, Lisa Gallagher, was at the U.S. Capitol on January 6, 2021. She was not there.

“Imagine armed FBI agents showing at your house because you supported Trump on Facebook,” Carlson said. “And of course the FBI already knew Lisa Gallagher was not there,” because of their facial recognition technology, Carlson said.

“This is Soviet,” Carlson said, of the use of the FBI to intimidate Trump supporters. He detailed other examples of other conservatives being harassed by law enforcement.

Carlson reported that his team had “obtained a subpoena” from the Department of Justice that asked the recipients for any communications about then-Vice President Mike Pence being able to reject the electors of states, as some Trump allies wanted him to do on January 6, 2021.

The request is “unlawful” and “without precedent,” Carlson said.

“So what is this about?” Carlson asked.

“The point of this is to suppress political dissent. To hobble an entire political party, and to keep any of these people from ever participating in American politics again,” Carlson said.

“Merrick Garland’s DOJ plans to disenfranchise, if not jail,” people who raised concerns about the 2020 election or peacefully protested at the U.S. Capitol, Carlson alleged.

The continued targeting of political opponents poses a “threat to the American system,” Carlson said. “This kind of behavior, politicized federal law enforcement, is a threat to democracy. It’s a threat to the system we live under.”

“We cannot allow this,” Carlson concluded.