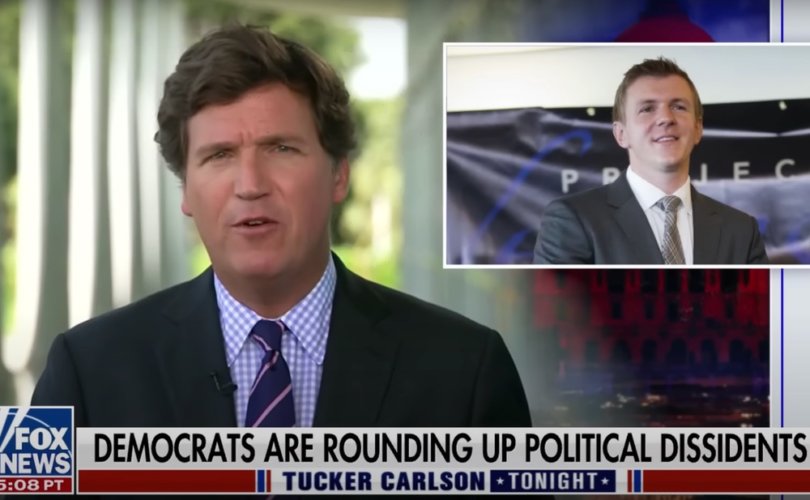 (LifeSiteNews) — Arguing the Biden administration is engaging in a political persecution against conservatives, prominent Fox News personality Tucker Carlson last week named a bevy of “political dissidents” who he said have been targeted by the federal officials in the past 18 months.

Speaking from the presidential palace in Brazil, where Carlson had met with Brazilian President Jair Bolsonaro, the popular conservative talk-show host argued that the Biden administration is engaged in the “criminalizing of American politics” in a manner reminiscent of Latin American countries where people are “routinely” imprisoned “when they lose elections.”

Calling the Democrat-led January 6 Committee a “farce” and a “show trial,” Carlson argued that the “absurdity” and “hollowness” of the committee “sends the message, ‘We run the justice system now. You are powerless.’”

“And that is the same message the Biden administration has sent to America for the last year-and-a-half, with the help of Merrick Garland,” he said.

“Here’s a list of the things they’ve done, because no one else has assembled it,” Carlson said in the video, which was also made available as a transcript.

Carlson began by noting that on January 27, 2021, right-wing social-media influencer Douglass Mackey (known online as Ricky Vaughn) was arrested by the Biden administration’s Department of Justice for allegedly using social media to “Deprive Individuals of Their Right to Vote” in 2016.

On February 3, Alan Hostetter and Russell Taylor, who organized a pro-Trump rally just before the January 6 Capitol riot, had their homes raided by the FBI. Carlson said the men had “organized a lawful political rally on January 6. They even had a permit for the rally.” Hostetter and Taylor have since been hit with federal charges, including conspiracy and obstructing an official proceeding for their alleged participation in the Capitol riot.

RELATED: Facebook to ban those charged in Jan. 6 Capitol riot and ‘fact-check’ claims the riot was staged

“That didn’t used to be allowed,” Carlson said. “You can’t seize the records of someone’s attorney. Those are confidential lawyer-client communications.”

As of this date, Giuliani has not been charged with any crimes related to alleged illegal schemes in Ukraine.

Carlson also noted that on June 24, 2021, Giuliani-associate George Dickson’s home was raided by federal officials. Dickson had been working on a documentary about Joe Biden and his son Hunter’s business dealings in Ukraine at the time of the search.

The FBI told the media at the time they could not “comment further due to the ongoing nature of the investigation.”

On January 19, 2021, Infowars journalist Owen Shroyer was arrested and charged for his alleged involvement in and encouragement of the January 6 Capitol riots.

Then, on November 6, 2021, the FBI raided the homes of several Project Veritas journalists, including founder James O’Keefe.

“What did they do wrong? Drug trafficking? Human trafficking? No,” Carlson said. “They reported on a diary written by Joe Biden’s daughter, Ashley, and in that diary, Biden’s daughter writes, reveals to the rest of us, that Joe Biden showered with her in a way that she described as inappropriate and that she blames for making her sexually compulsive in later life. For having access to that information, the FBI raided Project Veritas.”

O’Keefe said he had long since turned the diary over to law enforcement at the time of the raid.

Days later, on November 15, the Biden Justice Department arrested former Trump adviser Steve Bannon for refusing to comply with a congressional subpoena to testify before the January 6 Committee.

“Peters called the raid evidence of ‘a level of weaponization of the Justice Department we haven’t seen since the McCarthy era,’” Carlson said in his monologue.

On June 3, 2022, former Trump staffer Peter Navarro was arrested at Washington National Airport after refusing to appear before the January 6 Committee.

Kelley later told LifeSiteNews the Biden administration “continue[s] to come after anyone that they disagree with,” arguing the administration has moved to “weaponize the FBI” against the people and “silence conservatives.”

On June 22, federal agents stopped and searched former Trump attorney John Eastman as he was exiting a restaurant and seized his cell phone. According to a court filing submitted by Eastman requesting the return of his property, the agents failed to show the former Trump lawyer a warrant before frisking him and taking his device.

A day later, on June 23, former Trump DOJ official Jeff Clark also had his home searched by the FBI as the January 6 Committee ramped up its investigation of those associated with Trump.

Concluding his monologue, Carlson warned that “abuses of power escalate.”

“Every election of your lifetime has been contested, every single one,” he said, suggesting a double standard. “There’s not an election a Republican wins in which Democrats don’t say, ‘Yes, the voting machines were rigged.’”

According to Carlson, the crime of every person he listed was simply “making Joe Biden mad.”

“Someone needs to stop this before it gets even crazier,” he said.