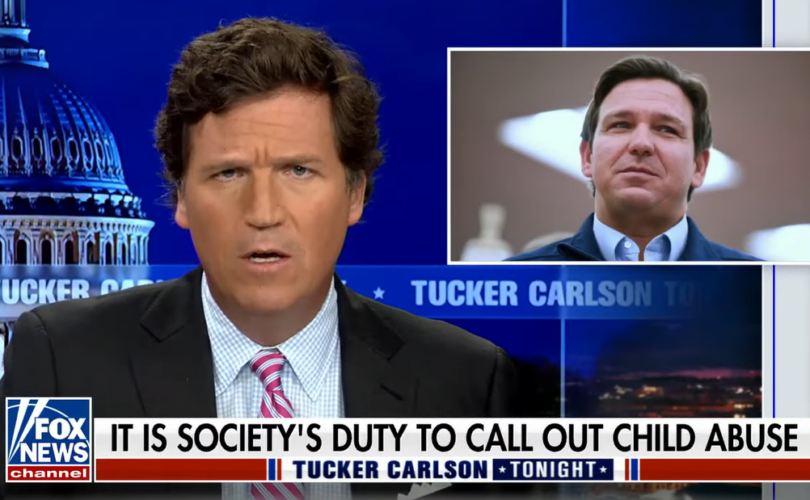 Fox News host Tucker Carlson pointed out MSNBC's attempts to suggest that because Florida Gov. Ron DeSantis signed a bill banning teachers from sexualizing kindergartners that he's responsible for this week’s mass shooting at a gay bar in Colorado.YouTube

“Balenciaga rolled out a new ad campaign on Instagram and the selling point of the ads was sex with children. One photograph showed a very young girl lying face down on a couch with candles, empty wine glasses and a dog collar on a coffee table in front of her,” Carlson said. “Another picture showed the same girl, a toddler, holding a teddy bear dressed in sexual bondage gear, including a leather harness.”

Another “picture showed pages from a Supreme Court opinion that struck down a law designed to fight child pornography. Whoever staged the photo shoot made certain to include a portion of that opinion that use the word “sex” or “sexual” four times and of course, that was not an accident. Balenciaga wanted you to notice,” the Fox News host said.

“No healthy society can tolerate that, and in fact, none ever have,” he said. “But apparently it’s not unacceptable anymore.”

Carlson cited several examples of NBC News’ on-air personalities and guest commentators endeavoring to redefine the instinct of healthy adults to protect kids from sexualization and mutilating trans-medical procedures as a crime.

In one MSNBC clip, a law enforcement expert warned that anyone who complains about the sexualization of children will be punished by the legal system, sued into bankruptcy, and destroyed.

“Those people should face civil consequences from the victims,” declared Frank Figliuzzi, a former assistant director of the FBI.

Others on MSNBC suggested that because he signed a bill banning teachers from sexualizing kindergartners, Florida Gov. Ron DeSantis is responsible for this week’s mass shooting at a gay bar in Colorado.

If you don’t want a kindergarten teacher to talk to your kindergartner about sex, you’re anti-gay. Ron DeSantis is the spiritual father of a mass murder in Colorado?  Really?

No matter how you feel about Ron DeSantis or about sex, it’s not plausible. In fact, it’s ridiculous. Yet they keep saying it and the question is, why do they keep saying it? Well, they’re saying it because that’s how determined they are to keep you from talking about the subject.

They will call you an accessory to murder. They’ll threaten to sue you into poverty as the assistant director of the FBI just did, if you don’t shut up. It’s pretty weird when you think about it. In fact, it’s very weird, but they have nothing else to say because actually children really are being sexually exploited in this country, in some cases for money. It’s not hidden. It’s in the open and it’s totally real.

Turning his attention to the burgeoning transgender “affirmation” medical industry, Carlson spoke of the “atrocities underway at Vanderbilt Medical Center in Nashville,” where a physician admitted to mutilating the genitals of children because it’s a profit center for the hospital.

These surgeries make a lot of money.

Female to male chest reconstruction could bring in $40,000. A patient just on routine hormone treatment I’m only seeing a few times a year can bring in several thousand dollars without requiring lots of visits and labs. It actually makes money for the hospital.

The Fox News host drew attention to similar horrific practices at children’s hospitals in Philadelphia and Boston. He said the mindsets of these medical professionals are “Truly insane. Utterly divorced from legitimate medicine.”

What these medical practitioners are doing is “not science. That doesn’t bear any resemblance to science,” Carlson said. “It is a dangerous cult that is causing irreparable harm to children — not just a few, but a lot.”