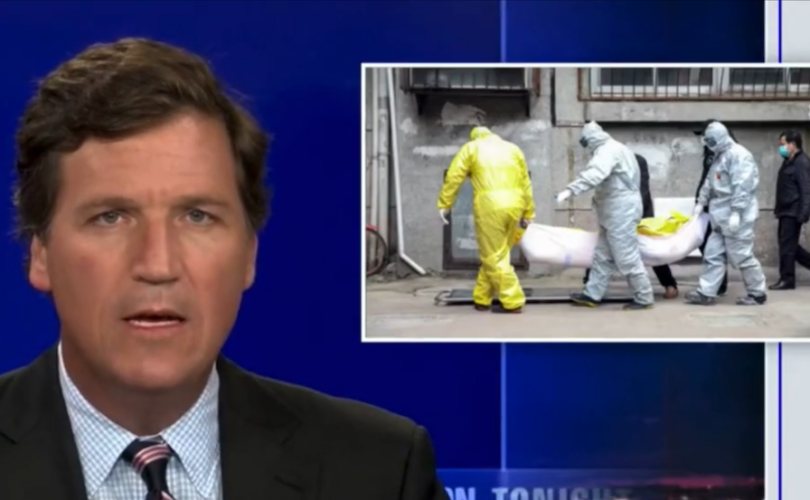 SHANGHAI (LifeSiteNews) – On Monday, Fox News’ Tucker Carlson condemned the communist Chinese government for starving its own citizens in a new COVID lockdown of the more than 25 million inhabitants of Shanghai, saying the lockdown has created “the largest prison camp in human history.”

“The government of China has just completely shut down the city of Shanghai,” Carlson reported. “The lockdown there is by all accounts more brutal and more far-reaching than anything we saw in Wuhan two years ago.”

Videos have surfaced on social media revealing that citizens and foreigners are being physically locked in their homes from outside by the Chinese police, sometimes with bicycle locks and padlocks, according to local reports.

Carlson pointed back to the 2020 lockdown, in Wuhan in which citizens’ doors were sometimes welded closed from the outside so as to prevent persons who tested positive for COVID from leaving their homes. This caused some to die of starvation, Carlson said.

Carlson showed a recent video that surfaced, in which a child is taken alone by van to a COVID “internment camp.” According to Carlson, these COVID quarantine camps sometimes lack water and other basic human necessities for the many persons isolated in them.

Carlson revealed that Chinese officials have adopted a “COVID-0 policy.”

Chilling videos revealed Chinese citizens screaming from the wealthy skyscrapers of Shanghai because they are starving within their homes. “Has there ever been a clearer picture of what Hell is like?” Carlson asked. “25 million people imprisoned in concrete apartment blocks and slowly starving.”

The world Klaus Schwab wants for the west: people of Shanghai screaming out their windows after weeks of forced confinement to their pods pic.twitter.com/KxAaArPH47

According to a western journalist in Shanghai, “This is the biggest, richest, most international city of China and people are starving, without medicine, and without freedom.”

According to local reports, stores have run out of food supplies and couriers cannot keep up with the demand of online orders. One man was seen on video shouting in the street “What am I supposed to buy? What am I supposed to eat?” Protests have erupted in the streets, with people yelling at the police, “We are starving.” In response, the government has tried to control crowds with on-the-ground officers and patrol drones that declared by loudspeaker, “Control your souls’ desire for freedom.”

People are starving, these are the only food left for an entire community pic.twitter.com/y6NFu4qNST

According to Carlson, given the size of Shanghai and its large presence of foreign nationals, it presents the greatest threat to the ruling Chinese Communist Party (CCP), especially this year, as China’s dictator Xi Jinping prepares for re-election in the fall for a third consecutive term. His re-election was made possible when the CCP lifted the existing term-limit four years ago, a controversial move even for communist China. With no limit on the number of terms, the Chinese leader can now rule for life.

Carlson called on the U.S. government to denounce the dictatorial lockdown in Shanghai as “the world’s largest prison camp.”