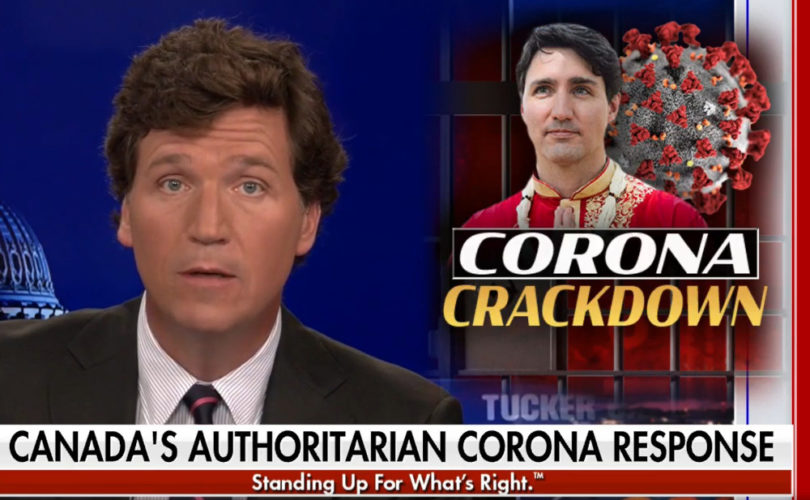 “What if your next-door neighbor suddenly went dangerously insane and started holding people hostage in his house?” asked Carlson.

“Canada, the land mass directly to our north and our single largest trading partner, with whom we share the longest international border in the world, took a dramatic move towards legitimately dangerous authoritarianism,” he continued. “Yes, Canada.”

Carlson was referring to the Liberal government’s COVID-19 policy regarding Canadian residents who return from abroad and test positive for the coronavirus. On Monday, Prime Minister Justin Trudeau delivered a message to the nation telling Canadians to cancel any holiday plans and telling them what to expect when returning from necessary travel.

“If you’re flying back into the country, you’ll need to show a negative PCR test result before you board the plane,” Trudeau said. “When you land, you’ll need to take another PCR test. You’ll then have to wait at an approved hotel, and at your own expense, for your results to come back.”

“If your results come back negative for COVID-19, you’ll be able to head home and finish your mandatory quarantine there,” he added.

It was the next part of the message, however, that inspired Carlson’s fears for Canadians’ basic human rights.

“If your test results come back positive, you’ll need to immediately quarantine in designated government facilities. This is not optional,” warned Trudeau.

In response, Carlson said that “designated government facilities” in other countries would be instantly understood as “internment camps.” However, neither the American government nor the American media seemed to have noticed the human rights violations so close to home.

“Trudeau’s internment policy has been in place since last month, and as far as we can tell, no major U.S. news network has mentioned it,” the host declared. “Neither has our State Department, which ordinarily seems to exist to make unhappy noises about human rights violations around the world.”

Carlson suggested that Canada’s reputation as an unexciting place had allowed Trudeau to get away with internment camps, and that Canada was a dull place no longer.

“Suddenly, Canada is a flagrant violator of the most basic human rights,” he said. “Fail a COVID test and they’ll lock you up without a trial.”

He added that anyone who attempts to avoid being detained in a “government internment facility” might face a million-dollar fine and three years in prison.

The American news host allowed himself some rough humor at the Canadian prime minister’s expense, saying, “It’s funny, Trudeau always seemed like a cheerful idiot, wearing weird costumes and yammering on about diversity. Who knew he was Mussolini?”

Carlson also described the substandard conditions in which Canadians are held when they test “positive” for COVID-19: food and water shortages, locks missing from doors, even sexual assaults. He cited Canadian businessman Mitch Beaulieu, whose account of being taken to a designated government facility sounded, Carlson said, like a kidnapping.

The pundit also took a swing at Canada’s national, tax-funded broadcaster, the Canadian Broadcasting Corporation (CBC) for having reported orders from Ottawa that Canadians should not believe “disinformation” about internment camps.

“The CBC assured Canadians that the government was preparing ‘voluntary quarantine sites,’” Carlson reported. “Yes, voluntary in the sense of being mandatory, which is what they are.”

Carlson noted that Canada has “fallen behind” on its vaccination program, giving the excuse that it had believed more than other countries in the global supply chain. The word “global” inspired the pundit to new flights of sarcasm.

“Oh, they believed the whole globalism thing worked. That turned out to be a mistake. But rather than admit that globalist stupidity is the problem, Justin Trudeau decided to punish his own citizens,” Carlson said.

“It’s his fault, and the population gets punished. Recognize that impulse? It should, because neoliberalism is always the same, no matter where you find it.”

Other points he brought up that are sure to depress Canadians are that no other infectious disease is being treated that way, and that even though Canadians are being dissuaded from returning from abroad, 400,000 new immigrants are being welcomed into the country over the next eight months. Finally, Carlson showed video footage of Trudeau celebrating the opportunity the pandemic had brought for the “Great Reset.”

In this, the Fox News host said, Trudeau resembled John Kerry, who said that America has already done a Great Reset and is at the “dawn of an extremely exciting time.”

“For power-mad leaders hoping to eliminate centuries of constitutional restraints on their own ambitions, it is indeed an exciting time,” Carlson scoffed. “Could what’s happening in Canada happen here? That’s the question.”

Because even Americans who have been vaccinated are being ordered to continue wearing masks, Carlson is wondering what might be planned for people in the U.S. who refuse to obey — perhaps being held without trial.

“Think that couldn’t happen in America?” he asked. “It just happened in Canada.”

It has also happened in Australia, New Zealand, and Great Britain.