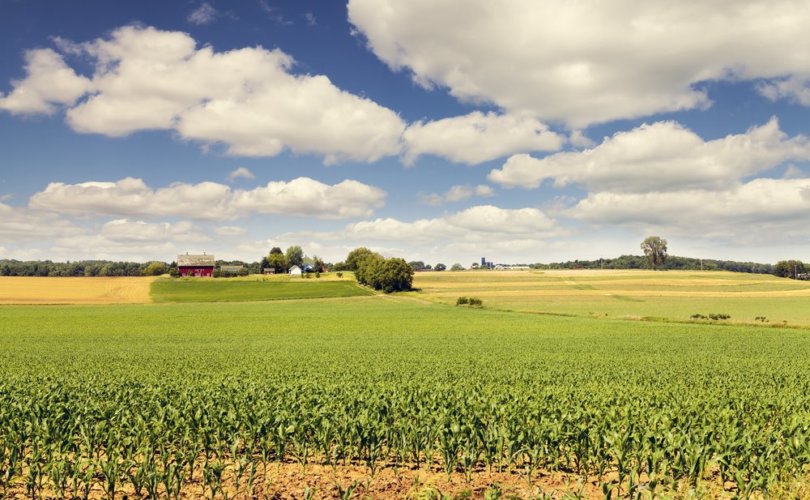 (LifeSiteNews) — An extraordinary number of disasters at food processing plants around the United States is contributing to grave concerns that the West is being threatened with food shortages.

In an April 25 broadcast, Fox News host Tucker Carlson explained, “America [has] the most fertile farmland in the world, it’s always had some of the cheapest food prices in the world. That could be changing.”

“All of a sudden, prices are skyrocketing for staples, your grocery store is not full. It means that our country’s food supply is not secure,” he said.

Contributing to these dangerous trends are a curious number of explosions, fires and even two plane crashes into food processing or storage facilities around the nation.

Fox contributor Trace Gallagher reported this bizarre trend, showing that on average, between 2017 and 2019 there were six to eight such incidents per year at these facilities.  After skipping statistical readings in 2020 due to COVID-related government lockdowns, this number jumped to 11 in 2021.

“But already in the first four months of 2022, there have been 17 major incidents,” Gallagher reported. “We’re talking fires, chemical leaks, explosions, and in the span of just one week, during the safest point in aviation history, we also had two planes that crashed into food plants.”

While plane crashes are always investigated by the Federal Aviation Administration and National Transportation Safety Board, Gallagher noted, “it’s interesting that, despite the bad timing, and a huge uptick in destruction of food plants, so far, there does not appear to be a public and widescale investigation by either the FDA or the Department of Agriculture (USDA).”

“We’re not saying any one group is responsible for these fires. We don’t really know what this is about. But we do know it’s happening during what is turning out to be a disastrous year for food production in the United States,” Carlson explained.

He went on to cite the current tragedy of the avian flu, which has caused the deaths of an estimated 24 million poultry birds, mostly chickens and turkeys, according to the USDA, along with “the ongoing tragedy of ethanol, which has hiked farm prices to a point where it’s not even worth it to farm for crops that you might eat.”

Another concern is how the war in Ukraine has impacted fuel prices and food supply chains.

Biden administration Treasury Secretary Janet Yellen recently acknowledged how Western sanctions against Russia have caused significant damage to European nations who have seen extreme energy price increases, exceeding 80%, while “very little negative impact [is caused] on Russia because although Russia might export less, its price for its exports would go up.”

In addition, Russia has successfully maintained its enormous world markets in China, India and elsewhere.

Such energy inflation in the West is leading to massive food inflation due in part to increased costs in farming production. Part of these skyrocketing prices are also explained by a further scarcity of fertilizer of which Russia and Ukraine and major world producers.

As Reuters reported in March, “Western sanctions on Russia, a major exporter of potash, ammonia, urea and other soil nutrients, have disrupted shipments of those key inputs around the globe. Fertilizer is key to keeping corn, soy, rice and wheat yields high. Growers are scrambling to adjust.”

In response to this report, Carlson stated in a March 25 episode that “those ingredients are necessary to put food on your table, at a price you can afford. If you don’t have those ingredients, what do you get? Food shortages,” he said.

“Fertilizer bills are expected to jump around 15% just this year, and they could go higher. Some farmers say they are already seeing fertilizer prices go much higher than that,” the Fox News host explained.

“There’s a lot of fertilizers that are four and five times more expensive than they were a year ago,” said Charlie Vogel of the Minnesota Association of Wheat Growers. “Fertilizer has drastically outpaced the rate of inflation.”

After a March summit with the North Atlantic Treaty Organization (NATO) in Brussels, Belgium, Joe Biden announced food shortages were going to be “real.”

“With regard to food shortage, yes, we did talk about food shortages, and it’s going to be real,” he said. “The price of these sanctions is not just imposed upon Russia. It’s imposed upon an awful lot of countries as well, including European countries and our country as well.”

Biden went on to report how government leaders in NATO sought solutions by encouraging increased production and dissemination of wheat in the U.S. and Canada due to the disruption of exports from Russia and Ukraine, which he referred to as “the breadbasket of Europe.”

With global food prices increasing 12% between February and March alone, according to the U.N.’s Food and Agriculture Organization, Carlson said, “So, sanctions have thrown American agriculture into profound turmoil and will cause again, as the president has told us out loud, food shortages, which are maybe the most destabilizing trend you could ever have in a country — not just to the politics but to the social fabric. It’s scary.”

Biden says food shortages are ‘going to be real,’ not only in Europe but in US
How to prepare for possible food shortages
Skyrocketing prices and food supply shortages in Germany are partly due to war in Ukraine
Rockefeller Foundation president predicts ‘massive’ global food crisis, calls on US to find solutions