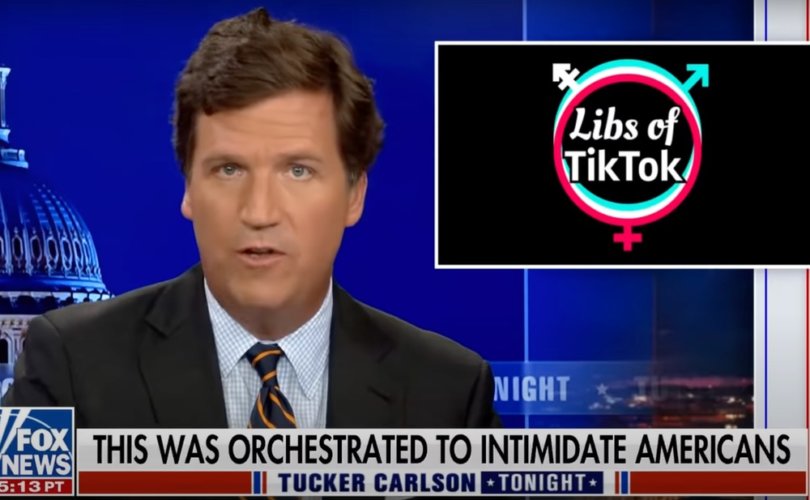 (LifeSiteNews) — Fox News host Tucker Carlson on Tuesday blasted the alleged foreign government-funded “intimidation campaign” that he said has been launched against the “Libs of Tik Tok” Twitter account through the doxing of its anonymous creator this week.

At the top of his Tuesday night show, Carlson explained that the massively popular conservative Libs of Tik Tok Twitter account was started last year by a woman in Brooklyn, New York, and “comprised almost solely of videos of liberals talking about themselves.”

“So the concept was very simple: Find interesting tape that had already been uploaded to the internet by the people who made it, and then re-post that tape,” Carlson said. “There was no editing of it, no special effects. There was very little editorial content. The idea was to let activist types describe in their own words what they believe, unfiltered.”

Since its launch last year, Libs of Tik Tok has brought in over half a million followers, which Carlson quipped “dwarfs the nightly viewership of CNN.”

Viral videos uploaded by Libs of Tik Tok have included many recorded by far left activists and radical teachers explaining how they introduce young children into LGBTQ+ sexual ideology, sparking outrage among parents.

“The parents guess the baby’s gender based on genitals and sometimes they make a mistake” pic.twitter.com/NMJHmyuk0l

“This is journalism,” Carlson said. “No news organization in America has done more to reveal the reality within American schools than Libs of Tik Tok.”

Libs of Tik Tok’s massive reach and influence on public discourse, however, put it squarely in the crosshairs of the left-wing corporate media.

This week, days after sobbing on MSNBC while decrying online harassment, Washington Post reporter Taylor Lorenz drew massive backlash when she doxed Libs of Tik Tok’s anonymous creator in a hit piece in which she exposed her name, workplace, religious affiliations, and political views, after tracking down her family members.

Hi @TaylorLorenz! Which of my relatives did you enjoy harassing the most at their homes yesterday? pic.twitter.com/QehkBSgcmG

“This is obviously an intimidation campaign designed to shut down a highly effective Twitter feed,” Carlson said.

Accusing Lorenz of not being a journalist but “merely a receptacle for information that other people gather for their own ends,” Carlson questioned where Lorenz received the information she used to dox the account’s creator.

“Well, actually, we don’t have to guess, because today’s Washington Post story answers that question,” he said.

Carlson explained that, according to the Post article, the information on the account creator came from a man named Travis Brown, who runs the so-called “Travis Brown Hate Speech Tracker,” which Carlson said “uses a variety of proprietary methods to reveal personally identifying information of private citizens who stray from the approved storyline.”

The Fox News host explained that the “Hate Speech Tracker” is funded by the Prototype Fund, a “project of the Open Knowledge Foundation Germany,” which is “funded by the Federal Ministry of Education and Research (BMBF),” according to the organization’s website.

“So again, who’s paying for this?” Carlson asked. “Well, a foreign government is paying for it. The Prototype Fund gets its money not from private donors, but from the government of Germany. Germany’s federal ministry of education. It says so right on the website.”

Carlson argued that The Washington Post’s hit piece against Libs of Tik Tok was therefore “a foreign intelligence operation designed to silence and intimidate an American citizen.”

Asking why “the German government trying to shut down an American Twitter account posting about American teachers,” Carlson suggested that since Lorenz allegedly received “information from a foreign government,” which was “designed to destroy an American citizen,” The Washington Post reporter should have “at the very least registered under the Foreign Agent Registration Act (FERA).”

The Fox News host went on to point out that there has been “quite a bit of talk about this over the last few years.”

“There was an impeachment trial over it,” he said, challenging the fact that Lorenz can allegedly “take information from a foreign government to crush an American citizen,” and remain “a journalist in good standing with Jeff Bezos’ newspaper.”

“Lots of questions here,” Carlson said. “We hope we can get to the bottom of all of it.”

Libs of Tik Tok’s creator later joined Carlson on his show, saying that despite efforts to silence her, “that’s just never gonna happen.”

They think doxxing me is going to intimidate me into silence. I can assure you, that’s never going to happen. pic.twitter.com/Icxz7tg5yL