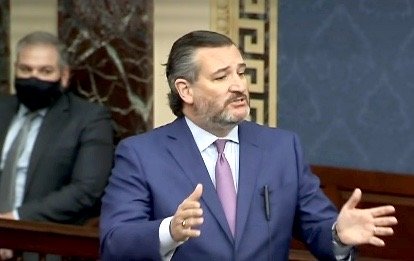 WASHINGTON (LifeSiteNews) — Conservative U.S. Sen. Ted Cruz (R-TX) apologized on Fox News pundit Tucker Carlson’s show Thursday evening for calling the January 6, 2021, Capitol riot a “violent terrorist attack,” a framing that played into left-wing narratives about not just individuals who broke the law last year but the much larger number of peaceful protesters at the event preceding it.

Last year, protesters broke into the U.S. Capitol building on January 6 after former President Donald Trump’s “March to Save America” rally, which was meant to encourage Republican lawmakers to delay the certification of electoral votes from a handful of states over concerns about vote fraud in the 2020 presidential election.

Viral videos showed people engaging in physical altercations with police, pushing against security barricades, breaking through windows, trespassing in congressional offices, and climbing on walls, causing the vote certification to be suspended and lawmakers to be evacuated from the chambers. Other video, however, showed that many were let into the Capitol by police and simply walked the halls after the initial breach.

The hostilities began among people who either left Trump’s speech early or skipped it entirely, but House Democrats quickly moved to impeach the president for supposedly “inciting” violence through his rhetoric. The Senate voted 57-43 against Trump in his impeachment trial, but failed to amass the 67 votes necessary to convict and bar him from seeking office in the future.

The day before the first anniversary of the riot, Cruz called January 6 “an anniversary of a violent terrorist attack on the Capitol, where we saw the men and women of law enforcement demonstrate incredible courage. Anyone who commits an act of violence should be prosecuted, and anyone who assaults a law enforcement officer should go to jail for a very long time.”

“Every word Ted Cruz uses is used intentionally. He’s a lawyer,” Carlson reacted that evening. But “of all the things that January 6 was, it was definitely not a violent terrorist attack. It wasn’t an insurrection. Was it a riot? Sure … You’re making us think maybe the Republican Party is as worthless as we suspected it was. That can’t be true. Reassure us, please. Ted Cruz?”

The next evening, Cruz went on Carlson’s show to apologize, calling his phrasing “dumb,” clarifying he meant only to refer to a limited number of genuine violent rioters, and claiming he simply used the same language he has always used to describe violence against law enforcement:

I was NOT calling the thousands of peaceful protestors on Jan 6 terrorists. I would never do so; I have repeatedly, explicitly said the OPPOSITE—denouncing the Democrats’ shameful efforts to do so & to try to paint every Trump voter in America as “terrorists” & “insurrectionists”

The snippet from yesterday didn’t include my passionate & repeated defense of the patriots and peaceful protestors supporting President Trump. I’m sorry that that 20-second clip led so many to misunderstand what I was saying.

A cursory search of Cruz’s social media presence yielded several past examples of Cruz referring to left-wing activists as terrorists for assaulting or killing police officers:

If you dislike being called “enemy of the people,” perhaps don’t glorify violent terrorists who are committing criminal assaults and firebombing police cars? https://t.co/uApL44kccD

Biden DOJ LETS THE TERRORIST GO with a slap on the wrist.

This is WRONG. It is partisan. And political. If you assault a police officer, you should go to jail for a long time. Whatever your politics. https://t.co/BlNyBkT7P0

Just how well his mea culpa will satisfy his current supporters remains to be seen, but the snafu is likely to haunt Cruz if he proceeds with a hypothetical presidential run in 2024. Last month, the senator suggested he would start such a campaign with an “enormous base of support” because he was the runner-up for the Republican nomination in 2016. Cruz said he would consider running again “in a heartbeat.”

If he did, Cruz would likely have to contend with his 2016 rival Donald Trump, now a former president who retains his own loyal base (some of which may sour on him over his continued support for the controversial COVID-19 vaccines), as well as Florida Gov. Ron DeSantis, who has risen to prominence due to his leadership against COVID orthodoxy and proactive conservative record.