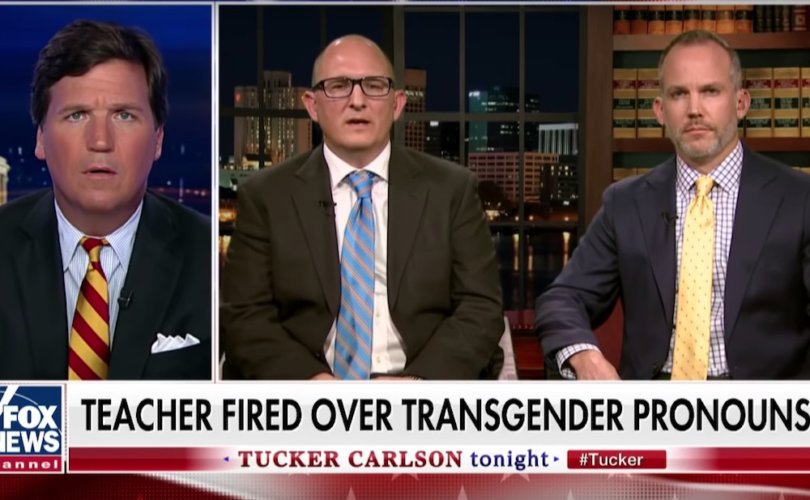 December 18, 2018 (LifeSiteNews) – A high school French teacher fired earlier this month for respectfully refusing to refer to a female student as male took his case to national television on Monday, in an interview with conservative commentator Tucker Carlson.

“It’s almost impossible to fire a public school teacher for incompetence, go ahead and try it, you’ll find out,” Carlson began, “but it turns out it’s very easy to get one fired for thought crimes.”

As LifeSiteNews previously reported, Peter Vlaming taught at West Point High School in Virginia. This school year, one of his female students came back having “transitioned” to living as a boy over the summer, and wanted to be recognized as such. Vlaming agreed to use the masculine name she had chosen and attempted to avoid referring to her with female pronouns, but said his Christian faith prevented him from calling a girl “he” or “him.”

For clarity, Carlson first asked whether Vlaming had insulted the student in any way, which the teacher emphatically denied.

“I love and respect all of my students, including the student in question. And I did everything I could to accommodate the student’s new identity – I used the new name, I avoided feminine pronouns,” he said. “Male pronouns were a bridge too far, but I did everything in my power to accommodate and show respect toward this student and this student’s choices.”

Vlaming added that he avoided expressing an opinion about transgenderism in the classroom, because “it’s not my place as a public school teacher to give my view on that subject.”

“To our understanding this is the first time in the country” a teacher has been fired for refusing to say something, Vlaming’s attorney Shawn Voyles said. “And we should make clear, Tucker, that all we’re asking for is that tolerance be a two-way street here. Peter respected this student. All he’s asked for, all he still asks for, is that respect be extended to him and to his rights.”

“This is a case of compelled speech, really,” Voyles summarized.

Carlson noted that his staff “called around and everyone we’ve talked to confirms your account” of the situation, then asked Vlaming what happened next. Vlaming explained that the school gave him an ultimatum not only to indulge the student’s preferred pronouns in her presence, but “I was told I had to use male pronouns even when students weren’t present,” such as during private discussions among fellow teachers.

“Tucker, we should point out that the school actually took the position contrary to biology,” Voyles noted. “Peter was given an ultimatum by the superintendent, that he should treat the student like every other male student or he would be fired.”

Carlson concluded the segment by marveling that he has “never seen anything like this,” and quipping that Vlaming “should have just been incompetent and you’d still be teaching there, like a lot of other incompetents I’m sure.”

After Vlaming was fired, dozens of students staged a walkout to protest the decision, holding signs and chanting “bring him back!” Some protesting students quoted by local media clarified that their displeasure was directed at the school board, not their gender-confused classmate.

Neither Vlaming nor Voyles have yet revealed their next move, which could be to file an appeal with the King William County Circuit Court.