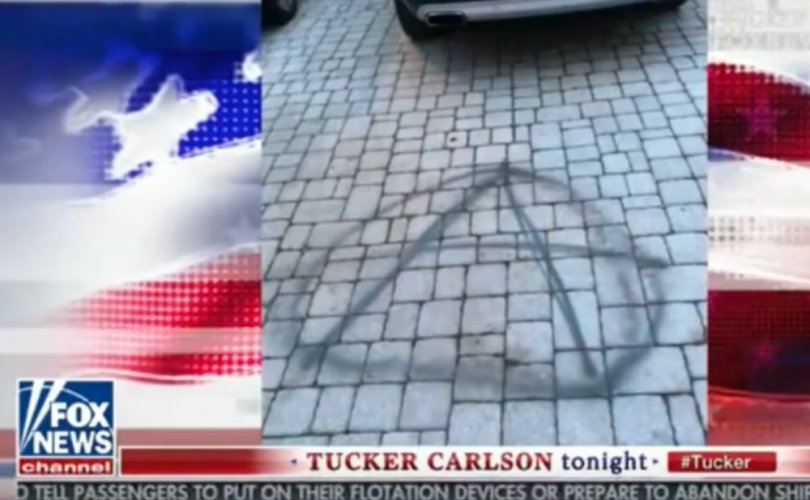 Members of the group Smash Racism DC gathered in front of Carlson’s Washington, D.C. home Wednesday evening to, in their own words, “remind you that you are not safe.” They chanted that the conservative pundit and Daily Caller co-founder is a “racist scumbag” who should “leave town,” and threatened that “we know where you sleep at night.”

At one point protesters slammed against their front door hard enough to crack it, which led his wife Susie, the only one home at the time, to suspect a home invasion, lock herself in the pantry, and call the police. Carlson was at Fox’s D.C. office preparing to tape his nightly show at the time.

The next day, Fox News morning host Brian Kilmeade started filling in for Carlson for the latter’s pre-scheduled vacation, and addressed the incident at the beginning of the broadcast. Kilmeade revealed additional details, including that an anarchist “A” symbol had been spray-painted in the driveway and that “mail bomb” had been shouted at one point.

Carlson himself called into the show for the opening segment, where he discussed how it felt to have his wife fear for her life and to know his four children might potentially be at risk in the future.

“If we find ourselves in a country where men aren’t allowed to say they wanna protect their wives, you know, I don’t wanna live in that country, that’s totally sick and unnatural,” Carlson said. “So of course I feel that obligation and it’s my deepest obligation.”

“I think the worst thing that they did, was they put my home address on the internet,” he noted, “so I can’t have my kids stay home alone now […] I’m not a talk show host when I get off the air, I’m a father. I don’t want to have those battles in my personal life, I don’t think most people do, and now they’ve brought it right to my house.”

Carlson said that he was fortunate enough that it’s his job to speak with the support of Fox News, but examples like this experience would have a stronger “chilling effect” on Americans who “don’t have that lucky combination of circumstances” and “really feel like they have to shut up, that they can’t say what they think because they’ll be punished.”

“It’s totalitarian, it’s intense, and we should fight it,” he said.

“I’ve characterized the Antifa people and people like them as protesters, but they’re not. They weren’t protesting anything,” the host added. “The irony is that this is the one show that regularly invites people like that on to say what they think.” He also pointed out that a former guest on his show may have been among the screamers.

Carlson didn’t name the individual on the air, but the Daily Caller reports that Smash Racism DC co-founder Mike Isaacson, who appeared on “Tucker Carlson Tonight” last year, admitted to having known that the group obtained personal information on Carlson and other “far right personalities.” Isaacson denies having worked with Smash Racism DC in the past three years, but says he “support[s] their actions.”

Despite his family’s ordeal, Carlson added that it’s also been “really nice and affirming” to be reminded that “most people are humane and decent and kind,” because “for every masked lunatic outside my house there are a hundred people, some of whom I don’t agree with politically, calling or sending texts of support and kindness.”

D.C. police say that a criminal investigation into the threats against Carlson’s family is underway, but no arrests have yet been made.