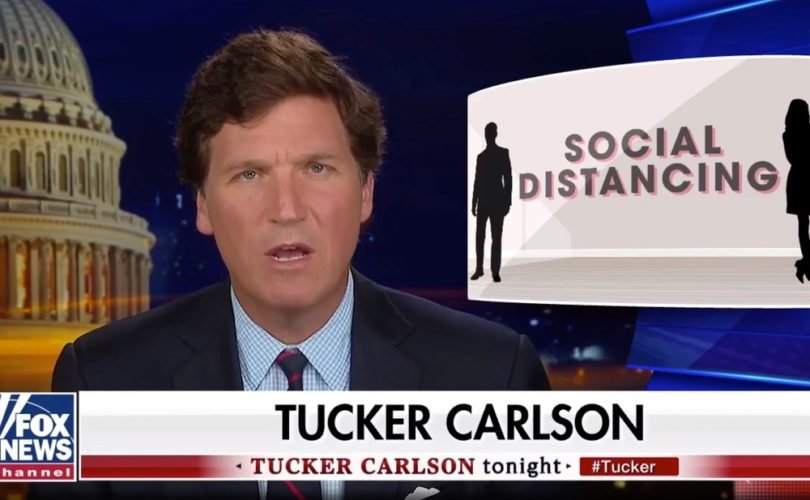 In a March 15 broadcast Carlson probed the Centers for Disease Control and Prevention’s (CDC) guidelines around so-called social distancing, which currently stipulate that, when “going out in public, it is important to stay at least 6 feet away from other people.” He noted that as recently as last year, “most Americans understood that social distancing was a form of punishment. It is not good for man to be alone,” he said, in reference to the book of Genesis.

“Apart from the death penalty,” Carlson added, “the harshest thing we do to criminals in this country includes separating them from other people. Prisoners have chosen lethal injection over solitary confinement. That’s how badly human beings need to be close to one another.”

Despite the necessity of normal human contact, governments around the world imposed six-feet distancing measures supposedly as part of an effort to curb the spread of COVID-19. Carlson questioned the significance of the six-foot measurement and why it might have been chosen as the standard.

“It turns out the research that formed the basis of that law came from a German hygenicist [sic] called Carl Flügge,” he said.

Flügge’s social distancing theory was devised during the 19th century, over one hundred years ago, “before most Americans had electricity or indoor plumbing,” Carlson observed. He later characterized the research as “a guess, and it was wrong.”

A new study, released Wednesday in the Journal of Clinical Infectious Diseases, found that six-foot physical distancing bears little to no impact on the transmission of the coronavirus. The research group considered coronavirus cases in schools in Massachusetts, which required six-foot physical distancing, comparing the results with schools which had required a three-foot distance at all times. Carlson related that researchers found “no statistically significant difference in coronavirus cases between the two.” This was the case for both students and staff.

Given the study’s findings, the researchers concluded that “lower physical distancing policies can be adopted in school settings with masking mandates without negatively impacting student or staff safety.”

Carlson said that the study has “massive implications” for the president’s chief medical adviser, Dr. Anthony Fauci, since the study is not the first of its kind.

The Lancet, a world leading scientific journal, published a paper in June 2020 that arrived at the same conclusion as Wednesday’s study from Massachusetts: “For the general public, evidence shows that physical distancing of more than 1m [3.2ft] is highly effective,” which, if Fauci had read, meant he already knew last summer that three feet was enough of a physical distance measure, but neglected to mention it, Carlson declared.

Carlson accused Fauci of treating the six-foot distance as on a par with physical principles “like gravity or photosynthesis” when it was clear that some serious dissent existed in the scientific community on the matter.

He noted the condemnation of Australian aerosol physicist Lidia Morawska, who “likened social distancing to a cult ritual. The dogma was born. Like any dogma, it’s extremely difficult to change people’s minds and change the dogmas,” she said.

“So dogma posing as science, it was all just faith-based and had massive consequences,” Carlson added. “Millions of American school children have not been educated for a year because the CDC turned century-old German theories about tuberculosis into a kind of modern, state-enforced religious faith.” He later quipped: “it’s enough to make you feel sick.”

A segment displaying “pods,” a selection of small, tent-like structures into which school children were forced in order to play musical instruments, was shown as an example of how Fauci’s physical distance commandment is being implemented. Carlson mocked the setup and called hypocrisy on the supposed health benefits of such measures: “Getting less oxygen is good for you, so get inside your little plastic pod like freeze-dried people.”

Towards the end of his scorching monologue, Carlson focused on the politicization of public health policy over the last year. He recalled last summer, when “dozens of public health experts exempted BLM from coronavirus restrictions.”

Carlson said that BLM riots were exempted “not because science demanded that BLM get a pass, but because they personally [the health officials] supported BLM.” He explained that a group of scientists, supposedly representing the scientific community, signed a letter that “will live forever in infamy.”

The letter claimed that “the risks of congregating during a global pandemic shouldn’t keep people from protesting racism. The scourge of white supremacy is a lethal public health issue that predates and contributes to COVID-19.” Carlson ridiculed the statement, saying the letter is tantamount to being told that “your racism caused COVID.”

In that instance the scientific community, therefore, justified riots on the basis of “public health.”

“Our leaders and public health experts are clearly guided, some of them anyway, by politics … it’s monstrous,” Carlson said.

He argued that the same political games are being played in the field of COVID-19 vaccines, with science being usurped by politics. According to Carlson, people have questions about the safety and efficacy of the available COVID-19 injections, but they are brushed aside and branded “anti-vaxxers” instead of having their questions answered, like scientists should do. Pressure from the government to take the vaccine only exacerbates this problem, with figures like President Joe Biden recently suggesting Americans won’t be able to celebrate July 4 unless they’re vaccinated and they continue to follow other coronavirus regulations until then.

There are still many unknowns regarding the new coronavirus shots. Carlson pointed out that “Germany, France, Italy, and Spain…have just suspended the distribution of the AstraZeneca vaccine. They are saying it could be linked to deadly blood clots.”

Just last month the Food and Drug Administration (FDA) and CDC were described as “looking into reports that Moderna and Pfizer’s vaccine” could also be causing blood clots. A 56-year-old doctor, Gregory Michael, died of a brain haemorrhage just two weeks after receiving a shot of Pfizer’s jab, Carlson noted.

“Should this scare you? We don’t know. But the rest of us deserve an answer. Instead, our leaders are acting, once again, as if the science was totally settled and you’re not allowed to ask questions.

“If you want them [the public] to take the vaccine don’t berate them. Don’t issue commands. Calm their fears by rationally explaining the benefits and the risks of taking the vaccine; that’s how you deal with adults.”

Data from the Vaccine Adverse Events Reporting System (VAERS), run by the CDC and documenting side-effect reports from December 14, 2020 until March 5, 2021, displays 31,079 adverse effect recordings following injection with either the Pfizer or Moderna COVID jabs. 1,524 deaths were reported, with 259 deaths being reported in the week leading up to March 5. Of the reported deaths, 30 percent occurred within 48 hours of receiving the jab.