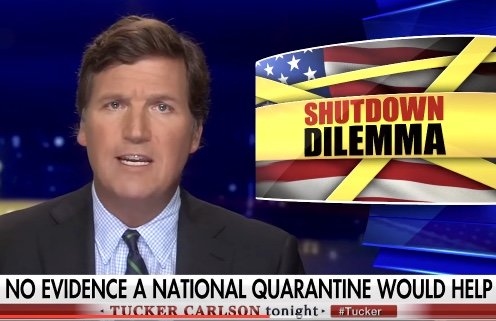 WASHINGTON, D.C., April 7, 2020 (LifeSiteNews) ― Fox News host Tucker Carlson has criticized World Health Organization’s (WHO) top emergency expert for suggesting to authorities that they find those who may have the coronavirus in family homes and “remove them.”

Carlson brought attention last night to a statement by Mike Ryan, WHO’s executive director of emergencies program. Ryan declared that in response to the COVID-19 pandemic, officials may have to enter homes and remove family members. He played a clip of a WHO official saying the contagion has been “taken off the streets and pushed back into family units.”

“Now we need to go and look in families to find those people who may be sick and remove them and isolate them in a safe and dignified manner,” Ryan said March 22.

Sign the petition asking Trump to pull WHO funding here.

“Just so you know, we’re coming to your house, seizing your children and ‘isolating them in a safe and dignified manner,’ whatever that means,” he translated.

The Fox host observed that this is not the kind of statement that officials ”casually drop” during press briefings, and normally such “threats” to take away children might normally “trigger violence.”

However, the media treated Ryan’s declaration as if it were “no big deal.”

“(Ryan’s) threat didn’t make headlines in any of the major newspapers in this country,” he said. “That’s the kind of moment we’re in.”

Carlson, who sounded the alarm on the Wuhan coronavirus in January, noted that ordinary Americans are already being hurt by the economic shutdown. He cited the Mayor of Los Angeles’ suggestion that there may be two or even three lockdowns this year. He also quoted Harvard economist Jason Furman, who said “(w)e should certainly be prepared for a meaningful level of deliberate suppression of economic activity for the rest of the year.”

The Fox News host said it would be nice to know that there was a “good reason” for all this”; the arguments for a “prolonged national lockdown are starting to sound strained.”

For one thing, it is unclear that it is stopping the spread of the virus. Nobody knows what percentage of the American population is already infected with the virus or how many are now immune.

Carlson stated that there’s “some speculation” that COVID-19 has been in the United States since late November or early December. The first confirmed case in America was recorded in mid-January, and Americans were not quarantined “for months after that,” Carlson said. He reported that the virus is still spreading among strictly quarantined people in Italy, appearing in those who had neither symptoms nor any idea that they had the virus until it was found in blood tests.

“It’s starting to look like the coronavirus is more transmissible than we expected or were told. The good news is that it also seems far less lethal overall,” Carlson said.

He acknowledges that many people, even young and healthy people, are dying of the disease, which is “terrifying to watch.” However, this is far from being the experience of most people who get infected.

“As the data trickle, there’s evidence that many infected people are not sick,” Carlson reported and cited a study in Iceland, where five percent of all residents have been tested for the virus. Half of the people who have it are asymptomatic.

“So given all this, what is a wise response to this pandemic?” the host asked. He pointed out that mass quarantining hasn’t stopped the transmission in Italy. He also underscored that the current mass quarantining in the United States is not actually keeping people apart. Many residents are not allowed to go to work, but they are allowed to go with everyone else to their local grocery stores. Carlson wants an explanation of why it is less safe to go to work than it is to go to a busy supermarket.

“From an epidemiological standpoint, this is lunacy,” he said.

“If you wanted to infect an entire population, you’d encourage everyone in a specific zip code to meet regularly in one enclosed location. It doesn’t make sense.”

Carlson voiced dismay at the Mayor of Los Angeles offering citizens rewards for “snitching” on their neighbors for, among other things, going to work.

“We want to thank you for turning folks in and making sure we are all safe,” Mayor Eric Garcetti said.

“Working is one activity that we’ve decided should not be allowed,” Tucker stated.

“We’ve decided that offices are somehow far more dangerous than supermarkets, but no one has to date bothered to explain how.”

As a result, up to 17 million Americans are now unemployed, which is the highest number in history. Carlson said mass unemployment is “almost certain to cause far more harm” to the average family than the coronavirus. Unemployment is causing health-deteriorating stress, suicide, higher rates of drug abuse, and spousal and child abuse. Meanwhile, the drug epidemic alone brought about more than 67,000 deaths in 2018.

“The drug epidemic has permanently changed the demographics of this country, but for some reason CNN has not kept a running tally of drug casualties on the screen,” Carlson said.

The journalist believes that this is because the communities struggling with opiate addiction are not CNN’s “peer group” and so “they’re not that interested.” Carlson also suggested that if the lockdowns were threatening the livelihoods of college administrators, top executives, or “green lobbyists,” they would have ended “last week.” Instead, service workers and small business owners are bearing the brunt, and nobody is interviewing them on television.

While emphasizing that the coronavirus pandemic is very serious and should not be minimized, Carlson repeated that it is not the only serious problem afflicting Americans today.

“There has to be a more balanced course than the one we are on now,” he said.

“Otherwise, it’s time to start caring about the entire population. Healthy people are suffering badly, too.”

A Canadian priest who spoke to LifeSiteNews under condition of anonymity said young service people are indeed suffering from the lockdown.

“Waiters, waitresses, checkout people, store workers. Every mall in Canada is closed. This means that all those 20 to 35 year olds working retail in any fashion are now not working,” he said.

“My barber owned a salon with his wife, and his sister did nails. They’ve got rent payments and they’ve got kids. Nobody has worked in weeks.”

The priest said it was “nearly impossible” to minister to people under the lockdown conditions in his province, but that people’s enthusiasm for the sacraments has dimmed anyway.

“People initially were interested in confessions at a distance, but now they’re not even interested in leaving the house. There’s a subtle panic and nobody really wants to get sick,” he explained.

“With (the British) Prime Minister in the hospital, people realize they’re fair game.”