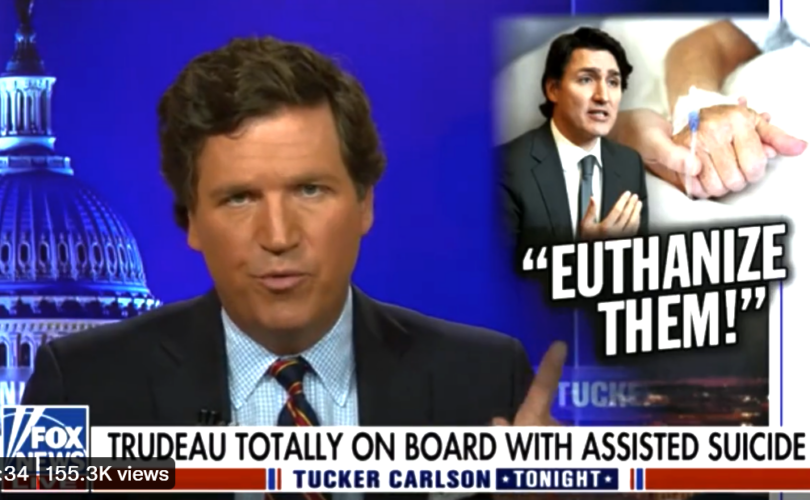 During Wednesday’s Tucker Carlson Tonight Show on Fox News, the host touched on what he referred to as a “very big change in Western civilization” as Canada stands poised to legalize new standards for euthanasia in March 2023. The news laws will extend Medical Assistance in Dying (MAiD) to those with mental illness after a temporary exclusion expires.

“This is about to become a lot more common in Canada as a way to cut down on healthcare costs,” Carlson warned.

Tucker Carlson says Trudeau’s MAID euthanasia program “is about to become a lot more common in Canada as a way of cutting down on healthcare costs” as a new law will allow children to be killed by doctors without the approval of their parents. pic.twitter.com/D0hotz0SAB

Carlson referenced Margaret Marsilla’s 23-year-old son Kiano, who sought approval for MAiD — despite his mother’s disapproval — on account of depression and diabetes. Carlson used this case as an example of the “low” that Canada has reached, expressing his concern that “doctors [are] killing kids without telling their parents because kids are depressed?”

Before this revelation by Carlson, LifeSiteNews reported September 28 that Kiano’s doctors had retracted their approval for euthanasia after backlash.

It’s believed that Kiano remains alive while trying to find a doctor who will sign off on his “medically assisted” death. According to a LifeSite News source who is a friend of Kiano’s family, doctors are rejecting his application because he is young and healthy “and has an abundant life ahead of him.”

During Carlson’s show, he also hosted Charles Camosy, a professor of Medical Humanities at the Creighton University School of Medicine who teaches Christian Ethics at Fordham University in the Bronx. The two of them discussed the rapidly declining situation regarding euthanasia laws in Canada.

Charles Camosy weighs in on Trudeau’s euthanasia program allowing children to be killed by doctors without the approval of their parents:

“We have to get off the couch and do something about this for those of us who see the writing on the wall here.” pic.twitter.com/IdytbBAWrT

“Let’s see if I have the laundry list right, Tucker,” Camosy said. “At this point, we’ve now got kids, or what they call ‘mature minors,’ we’ve got the homeless (we talked about that last time), the poor, the disabled, those with chronic pain, and … a physician’s group in Quebec who wants to kill newborn infants.”

“This is what happens, Tucker, when autonomy just goes nuts,” he added.

Carlson commented that Canada’s medical system has become comparable with the Nazis’, saying that they were “famous for doing this exact thing.”

“[The Nazis] used doctors to murder the weakest in [their] society,” Carlson said. “I thought doctors kind of agreed after the Second World War not to do things like this!”

“A doctor’s job is to help people, make them better, not to kill them and give up on them when they’re kids!” he said.

Camosy said the problem with the modern healthcare system is that it is losing its dignity as it is “hyper secularized, it is often based on cost-benefit analysis, even something called ‘quality adjusted life years.’”

“This is ableism right here,” he said.

Camosy said that in order for respect for life to return to Canada, and in order that such laws do not seep into the United States – where even assisted suicide has not been legalized in many states — ctizens must begin to support health care that prioritizes actual care over seeing death as a viable route.

“What we need to do, Tucker,” Camosy said, “ … is support in whatever way you can, health care that is about caring and not killing.”

“We have to get off the couch and do something about this for those of us who see the writing on the wall here.”