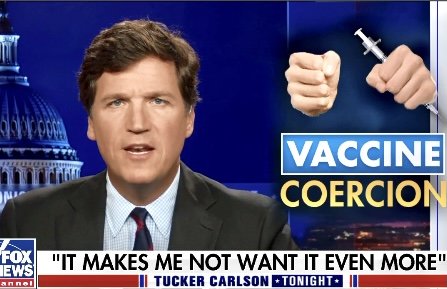 Carlson revealed that organizations associated with the Biden administration are going to partner with Big Tech to ensure that people cannot use their cell phones to share information about the COVID-19 vaccine that the government doesn’t like.

“What you say in private, when you’re alone with your phone, you won’t be able to say or read what you want because the DNC [Democratic National Committee] plans to control — and apparently have the ability to control — the information you receive on your phone,” he continued.

“Nothing that questions official regime policy will reach you.”

The pundit quoted a report in the left-leaning Politico magazine, which says “Biden-allied groups, including the [DNC], are planning to engage fact-checkers more aggressively, and work with SMS carriers to dispel misinformation about vaccines that is sent over social media and text messages.”

Carlson emphasized the word “misinformation,” asserting that it doesn’t mean inaccurate information, but factually correct information that the government doesn’t want spread around.

“Misinformation is anything the Biden administration doesn’t want you to know — including, for example, how effective the COVID vaccines actually are, and what the potential side effects from them might be,” the Fox News host said.

Carlson predicted a scenario in which viewers look up information on vaccine injuries on the government’s own websites, “starting with the VAERS database,” and discover they can’t text the information to anyone else in the country.

— Article continues below Petition —
PETITION: No to mandatory vaccination for the coronavirus
Show Petition Text
1081967 have signed the petition.
Let's get to 1100000!
Thank you for signing this petition!
Add your signature:
Show Petition Text

“Your private conversations will be controlled by the DNC,” Carlson said.

“Is that the picture of a free country?”

Carlson had a lot of other questions — like what else the government can do if it can ban the discussion of a medication, and why the ban on sharing vaccine information is happening as the pandemic itself slows down.  He also wondered why the government is so “angry” at people who don’t get vaccinated when all those who have gotten vaccinated are presumably safe.

“According to the administration, the vaccine works perfectly, so vaccinated people are protected from COVID,” Carlson said.

“That’s why they took the vaccine in the first place. So why is official Washington so angry at the people who won’t get vaccinated?” he asked.

“How precisely do they propose a threat? It makes you think that maybe none of this is really about COVID. Maybe it’s about social control.”

To illustrate, Carlson played a clip of an interview with NIAID director Dr. Anthony Fauci, who said he believes, and has believed, that there should be “mandates” about vaccination “at the local level,” that is, mandatory vaccination.

“Do you remember hearing that when they first rolled out the vaccine, that [they’re] for mandates?” the Fox News host asked.

“No, they said they’re not for mandates, actually — but now they are,” he continued.

“These drugs will be mandatory; in many places they already are. If you want to get an education, for example, you need to take one. Many questions arise from this — deep questions about civil liberties and what it means to be a free country. But even on a medical level, questions arise. Do we know enough to make these drugs mandatory?”

Carlson told his viewers that the FDA is going to issue a “new warning” about the Johnson & Johnson COVID-19 vaccine because it has been linked to a nerve disorder called GBS, which causes paralysis. The VARES Database lists GBS as a “potential symptom for every other COVID vaccine, too,” the pundit said, and he contrasted the government’s response to this danger to the 1976 decision to end a mass flu vaccination when hundreds of Americans developed GBS.

“[In 1976] people started asking questions, and very quickly, the Ford administration determined the vaccine wasn't worth the risk,” Carlson said.

“But that's not happening now. People are not asking those questions because they can’t – they’re not allowed to in public.”

Sadly, people who do ask questions about the vaccines are accused of having self-serving political motives. In another clip Carlson played, Fauci called unwillingness to get vaccinated “ideological rigidity” in “red states” and the American South. In another, Dick Durbin accuses Tucker Carlson and Laura Ingraham of being “anti-vax quacks” who “have been spreading irresponsible information about vaccines across America.”

“He did not accuse us of being factually wrong. We haven’t been,” he continued.

“Nor are we against vaccines. Few Americans are against vaccines. Virtually every American has had a ton of vaccines and was expecting to take this one. But when you refuse to answer basic questions about the vaccine and when you dodge them with partisan talking points like that, you make people nervous.”

Sadly, people with questions about the vaccines are accused even of being racist. Carlson repeated government data that African Americans are the racial or ethnic group least willing to take the vaccine. Nevertheless, such pundits as Dr. Chris Parnell call people warning against the COVID-19 vaccines “another example of the proliferation of white supremacy.”

“Something is very wrong with our system,” Carlson stated.

After the lunacy, there’s irony. Carlson stated that the people who are trying to force Americans to take a COVID-19 vaccine are the same ones who have “lectured us for decades about ‘my body, my choice.’”

“The former head of Planned Parenthood, who is a truly irresponsible person called Lena Wen, just went on television to explain how to force millions of Americans to take the drug,” he continued.

“It’s easy, she said. Just make their lives as miserable as possible until they comply.”

Carlson then played a clip of Wen saying that “it needs to be hard for people to remain unvaccinated.” She suggested that those who opt out should have to be tested for the virus twice a week.

“Basically, we want to make getting vaccinated the easy choice,” Wen said.

The Fox host also highlighted an executive order in the U.S. Army to make the COVID-19 vaccination mandatory for soldiers by September 1.  Carlson stated that this is the first time since the Army forced soldiers to take a vaccine since the anthrax vaccine — a decision that killed and injured several soldiers.” He quoted a pro-life naval officer who will be forcibly discharged if he doesn’t take the vaccine.

“There’s no scientific basis for any of this,” Carlson stated and quoted the Department of Defense’s own statistics, which are that of the 202,567 active duty service members who have had COVID-19, 26 have died. This represents a better than 99.987 survival rate.

“The government is purging the military, and spying on its own citizens, because of a virus that isn't killing very many people anymore,” Carlson said.

“And keep in mind: vaccination isn’t like voting. They don’t trust you to do it yourself at home and mail in the results. They’re keeping track. How East German is this country becoming?”

Carlson concluded his monologue by contrasting the FBI crackdown on fake vaccination cards with the FBI’s lack of action on illegal immigrants’ fake drivers’ licences and fake social security cards. He accused the Biden administration of having a double standard and called on Americans to resist the transformation of their nation.

“The people running the government have one standard for enforcing the law for people who agree with them, and a different one for those who don’t agree with them,” he said.

“That is third world,” the host added.

“Now those same people just gave themselves the power to read and censor your text messages. We’ve got to resist this. You can’t let this continue — or else you’re going to wake up in a very different place from the place you were born.”