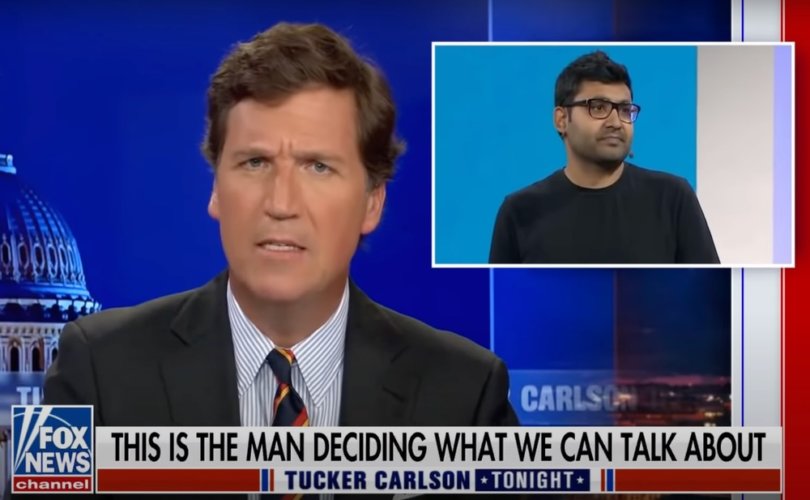 “Twitter is now run by a man called Parag Agrawal, who has said plainly he does not believe in free speech,” Carlson said during a March 23 broadcast in which he spoke about the widespread confusion and censorship surrounding the definition of gender and sexuality.

RELATED: Daily Wire releases trailer for Matt Walsh’s ‘What is a woman?’ documentary

Carlson, who last week joined Turning Point USA founder Charlie Kirk and Christian satire website The Babylon Bee in being censored from Twitter for implying that men cannot be women, torched the Big Tech company for stifling speech that conflicts with the ideological views accepted by the corporation.

Kirk, Babylon Bee editor-in-chief Kyle Mann, and Carlson have all refused to delete the tweets that Twitter flagged under its “hateful conduct” policy.

In his tear-down of the Big Tech company’s policies, Carlson noted that Agrawal came to the U.S. to attain a college education at Stanford, and has since become the leader of “the single most important forum for America’s political conversation.”

“That is a big and important job,” Carlson said. “It’s not just a public company. It’s much more than that: It’s a kind of public trust that allows this democracy to function. So you think you’d want a guy like that in a position like that to have some respect for his adopted country’s core institutions beginning with and primarily the First Amendment.”

Instead, Carlson said Agrawal has “no respect for our First Amendment or our Constitution,” and replayed an audio clip from 2020 in which Agrawal — who became the corporation’s CEO in November 2021 after Twitter founder Jack Dorsey’s decision to step down — explained that the mega-corporation should “focus less on thinking about free speech” and instead aim for fostering “healthy conversation.”

“Our role is not to be bound by the First Amendment, but our role is to serve a healthy public conversation,” Agrawal said in October 2020 on the In Machines We Trust podcast. “And our moves are reflective of things that we believe lead to a healthier public conversation. The kinds of things that we do to work about this is to focus less on thinking about free speech, but thinking about how the times have changed.”

“One of the changes today that we see is [that] speech is easy on the internet. Most people can speak but our role which is particularly emphasized is who can be heard,” he added.

In his commentary, Carlson blasted Agrawal for asserting a “new standard” for speech.

“So the new standard isn’t your right as a citizen to say what you believe is true, the new standard is achieving something called ‘healthy public conversation,’” Carlson said, noting that Americans have grown up in a country in which they were free to speak their minds, a right now threatened by Big Tech monopolies.

According to Carlson, in a culture in which speech “is disseminated to other citizens via social media,” Agrawal’s Twitter “actually controls what you’re allowed to think.”

“So what is healthy public conversation? What does that mean exactly?” Carlson asked.

The Fox News commentator, whose night-time talk show “Tucker Carlson Tonight” broke the record for highest-rated program in U.S. cable news history in 2020, said his team reached out to the Twitter executive and his office for comment multiple times but received no reply, leading Carlson to assert that since “Agrawal was too cowardly to respond to us,” “we’re going to have to assume that a ‘healthy public conversation’ is whatever Parag Agrawal wants it to be. He decides the meaning.”

“In other words, a single man who has total and undisguised contempt for America’s most basic values gets to decide what Americans are allowed to talk about,” he said.

“He doesn’t think you should be allowed to discuss basic biology in public. We’re erasing all science, because it’s unhealthy. So now you’re not allowed to talk about it. In fact, you’re banned, silenced, censored,” Carlson continued, asking “how do you feel about this new standard?”

“What happened to all the liberals, and the self-described civil libertarians we used to have in America? They don’t seem to be fighting the power anymore. They seem to have joined it,” Carlson continued, slamming left-leaning Republicans Liz Cheney and Adam Kinzinger along with “everyone else who’s constantly lecturing the serfs about ‘democracy.’”

“Is this the kind of democracy they’re talking about?” he asked. “A democracy in which a tiny sliver of very rich people control everything, including your mind? Doesn’t sound like democracy. It sounds suspiciously like oligarchy, don’t you think?”

Carlson closed his commentary by inviting all those who support Twitter’s censorship, up to and including Parag Agrawal himself, to come onto the show for a “healthy conversation.”