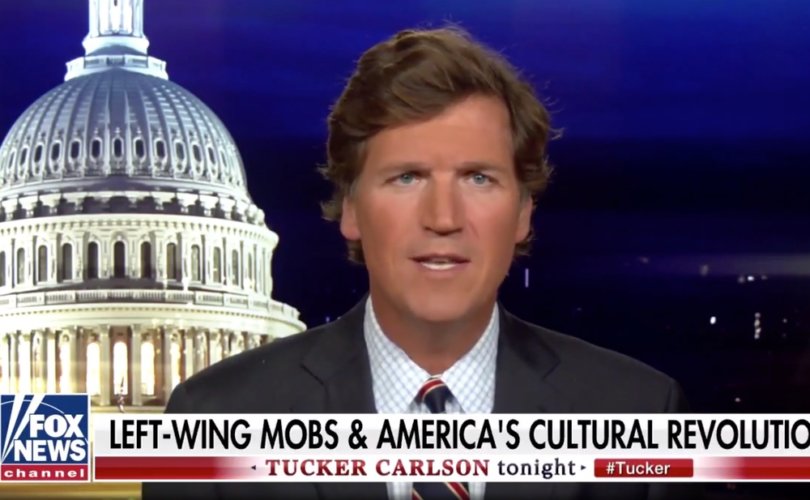 WASHINGTON, D.C., June 25, 2020 (LifeSiteNews) – Fox commentator Tucker Carlson stated that the vandals destroying public property across America, including the pulling down of historical monuments, are not really “protesters” or “rioters” but thugs pursuing the goals of the Democratic Party.

“They're the armed militia of the Democratic Party. They're working to overthrow our system of government. They're trying to put themselves in power,” said Tucker during his June 24 “Tucker Carlson Tonight” show.

Carlson pointed out what he called the stupidity of the rioters and the hidden purpose of the riots across the United States.

“At this point,” Carlson said, “it is pretty clear that nothing is what we're told it is. These are not protests. This is not about George Floyd. It's not about ‘systemic racism,’ whatever that is.”

“These are definitely not protesters,” he continued. “They're not even rioters.” It was at this point that Carlson linked the vandals to the Democrat Party.

While protests across America began ostensibly in response to George Floyd’s horrific death while in police custody, the protesters have since moved in an entirely different direction.

While rioters vandalize shops and monuments, plunging the states into chaos, Antifa, a left-winged terrorist group, teaches how to inflict the most damage on police during riots. The pro-abortion and pro-LGBT Black Lives Matter organization (BLM), one of the major groups behind the riots, has been shown itself to be more committed to remaking America and American values than protecting all black lives.

Carlson, in his show, pointed out the stupidity of the actual rioters and protestors. “These people are idiots – for real.”

The people setting fire to restaurants and destroying statues, Carlson remarked, are “truly and utterly stupid.”

“They know nothing. They couldn't tell you who George Washington was. They don't know when the Civil War was fought, probably not even to the century.”

“They say they oppose racism, and then they rip down monuments to abolitionists. They don't see the contradiction in that because they have no idea who the abolitionists were. They think it's a band from the 80s.”