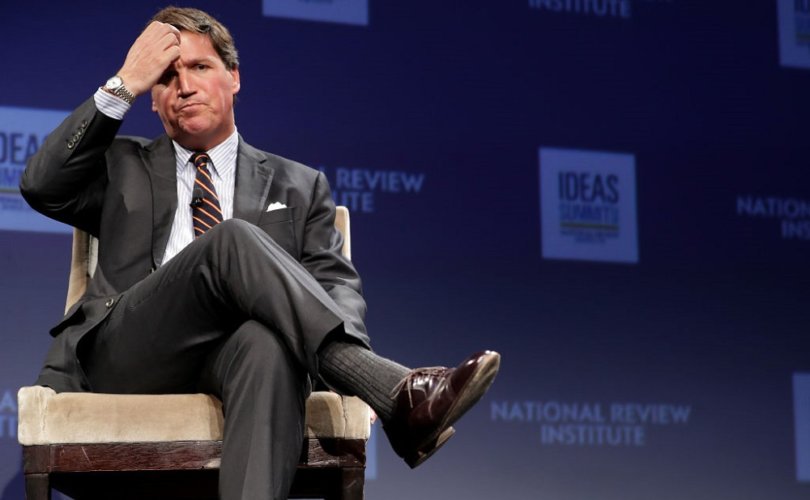 WASHINGTON, D.C., February 20, 2020 (LifeSiteNews) — Many of America’s most influential leaders have betrayed their country for pay, Tucker Carlson said in a scathing segment earlier this week.

The Fox host said communist China is becoming a “dangerous enemy” and the reason for many of the chief problems developing the U.S. today.

“China is no longer simply an economic rival of the United States; it’s becoming a dangerous enemy,” Carlson said.

“But instead of protecting us from this threat, an existential one, our leadership class collaborates with the other side,” he continued.

“Why do they do that? Simple. They're getting rich from it.”

Carlson named leaders from sports, politics, academia, and business to illustrate examples of influential Americans willing to throw American values and freedoms under the bus for Chinese cash. His first examples were Daryl Morey, the general manager of the National Basketball Association, and star basketball player LeBron James.

“And then LeBron James weighed in and explained to us that, actually, freedom of speech in America is vastly overrated.”

The host played a clip of James telling people to be “careful” in what they tweet, say, and do because a “a lot of negative” comes with freedom of speech.

The Fox host also shined a spotlight on the activities of China-born Yu Meng, the chief investment officer at the state of California’s pension fund, CalPERS.

“Meng, who was born in China and moved here at the age of 25, previously ran China's $3 trillion portfolio of foreign investments,” Carlson said.

Now CalPERS invests in companies that supply the Chinese military and has invested in Hikvision, which makes the surveillance equipment China uses.

Carlson also revealed that Meng had worked for a program that seeks to empower China at the West’s expense.

“When Meng worked for a Chinese investment fund, he was recruited by the Thousand Talents Initiative — that's a Chinese program designed to encourage foreign businessmen, scientists and other experts to work on China's behalf, often secretly,” Carlson said.

“The explicit goal is to obtain Western technology and research for China's own use so they can surpass us, which they are.”

Part of the reason for this is that even America’s leading universities are accepting Chinese money. Carlson recalled that last month, the head of Harvard’s chemistry department was arrested for lying about the work he was doing for China. Carlson believes that this isn’t a special case, for the academic world is “addicted to Chinese money.”

“Harvard and Yale both stand accused of hiding hundreds of millions in donations from payments from foreign countries,” the Fox host said.

“Needless to say, China is one of the top contributors,” he continued.

“Recently, the Texas A&M University system tried to gauge how many of its faculty were getting Chinese money. More than a hundred of them had been recruited, it turns out, but only five had reported their work for a hostile foreign government. How many were indicted? Your guess? Oh, yeah ― zero.”

China is able to steal research and technological innovation from the United States through such professors and their Chinese graduate students, Carlson suggested.

The host then took aim at businesses, like Disney and the Gap, that bow to China’s imperialist attitudes toward Tibet and Taiwan, and at businessman and presidential hopeful Michael Bloomberg, who has denied that Chinese strongman Xi Jinping is a dictator. Bloomberg also has “enormous” business interests in China, Carlson reported, and his Bloomberg News heavily self-censors when it comes to corruption there.

However, the scariest relationship between Americans and China, Carlson said, is the growing dependence of the former on the latter.

“The scariest part is that as China has grown more powerful, America has grown more dependent on it,” he said and listed medical supplies as an example. Apparently, 80% of antibiotics used in the U.S. come from China.

“The saddest and most infuriating part is that none of this needed to happen in the first place,” Carlson said.

“China didn't just one day magically overtake us. Our leaders made that possible. They abetted it. They profited from it. They betrayed us.”

Steven W. Mosher,  author of Bully of Asia: Why China’s Dream is the New Threat to World Order, praised Carlson for his insight.

“Tucker Carlson and Laura Ingraham are both serious journalists who ‘get’ the China threat,” he told LifeSiteNews today.

“China is a threat across all domains,” he continued. “It is a military threat; an economic threat; and now, with the coronavirus, a threat to the health of people everywhere.”

Mosher said it sounds as if Carlson has read his Bully of Asia, which has made an impact on Capitol Hill. Steve Bannon, a former adviser to President Trump, told Mosher he has read his book twice. Peter Navarro, the director of trade and manufacturing policy for President Trump, is an old friend, Mosher says.

“It is a kind of personal vindication for me to have the arguments that I have been making about the growing China Threat for the past twenty years finally become official administration policy and mainstream journalism,” Mosher told LifeSiteNews.

“And just in the nick of time. This year, 2020, was the year that the pundits said China would overtake the United States as the dominant global economic power. Now it appears that day is still a long way off and — now that America has woken up to the China Threat — may never happen at all,” he continued.

“When President Reagan was asked what his policy towards the USSR was, he famously said, ‘We win, they lose.’ This is essentially Trump's policy towards China. And as we all know, he never gets tired of winning.”