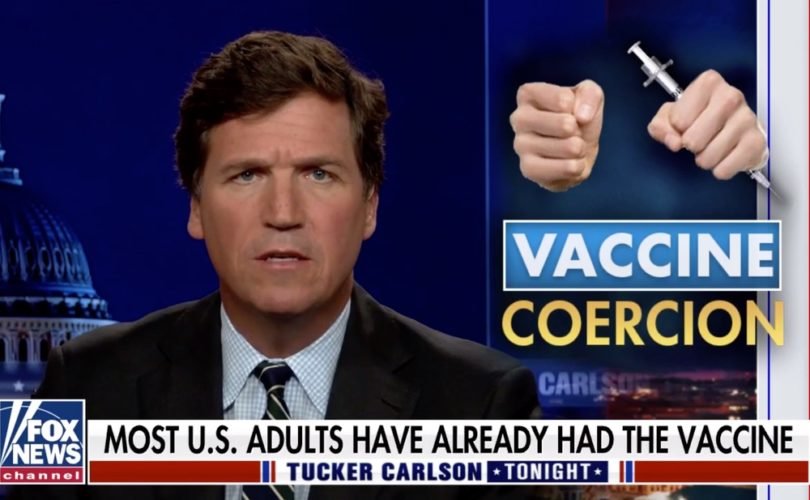 July 12, 2021 (LifeSiteNews) — Despite a “waning” pandemic, and “zero scientific evidence” to support such a policy, U.S. government officials are now signaling forthcoming policies of forced “vaccination,” as reported by Tucker Carlson.

In his Thursday night opening monologue of the Tucker Carlson Tonight show, the host of the highest-rated program on cable news described that due in part to a soft intimidation campaign characterized by the phrase “get the vaccine or else,” the Biden administration has accomplished “something amazing” in that 67% of adults in the country have reportedly received experimental COVID-19 gene-therapy injections (including only 50% of working-age adults).

But, this means “there are still holdouts,” according to Carlson. “These are not people who haven’t heard of the vaccine or can’t afford it or can’t just find a dose. It’s free, it’s everywhere and the media never stop talking about it. Every news hour is a Pfizer commercial.”

“These are people who just don’t want to take it,” he said, and for some very good reasons as well. Such individuals may have “already recovered from COVID and have active antibodies” negating any need for a vaccine. Or they may have religious objections which Carlson adds, “used to be considered a valid reason, back when our leaders acknowledged God is more powerful than themselves.”

Others, he says, noticed that the novel gene-therapy injections were “developed very quickly” and still lack approval by the Food and Drug Administration (FDA), while still others recognize “the stunningly high death rate on the government’s vaccine harm database, or the reports of young people developing cardiac emergencies in response to the shot.”

Either way, “at this point, it doesn’t matter anyway,” according to Carlson, as “the Biden administration is no longer accepting excuses.”

Citing an interview on CNN with the radically pro-abortion secretary of Health and Human Services, Xavier Becerra, Carlson rests his case, that when it comes to receiving potentially deadly experimental COVID-19 gene-therapy injections, “the Biden administration is no longer pro-choice.”

In the interview, Becerra said, “We want to give people a sense they have the freedom to choose but we hope they choose to live” [emphasis added].

Becerra also stated that since the federal government has spent so much money to combat COVID-19, “it is absolutely the government’s business,” to know who has and has not been vaccinated.

Carlson summarized how the government no longer seems to even be arguing that we’re in a health emergency anymore, as the “pandemic is waning.” Instead, due to the enormous amounts of tax dollars spent, they propose “the Biden administration has a right, effectively, to go door-to-door to intimidate you into taking the [experimental] vaccine and keep track of you if you don’t.”

“It’s hard not to think that we have reached a major new precedent. Something new is happening,” he said.

Given the vast amounts of funds the federal government spends fighting all sorts of diseases, Carlson asks “does the Biden Administration [now] have the right — based on the money they spend fighting these diseases — to your medical information? Do they have a right to know your HIV status? Why not? Can HHS force you to take antibiotics for your TB? How about Xanax for your anxiety? Thorazine for your mania?

“And while we’re at it, why are we letting irresponsible, defective people reproduce? Vagrants, mental patients, even QAnon people, all are allowed to have children? Why is that? Why aren’t we sterilizing them?” he quipped.

“Sound crazy? It’s happened before, on a huge scale,” he said.

“So, in response to the atrocities that have been committed in previous generations in the name of ‘science ‘and ‘medicine,’ medical privacy, physical autonomy, the right to control the medicines you take — these are the pillars of medical ethics, officially. Or [they] were. They no longer are. Tony Fauci has declared them merely a ‘political statement.’ “

In a recent MSNBC interview, Dr. Anthony Fauci, Biden’s chief medical advisor, said that those who are declining the injections should “Get over it. Get over this political statement. Just get over it.”

— Article continues below Petition —
PETITION: No to mandatory vaccination for the coronavirus
Show Petition Text
1079863 have signed the petition.
Let's get to 1100000!
Thank you for signing this petition!
Add your signature:
Show Petition Text

In summation, Carlson interpreted Fauci’s statement as “Get over it. You don’t have a right to disagree, you must take this medicine.”

Carlson then went on to describe the “well-trod” and “scary” road the nation is on which brought about tragedy last century when a “Swedish-born pastor named Henning Jacobson … refused to take the government-mandated smallpox vaccine.”

Though he had already had the vaccine as a child, and it almost took his life, his challenge to the mandate went all the way to the U.S. Supreme Court where he lost the case.

Following form this new precedent where the government can force medical procedures, the Commonwealth of Virginia “passed a law authorizing the involuntary sterilization of people the state deemed to be ‘feeble-minded,’ or mentally ill, undesirable,” Carlson explained.

“By 1930, dozens of states were forcing women to undergo involuntary sterilization, and in the end, more than 60,000 American women were sterilized by the government against their will.

“That happened. Famously. And we shouldn’t be surprised by it,” he said.

“Things like that tend to happen when a distracted submissive population allows the government to dictate what medical procedures they get, what drugs they take,” Carlson said.

Though this is such a “well-known and horrifying chapter in American history,” the Fox News television host went on to lament that instead of reporting on it and warning the public about such potential tragedy in the future, CNN media anchor John Berman, “begs this administration to make vaccines mandatory.”

With members of the media “demanding forced vaccinations,” Carlson also grieves that “organized groups of sensible people,” such as veterans remain silent “as the Pentagon floats the idea of mandatory vaccinations for all soldiers. Now, there’s zero scientific evidence that this could be necessary for any health-related reason whatsoever, but they’re pushing forward [with it anyway].”

The Fox News host goes on to recall when the Pentagon required soldiers in Iraq to take an untested experimental anthrax vaccine over twenty years ago.

“What happened?” he asked. “Many of those soldiers are eligible for disability benefits through the VA, because that vaccine caused serious long-term complications. Those included infertility, lupus, paralysis, blindness, and neurological damage.

“Those effects weren't obvious at first. They took years to surface,” Carlson reported.

Further, with astonishment, the television host showed a former Air Force veteran acting as a “military analyst” on CNN advising the Biden administration to “waive the informed consent requirement and go ahead and make [the injections] mandatory” in the military. “And then those who decide that they're not going to take it are literally in violation of a lawful order and then they can face consequences under the uniform code of military justice,” the analyst proposed.

“Uh huh. You can go to prison for not taking the vaccine,” Carlson mused. “Court Martials for anyone who refuses to take an experimental vaccine to stop a pandemic that has already ended.”

“What’s going on here? It’s so obviously unnecessary, that it’s vindictive and it makes you wonder, what this is really about? At the very moment that the risk for young people dying from the coronavirus has hit essentially zero, they're telling us that young people, soldiers, should be arrested and go to jail if they don't submit to the vaccine. They're telling you that you'll wind up in a government database if you don't comply, and that government agents will be showing up and knocking on your door. What is happening? What is this about?” Carlson concluded.