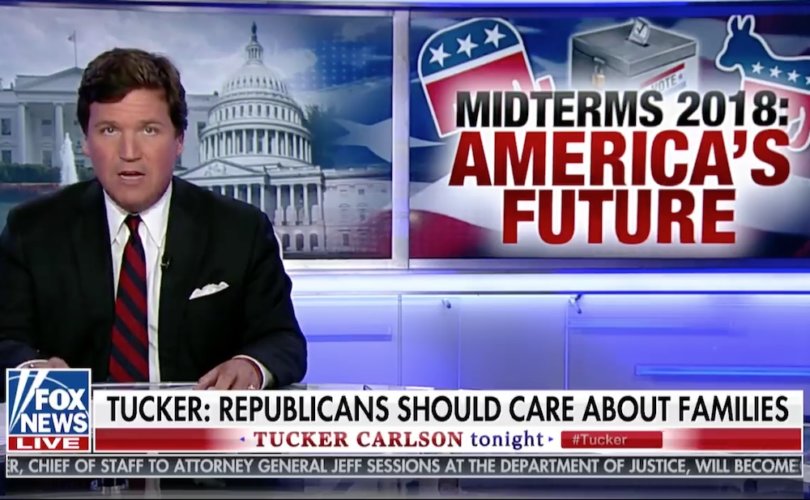 WASHINGTON, D.C., November 9, 2018 (LifeSiteNews) – On the same night an Antifa mob targeted his family for intimidation, Fox News host Tucker Carlson delivered a monologue warning that neither the United States nor the Republican Party would survive without a renewed commitment to restoring families.

Members of the extremist group Smash Racism DC gathered in front of Carlson’s Washington, D.C. home Wednesday evening to, in their own words, “remind you that you are not safe.” They chanted that the conservative pundit and Daily Caller co-founder is a “racist scumbag” who should “leave town,” and threatened, “we know where you sleep at night.”

A member of the group who cracked the front door drove Carlson’s wife Susie, the only one home at the time, to lock herself in a pantry and call the police. Carlson was at Fox’s D.C. office preparing for his nightly broadcast, and Susie didn’t contact her husband because she didn’t want to distract him before going on the air.

That evening, Carlson delivered impassioned remarks suggesting that the GOP lost the House of Representatives the day before partly because it’s neglected the importance of family.

“There’s nothing wrong with tax cuts, but Republican strategists seem to forget that a huge percentage of Americans don’t pay federal taxes,” he said. Instead, “their concerns are tangible concerns. What does gas cost? Can I afford to live in a safe neighborhood? Will I go bankrupt if I get sick?”

Carlson argued that whichever party “effectively addresses these questions generally wins elections,” and a “big reason” for Republicans’ defeat was that they “tend to ignore these questions.” But he added that something more significant is at stake.

“The Republican Party is a conservative party. Republicans are supposed to care about families, not just a little bit, but above all,” he said. And yet increasingly the American family is vanishing. “Young people can’t afford to get married or have children. Take a look at the numbers sometime,” which “foretell an ominous future for all of us.”

“A country without strong families is a weak country. It is a volatile place, a chaotic place. It’s a place susceptible to political demagoguery. It’s what America is becoming,” he warned, alluding to the rising tide of left-wing anger that struck his household that night. “If you want to stop that slide, support families. It’s that simple.”

“If your supposedly conservative economic program doesn’t make it easier for young people to get and stay married and have kids, how is it really conservative?” he asked. “If couples are too poor to have children and you’re not helping, why should I as a conservative vote for you?”

“I should not vote for you; I will not vote for you. I will work against you; that is my pledge,” Carlson declared in conclusion. “Supporting marriage and children is the best, maybe the only way for Republicans or any of us to save the country.”

The GOP continues to take a pro-life, pro-family stance in its official platform, though in its latest congressional term failed to defund Planned Parenthood or repeal Obamacare despite controlling both elected branches of the federal government. Most national Republicans have dropped active opposition to same-sex “marriage,” as well, claiming to disagree with it while declaring the matter “settled” by the Supreme Court.

D.C. police say that a criminal investigation into the threats against Carlson’s family is underway, but no arrests have yet been made. Many prominent liberals have condemned the Antifa group’s actions, but Vox co-founder Matthew Yglesias claimed he was “utterly unable” to empathize with Susie Carlson, and understood the group’s intentions to make the family fearful.