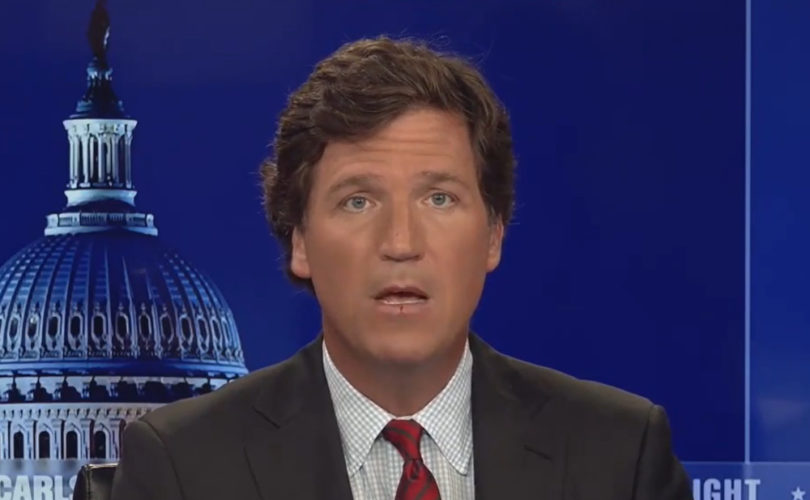 (LifeSiteNews) — In a sobering and even chilling monologue on Monday, Fox News host Tucker Carlson raised alarm over the U.S.’s dangerous and rapid incremental escalation of war with nuclear-armed Russia.

As has been shown elsewhere, neoconservative and liberal hawks in both major parties were “irate” when Russia’s Vladimir Putin intervened in August 2013 to broker a peaceful solution to their desired bombing of Syria. At this point, they immediately retaliated by facilitating an anti-Russia coup d’état in Ukraine six months later.

This reckless animus against Russia among many American elites has been manifested ever since with, for example, Hillary Clinton promising, as the 2016 Democratic presidential nominee, to implement a no-fly zone over Syria if elected, facilitating a direct conflict with Russia. This hostility has also been seen in the fabricated narrative that Donald Trump was a Russian asset and, as Carlson points out, the bizarre blaming of Russia for Clinton’s loss of the 2016 election.

Instead of trying to understand why they lost in 2016 to Donald Trump, the Fox News host observed “Democratic leaders instead immediately set out to find somebody else to blame for the election results. And soon they settled on Russia.”

In his estimation, the left began to believe and act upon this narrative even though there was no evidence for it. “Democrats have convinced themselves that Russia stole the presidency, which rightfully belonged to Hillary Clinton,” he said. “And that’s why they are taking us to war with Russia.”

Reasoning that the West’s intentional advancement of this war is certainly not about “saving democracy,” or “protecting the sacred borders of a sovereign country,” or “helping the Ukrainian people,” Carlson rationally concluded, “The war in Ukraine is designed to cause regime change in Moscow.”

“If you wanted to save Ukraine, its people, its infrastructure, its nation, you would push for a settlement now. You would have done it two months ago, but they’re not doing that. They’ve rejected it out of hand,” he said.

Thus, it only makes sense that the goal is “to topple the Russian government” as a “payback for the 2016 election. So this is the logical, maybe the inevitable end stage of Russiagate,” Carlson said.

To support his claim, he showed a clip of hard-left Democrat Rep. Adam Schiff of California from two years ago explicitly saying “the United States aids Ukraine and her people so that we can fight Russia over there and we don’t have to fight Russia here.”

Also supporting his case were clips of other Democrat members of the U.S. House of Representatives visiting Kyiv last weekend, informing Ukrainian President Volodymyr Zelenskyy and the rest of the world’s press that the current war with Russia is not almost over but only just beginning.

“Really?” Carlson asked. “Some of us were under the impression, based on their public statements, that we were defending the sovereignty of another country, Ukraine, that it’s not up to us, it’s up to the voters of Ukraine because Ukraine is a democracy. But here’s Congressman Crow telling us we’re not going to accept a ‘stalemate.’”

Democrat House Speaker Nancy Pelosi revealed American policy supported an ongoing war into the indefinite future. She told the former degenerate comedian president, “Your fight is a fight for everyone and so our commitment is to be there for you until [the] fight is done.”

“How did we get here exactly? Do you feel betrayed?” the Fox News host asked.  “You probably didn’t think you were signing up for this. Nancy Pelosi telling us we’re in a war with a nuclear-armed power with no clear end date.”

Schiff, whom Fox News host Sean Hannity once called “the worst liar in politics,” went on to publicly state, “We are determined to do everything in our power” to ensure “Ukraine is victorious … We are proud to stand shoulder to shoulder with Ukraine and will until victory is won.”

“This is the most reckless foreign policy in our lifetimes, in American history,” Carlson said. “You are watching a group of decadant, in some cases, senile leaders, casually dismiss the consequences of going to war with the nuclear-armed nation, dismiss the consequences of nuclear war, like it’s not even worth thinking about.  But it is worth thinking about!”

“They tell us daily, Vladimir Putin is evil and insane and that may well be true. But this same man has threatened to use nuclear weapons against the United States and western Europe if this continues and why don’t we believe him?” Carlson asked.

Though the Western media gave it scant coverage, the Fox News host of the highest rated program in cable news history found it enormously relevant to highlight a recent statement by Russian Foreign Minister Sergey Lavrov warning that the danger of nuclear war is “serious. It is real. It cannot be underestimated.”

“So what they’re saying is ‘we will use nuclear weapons against you and your allies if you don’t back off,’” the host explained.

Two years ago, Putin revised Russia’s nuclear deterrent policy. “The new policy allows Russia to use nuclear weapons in response to a conventional strike. That means some sort of non-nuclear provocation,” Carlson said.

Furthermore, in March, former Russian president Dmitry Medvedev “warned Joe Biden that Russia would indeed use nuclear weapons against the West in response to any ‘act of aggression that is committed against Russia and its allies.’”

Carlson argued that such an act of aggression could look like the Pentagon’s “reckless” assistance to the Ukrainian army last month in shooting down a Russian plane transporting hundreds of soldiers and “then bragging about it to NBC News.”

“We do know that Putin has placed Russia’s nuclear forces on high alert and again, Russia has the largest nuclear arsenal in the world, and again, why wouldn’t he use those weapons?” Carlson asked. “They tell us daily he is evil and insane, and he may well be.  [Are provocations such as this] a risk? Yeah, but no one in Washington seems worried in the slightest.”

To further illustrate, Carlson also showed a clip of Republican House Rep. Michael McCaul of Texas, whom he described as a “widely regarded … mouthpiece for the Intel agencies.” McCaul argued that should there be chemical or nuclear weapons used in Ukraine “we would have to respond in kind.”

“All of a sudden, you have sitting members of Congress with access to high-level intelligence talking casually about using chemical weapons or nuclear weapons against a nuclear-armed state,” Carlson observed.

“So it’s not a defense of Russia. You don’t have to believe Russia was justified in invading Ukraine,” he said.  “It’s not a defense of Putin to think to yourself, ‘Hold on a second here. How did we get here? Talking about nuclear war on the Sunday shows. Should we be? Are we ready for that?’

“It’s clear no one in the Biden administration cares or is worried about it at all. The escalation continues at a remarkable pace, and you know that if you watch the money,” Carlson advised.

He went on to highlight the billions of dollars the U.S. has been handing over to Ukraine, which has been considered “one of the most corrupt” governments in the world. This includes a $33 billion dollar package being currently pushed through Congress by the Biden administration that, according to Carlson, includes “longer-range artillery.”

“In other words, we’re sending artillery to Ukraine that could easily strike Russian territory and we’re sending $33 billion to do it,” he explained.

For these reasons, Carlson concluded, the U.S. “is speeding toward one of the great disasters in our history.”

‘Monumental provocation’: How US and international policy-makers deliberately baited Putin to war
The secret to peace in Ukraine lies in Our Lady of Fatima’s call to prayer and penance
UN chief warns nuclear war ‘within the realm of possibility’ as Russia-Ukraine conflict continues
How much does the LGBT agenda have to do with the conflict in Ukraine?
‘They’re using Ukrainians as human shields’ to ‘build back better’: Remnant’s Michael Matt